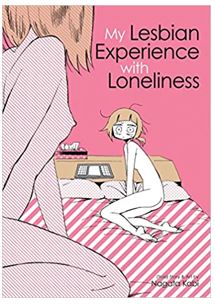 Kabi Nagata creates a beautiful world of simple, soft drawings with beautiful shades of pinks, white, and black. The imagery draws you in and make you connect with the cute depiction she’s made of her likeness, as well as her experience. This book is recommended for teens older than 16.

Welcome to the feeling of helplessness and hopelessness of a 28-year-old who’s never had sex, never had a career, and is in the deep nasty pits of depression. According to Anxiety & Depression Association of America , “Somewhere between 30 and 60 percent of lesbians, gay men, bisexuals, or transgender people deal with anxiety and depression at some point in their lives. That rate is 1.5 to 2.5 times higher than that of their straight or gender-conforming counterparts.” LGBTQIA+ people are more prone to depression due to living in a world that does not accept or respect their identities. Reading this book, you get a painfully vulnerable glimpse into Nagata’s transition from high school into college, becoming a drop-out, trying to find family and community at a part-time grocery gig only to fail miserably, and eventually rising into a manga career. Her depictions of self-harm and suicidal thoughts might be triggering for some readers. It’s a tale of finding oneself.

Nagata grapples with a deeply felt sense of no self-worth. This is where her binge and restricted eating disorder behavior stems from, as well as self-harm of cutting and trichotillomania. The author explains why cutting helped her with inner, untold pain, which could trigger some readers.

Nagata masterfully shares experiences of her body that won’t always obey her demands… the feeling of a lack of control and of mysterious symptoms. As someone who’s had mysterious symptoms without an appropriate explanation from doctors for years, I related to her searching for reasons as to why her body was acting the way it was, only for a doctor to shrug and tell her to rest more.

She shows you the feeling of reaching rock bottom. She gets angry that she’s thinking about dying and hasn’t pursued dreams or tried things she always wanted to try. For those who’ve been depressed, her descriptions of not showering, wearing dirty clothes for days, trying one’s hardest and being confused why it’s not producing results, fatigue, and malaise are familiar.

She explores repressed sexual desires and briefly the notion of gender. She reflects on her childhood, her clinginess, and shows the behaviors of a child who experienced domestic violence (though she has no memory of experiencing such a thing). This thought stream helps her recognize how her terrible feelings of self-loathing and her self-loathing behaviors may all stem from trying to be who her parents want her to be, and not who she is. She does address sexual desires towards her mother (which she knows is uncomfortable, as she’d much rather be physically close to a non-relative woman) and brings up the article “I Want to Be Held by a Plump Older Woman” by Eiko Tabusa, bringing context to the experience. She shows a feeling that many queer people experience—the desire to be cared for by an older, stronger, more capable queer person (whether it be in a sexual, platonic, or more parental way).

I wish I could read more from her about her experience with gender but this may be expanded on in her other translated books. There is a fascinating page where she goes deeper into why she wanted to pursue women and not men (on top of being more sexually interested in them); and it was because being with a man made her seen by others more rigidly as a woman, which she did not want. She wanted to be seen as herself before being seen as a woman, and that definition of womanhood scared her.

A large theme throughout the book is reckoning the opposing desires of who your parents want you to be vs. who you are (and she struggles to know who she is in the first place). Nagata continues living with her parents under the misguided notion that she can’t live on her own until she has a full-time job; even though she had saved a lot from her part-time jobs and thought she could move out.

After much thinking, Nagata decides to do something about all of her repressed sexual feelings toward women by hiring a lesbian escort in her neighborhood and checking in at a love hotel. Understandably before she books the service online or attends the appointment, she deals with a lot of guilt, concern, and worry about if she can meet this escort or if the parent-created idea of herself will win in the end.

Documenting her experience, as well as her struggles with her career, interviews, and doing what she loves, this piece feels like an amber gem, fossilizing a period of her life for us to enjoy for decades to come.