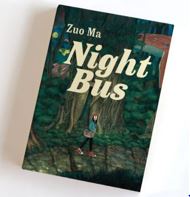 Zuo Ma is pseudonym for Zou Jian. He’s published, in China, a short story collection, Walk, and Night Bus. The translated (by Orion Martin) collection, Night Bus, is the combination of both these works. Night Bus appears after the first three short stories; and is followed by seven more short stories. Night Bus is about 210 pages. Now that I’ve explained what I’ve understood, let me provide my guess at what it’s about. Night Bus is the artist/author’s creativity applied to the delusions of his grandmother as her dementia/Alzheimer’s disease progresses for the reader to watch. In addition, we feel some nostalgia as the author strolls around his deteriorating childhood rural world.  I don’t have much to write without slipping into Night Bus being an allegory which means … whatever I want it to. Later stories are no more enlightening from bugs being tortured while anthropomorphic dogs are more humane than the human perpetrators. The last short story, The Walk, in a slightly different form, was also part of Night Bus. My suggestion: enjoy the imagery and skim the sparse words.

The only thing that appears to make sense in this seemingly senseless graphic work is that it’s an attempt for the reader to feel dementia as if living it. There are only flashes of characters in their “normal” state, while we see giant aliens, bugs, plants, roving vehicles (like the “night bus” moving as a trolley on tracks, then hoisted through tree canapes and mountainscapes). Since the reader has little to grasp onto, there isn’t much helpful information with respect to dementia or Alzheimer’s disease and its treatment. Instead, the reader just lives the delusion as the grandmother does. And that might be ok, because there are no curative treatments for Alzheimer’s to prevent or end the worst symptoms; there might be some treatments that slow its progress, but nothing that works consistently. Unfortunately, all I can write here is that that’s perhaps what the author is trying to say: that Alzheimer’s/dementia is incredibly frustrating, and perhaps living that frustration is something that might be educational, spur research, allow caregivers to ride the confusing wave of the person they care for, and know they have no control of what happens. Otherwise, I as a reviewer, have little to discuss besides the beautiful, fantastical drawings coming from the mind of an artist/writer who’s flexing his skills.

At times, the delusional characters make more sense than relatives of the grandmother. Early on the grandmother is a giant fish, who’s eating worms and fish soup (soup for fish? Or soup made of fish?) The one repeating line by the grandmother to her 28-year-old grandson (Xiao Jun)—long past graduating—is if he’s keeping up with his schooling. There are other characters, real or imagined, with similar names (Xiao Xiang, Fang Xiaoming, Jiu Jiu). And the author/artist seems to put in an appearance—as the grandchild—by showing him drawing the scene the reader just watched unfold. Nothing is as it seems or it’s exactly as it seems: a confused, frustrating—and all related synonyms—jumble of events with few connections. Art pieces that should fall, because they’re precariously stacked; stays balanced until a bug topples it … or not. And don’t forget about the “cocoon room” for no particular reason. There are cats that put in an appearance.

And grandma sits in the dark hiding her medicine, such as it is; and eventually moves on to a hospital. Anything goes (e.g., buildings might be traveling creatures); metaphorically-speaking it could be everything/anything/nothing; catching or being caught by imagination? At about five-eighths in Night Bus, the author/artist (I think) says “I’ve finished more than half of it … But I’m having trouble tying it all together.” (247) Aren’t we all?