Home / Comic Reviews / Editor's Picks / Not Funny Ha-Ha: A Handbook For Something Hard 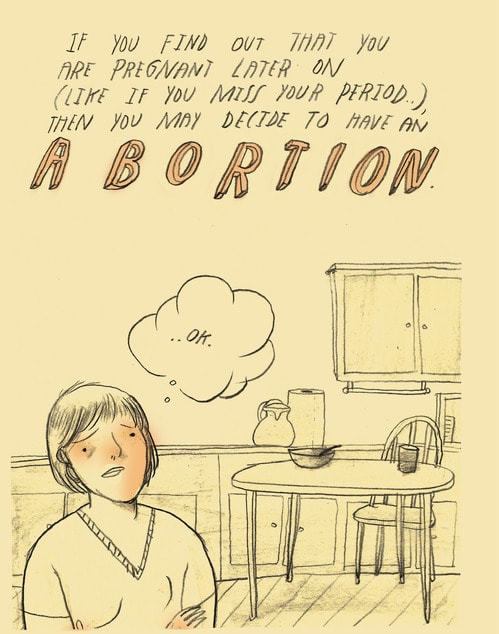 With the recent controversy surrounding the supposed trafficking of fetal tissue by Planned Parenthood, abortion has once again crested the American news cycle. Simultaneous legal efforts to ban abortion, from the recent shuttering of clinics in Texas to a sustained campaign by Republican states to defund Planned Parenthood, have put abortion proponents on the defensive.

As Katha Pollitt pointed out in a recent New York Times op-ed piece, pro-choice activists have been forced to utilize visceral, and often, graphic language in defense of a woman’s right to choose. Instead of describing women who receive abortions as rational actors, they are painted as victims of rape and incest, incorporating the inflammatory language of the right-to-life movement in order to enact a defense against it. It is, as Pollitt describes, a self-defeating stance. She argues that abortion is not only an individual right but also a benefit to society. The sooner that people, both women and men, are unafraid to soberly discuss this in public, the sooner that a salacious discourse will dissipate and, hopefully, change for the better will occur.

Enter Leah Hayes and “Not Funny Ha-Ha”, subtitled “A Handbook For Something Hard.” Hayes’s short and beautifully illustrated graphic novel is the corollary to Pollitt’s argument writ comfortably small. Compact and accessible, “Not Funny Ha-Ha” seeks to educate its readers calmly and discuss a controversial topic in a way that engenders further conversation. I liked it for its approachability, but I respected it for the way that it opened doors towards a personal conversation the way a more highly charged work might not.

Instead of entering the dialogue directly, Hayes opts to explore the emotional and physical procedures that choosing an abortion inevitably entail. Step-by-step, she walks the reader through the mundane but heart-wrenching checklist that someone terminating a pregnancy will have to follow. Who do you tell when you find out you’re pregnant? What procedure will you have to abort the fetus? Where will you have the abortion, at a clinic or at home?

Although her protagonists, Lisa and Mary, must go through the procedure by themselves, they are surrounded at every step by best friends or family members, healthcare providers, and, of course, the watchful eye of the reader. Lisa and Mary’s journey reminds you that while the psychic recovery from an abortion will take a bit longer than the physical one, they will inevitably recover, unmarred and with their lives ahead of them. This realization, doled out as it is in measured language and illustrated by Hayes’s accessible, frame-free, sketches, is a counterpoint to the strong language that is tossed around in much of the public discussion regarding abortion.

As Hayes admits in her written conclusion to the book, she wants “girls to be healthy, happy, make good choices for themselves…and all I have is a pencil.” The lack of polarizing language and imagery, constrained by the boundaries of a “comic” medium, is in fact the book’s greatest strength. “Not Funny Ha-Ha’s” signal message—having an abortion is an intensely personal experience but you are not alone—is better served in low, assuring tones. After all, while Hayes may agree with Pollitt, and I suspect she does, this book wants to be your friend. Many women receiving abortions are at a fragile period in their lives. Give them friendship and community now, along with a healthy dose of education and humor, and maybe, hopefully, later they will raise the banners. But keep yelling at them, turn it from a handbook into a hand grenade, and we’re stuck in the same dialectic, screaming at each other until we’re blue in the face.