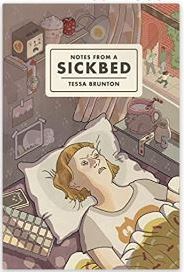 According to me-pedia.org, there are 17-30 million people worldwide with myalgic encephalomyelitis (aka, chronic fatigue syndrome) with .8-2.5 million in the U.S.; and “90% of patients are not diagnosed … [and] 25% of patients are severely ill and are either bed-bound, wheelchair bound, or are housebound or nearly so” or in the author’s case often couch-bound. Notes from a Sickbed by Tessa Brunton is about, as she writes, “… trying to figure out how to live with my chronic illness, often failed, improvised solutions, distracted myself, tried not to panic, and got by” (page 4) before she had the right diagnosis, which took six years from onset. There is no cure, but there are some tools that might help. She wrote, “My last healthy year was [age] 25 [93].” She saw a variety of healthcare providers, including allergist, acupuncturist, naturopath, four medical doctors, had numerous blood tests, food sensitivity testing, and infectious disease testing. These visits to health care providers aren’t shown in Notes from a Sickbed; rather, this work provides her life dealing with the fatigue. Her drawings often show rooms filled with objects (books, pictures, furniture, etc), two cats, and sometimes windows out to the wider world. To avoid boredom, that’s ever present, her inner mind often roams with a fantastical imagination—similar to that of Mark Alan Stamaty (creator of the Village Voice comic strip Washingtoons, and several books including, Too Many Time Machines, Who Needs Donuts, and Alia’s Mission)—filling the page with floating images of objects (books, food, a ghost, and more) to expand her closed quarters. Venting frustrations toward those who lead active lives, at least internally, is a common occurrence. I highly recommend Notes from a Sickbed for its lessons in dealing with an illness that the health care community has trouble taking seriously.

Fantasies include creating a Rube Goldberg setup to give her a smoothie, becoming a ghost (inventing Berkeley Society for Bitter Ghosts with lessons) to be able to move about to haunt others as armor against college students who “… were living not-sick lives” (17) in the apartment above hers. She tries to block out life beyond her room with a white noise app (heavy rain) or ear plugs. Brunton calls this lifestyle (with gallows humor) “open casket” (20). “A good solution to being too sick to leave your bed would be to have a bed that can go anywhere,” (34) Brunton writes. Though I was expecting a walking bed, ala Winsor McCay, Brunton imagines (more realistically?) her bed as a rolling layered cake, snail shell using pick-axes to pull herself along, and horse-drawn cart, among others.

It’s a struggle to accept advice and to be grateful that you’re alive when you’re stuck in one place, imprisoned in your inactive body. Are there positives that can be found? Even hearing about a survivalist apocalypse game out in the woods was a relief, because some survivalists are more miserable than Brunton. On four vertical pages (48-51), Brunton designs her dream house tower with room for the domestic and woodland creatures she’d enjoy (see below for delightful images of great complexity). To bring the story back to reality, Brunton actually gets a better view of the street with a loft bed. 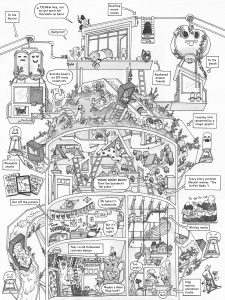 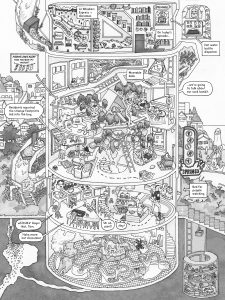 She has bouts of feeling well enough to be active and run errands outside; but she quickly learns that her active times lead to many days back on the couch … recovering. She learns to prepare for outings (for example, tabling at a Comicon) by trying to be extra restful for six days before a one-day outing. Brunton found writing a dark allegory (mystery, murder, and mayhem) called Dark Rides, a chapter—one of the longest at 43 pages—became therapeutic. She was drawn to researching for her tale’s realism; but was that possible from a couch and online search engines? She’s pictured talking to herself; pros and cons of leaving her home for in person information gathering; then planning the details of such a trip, but would she ever finish this adventure? Or does this become a short, incomplete tale, like one of Kurt Vonnegut’s stories authored by his character, Kilgore Trout? After the fact-finding mission, what would her inevitable physical crash be like and how long would it take to make such a graphic novel? We see Brunton primarily living in her thoughts. Brunton has arguments with herself about storylines, plans, and her limitations.

Brunton spends time online trying to figure out her illness, including self-diagnosis (before the official one), keeping a journal of things that help such as diet changes (e.g., cut out sugar), comfortable clothes for resting, part-time working at home (Pre-COVID), meditation, exercise, and Cognitive Behavior Therapy (CBT) “… as an effective tool to help anyone learn how to better manage stressful life situations.” There were lots of out-of-pocket expenses for services covered (or not) by insurance, such as blood tests (which “revealed nothing [76]”). She kept a rolling cart nearby with materials for her most common activities: reading, knitting, food, writing, drawing, note-taking, online class materials, etc. For a time, she was obsessed with stop motion animation … a fitting activity to match her sedentary life.

For being a story about inactivity, Notes from a Sickbed provides a fascinating, empathic tale of imagination, frustration, and coping with one’s limitations.