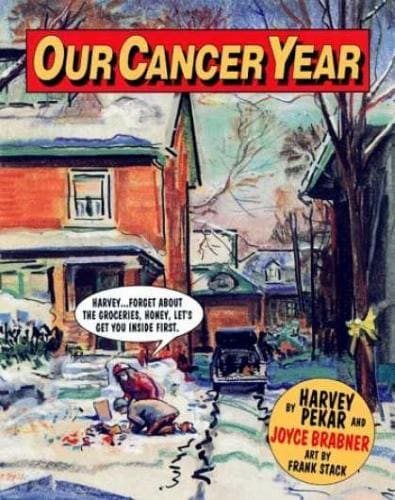 Our Cancer Year portrays the diagnosis and treatment of Harvey Pekar’s lymphoma against a backdrop of domestic upheaval and the momentous political and social events of the first gulf war. Frank Stack’s scratchy monochrome brush and pen work lend the panels an air of anxiety and disorder. A real-life file clerk in a Cleveland hospital, Pekar has been documenting the day-to-day idiosyncracsies of his life and work since 1976 in the cult comic series American Splendour. One of the first writers to think that everyday life could provide the basis for comic book stories, he hired various cartoonists (most notably Robert Crumb) to do the drawing.  On this volume his wife, also a writer, contributes so we get the story of illness seen from the points of view of both the sufferer and the carer.

Harvey has procrastinated for three years before seeking a medical opinion on the lump in his groin because of his fear of doctors. Once the diagnosis is made, well meaning friends complicate things with their advice, casting doubt on the medical treatment and feeding Harvey’s distrust. Like Cancer Vixen and Mom’s Cancer, certain themes emerge: inadequate communication and explanation; lack of time and empathy; feelings of bewilderment, fear, dislocation, questions of stigma and shame and of course the utter misery of chemotherapy.  As the drugs and radiotherapy takes their toll on his physical health, his difficult and erratic behaviour puts stress on his relationship with Joyce. This book highlights for me the differences between the US and the UK systems: in the states, for instance, it seems that second opinions are routine whereas in the UK they are generally only sort when trust has broken down. The potential expense of the treatment, the implications of the cost to the patient, are very worrying.

Although this book was written over 15 years ago, it is still feels very relevant. Treatments may have improved slightly but I am willing to bet that attitudes and communication skill have not changed very much.