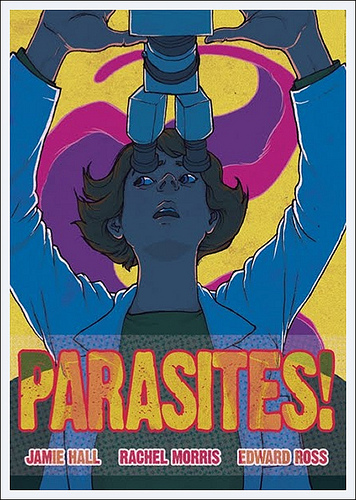 This 8-page saddle stitched comic is the result of a collaboration between Cartoonist Edward Ross and Molecular Parasitologist Jamie Hall, with cover art by Rachel E Morris. It has been printed by the Wellcome Trust and highlights the work of their Centre for Molecular Parasitology in Glasgow.

Ross’s graphic reportage gives a fascinating glimpse into why the centre’s scientists, who feature in the comic, find these single-celled creatures so fascinating. Ross and Hall worked closely together in writing the comic and tried  to avoid sensationalizing the subject or patronizing their readers. They specifically avoided suggesting any kind of malevolence or freewill in the action of the single celled creatures, but rather to highlight the remarkable ways in which these relatively simple forms of life are able to adapt and prosper, despite attempts to eradicate them.

The narrative explains why drug companies don’t tend to develop new drugs to combat tropical parasite infections: it is bad business as people in developing countires cannot generally afford new drugs that are costly to develop. The Wellcome Trust provides an opportunity for scientists to study parasites and ways to treat infection without having to justify costs to a competative pharmaceutical company.

The comic serves several functions: it is, naturally, a promotional publication for the Wellcome Trust and the University of Glasgow, but it also a clever way of engaging the public and raising awareness of the devastating effects of parasitic diseases on the people of developing nations. It is also rather informative: I know very little about tropical diseases, not having had to use the sketchy details I had to learn in medical school, and gleaned some interesting facts from this little booklet.

The comic is attractive,  printed in full colour on silk coated paper and is availiable to download as a pdf  HERE   (29.9MB) or you can get a free printed copy via Edwards BLOG