Home / Comic Reviews / Graphic Novels / Pedro and Me: Friendship, Loss, and What I Learned 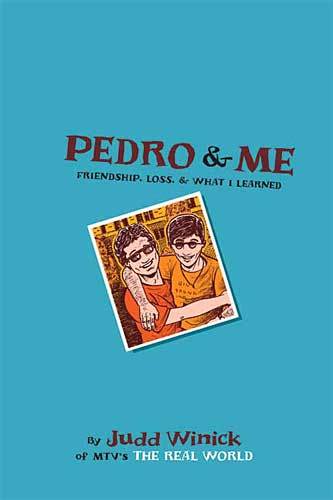 I am a hard-bitten, cynical doctor, but this one nearly had me in tears! Not sure why… the sheer tragedy maybe, the charm of the central character, the love of those around him expressed with sincerity?

Pedro is a young Cuban émigré, living in America. Attractive, gay and seeking excitement he becomes sexually active at a young age and contracts HIV. Devastated, he decides to spread the word to other vulnerable young people by public speaking. He tours the States, educating others about safe sex and how to avoid AIDS.

Judd Winick is a cartoonist. After graduating from art college he found that his anticipated career had not taken off quite as he hoped. He auditioned for, and was accepted onto MTV’s reality programme ‘The Real World’. He considers himself a liberal, but the news that he will share a house with (in fact a bedroom with) a man with AIDS forces him to confront his own attitudes and overcome his own anxieties. In the house he not only meets the man who will change his life, Pedro, but also his future wife, Pam.

Pedro’s declining health brings together those around him and his attitude and selflessness touches everyone. Even Bill Clinton (featured in the story) was moved to help his plight.

This excellent book is packed with information and would be a great debate opener on the subject of HIV. It discusses sexual practices and the disease openly without being graphically explicit. Highly recommended.