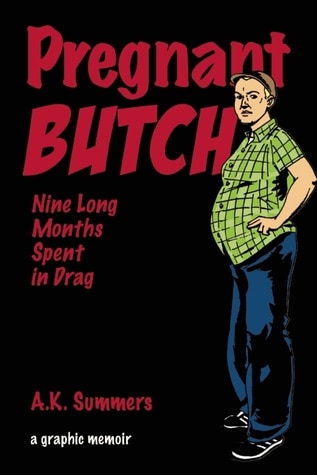 A.K Summers in Pregnant Butch provides a realistic, relatable and humorous narrative into her experience of pregnancy as a butch, lesbian woman.  The non-fictional graphic novel is the first by A.K Summers, “written in 2005 after the birth of her son” [1]. Written in first person, she challenges themes of societal norms, masculinity and gender roles whilst living in New York in the 1980s.

Teek Summers uses comic form to accentuate and visualise the journey and struggles of the common yet underexpressed phenomenon that is queer pregnancy. Teek and her girlfriend Vee experience social pressure, as a result of their age, to start a family. As Teek ponders pregnancy, she expresses concerns about losing her identity and butch pride. After deciding to proceed with the pregnancy, she explicitly describes the issues of conception and also the associated gynaecology appointments aided by a gay doctor, ‘Dr Gay’. Throughout, she explains her experience of being an outcast compared to the stereotypically feminine depiction of a pregnant woman in a heterosexual couple. There is the assumption that either she and her girlfriend Vee are adopting, or, outsiders surmise that her more feminine girlfriend is the one pregnant. She also illustrates, in a jocular yet frank manner, the non-fictional changes of both her physical and emotional states as a butch, as she progresses through pregnancy and following the birth of her child. The novel is eye-opening, honest and engrossing.  The majority of her illustrations are chaotic conveying effectively how hectic and stressful this time in her life was.

The novel has an extraordinarily honest tone, which I loved. The legitimacy of her journey and the humour she used to portray it made it highly relateable. The forthright and genuine spirit of Pregnant Butch can also be appreciated in other graphic novel works such as; Persepolis and Fun Home; both of which involve contrary perspectives but also scrutinise sexuality and gender norms. Graphic novels derive merit because you are able to see the characters and setting, enabling a deeper grasp of the story. Whilst the illustration was constructive, I found it difficult to keep up with its facticity, but perhaps this is deliberate. The book’s objective is to normalise non-mainstream pregnancies and provide an insight into butch life, which I believe Summers has carried out effectively. The book is ideal for masculine women and the educational and informative nature also makes it perfect for anyone who is pregnant or thinking of having a baby.

This graphic novel does significantly well in provoking thought about the lack of representation and reality of some pregnancies. Although a short read, she accurately and relatably depicts the perceptions of butches in society whilst discussing numerous themes using humour and well thought out illustration.  I eagerly anticipate reading some of her other  works.