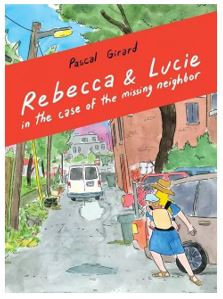 Is Rebecca & Lucie an imaginative, invented adventure of a woman named Rebecca, on maternity leave with her eight-month-old daughter, Lucie Girard, and married to Pascal Girard, a hospital social worker? Or a true story? The back cover of this tale calls it “A maternity leave mystery that centers a new mother in all her post-partum glory!” Rebecca & Lucie—written by Pascal Girard, Quebecois French-Canadian; and translated by Aleshia Jensen—is a playful (except some mystery parts) tale dedicated to “a” Rebecca.  Lucie (aka, Lulu) plays an endearing toddler. There are autobiographical aspects and a lot of humor in this delightful story. All information and imagery in this graphic work might be important, so pay attention when you read it. I highly recommend Rebecca & Lucie.

Rebecca & Lucie’s prologue has Rebecca nursing Lucie after dark. Rebecca gazes out her apartment window to see someone putting something into the back of a van and driving off. Early on we see several women with their infants talking over coffee; and sharing advice (e.g., “If you nurse him right before you go to bed, he’ll definitely sleep through the night.” (8)). Rebecca is nearing the end of her “mat leave;” see end of this review for Quebecois’ maternity leave rules.

A TV news report indicates that Eduardo Morales, a neighbor of Rebecca’s, has disappeared. He’s a caregiver for “an older couple on Waverly” (12) to help with their activities of daily living. “Missus” Simard had hip surgery after fracturing her hip from her husband (Raymond with Alzheimer’s disease) falling on her. Eduardo was their caregiver after that. They have two sons (Lionel & Raymond, Jr-accountant).

Most of the medical content occurs early on. At Rebecca’s clinic appointment, she’s asked if she’s doing her kegels (exercise for males or females to strengthen the pelvic floor muscles; especially to prevent urinary incontinence). She is. With Rebecca and Lucie in attendance, at a birth center meeting of new parents of toddlers, we see a man telling attendees his son’s delivery was a “C-section” and “to the woman doctors, ‘My son didn’t have a vaginal delivery! He needs his bacteria.’ She[, the doctor,] literally had no clue what I was even talking about.” The speaker asked for a Q-tip “… and swabbed the gut bacteria myself and rubbed it all over my son. … Nobody had read the studies. Here they are telling us about skin-to-skin contact and breastfeeding, but they’ve no idea about a healthy microbiome? A dad’s job just never ends!” (30) Though he’s providing real information, the group leader cuts him off, saying she only “wants to hear from the moms from now on.” (30) Rebecca provides her day before birthing Lucie from losing her mucus plug … napped between contractions … followed 5-1-1 rule (contractions every five minutes, lasting one minute, for one hour) to birthing center through her delivery and follow-up at hospital needing forty stitches. (31-33; truth!)

There’s a lot of physical humor/seriousness, like when Rebecca has to breastfeed Lucie while interviewing an alleged suspect during her amateur sleuthing to figure out what happened to Eduardo. Trouble, and some laughter, ensues when Rebecca tries to impersonate a healthcare worker. We see early motherhood in all its lack of accommodations (e.g., not having changing table in a restaurant bathroom leads to a diaper change in full view at tableside)!

Rebecca’s husband is a hospital social worker that does psychosocial assessments before someone is discharged. Lucie has a (febrile) seizure; Rebecca has her laid on the floor unrestrained; they time it; Rebecca watches and comforts Lucie; it lasts about 4 minutes. They take her to the hospital after the seizure ends.

Rebecca & Lucie has a water-color look with simple but lovely illustrations. Enough details are shown in foreground and background for reader’s imagination to complete the scenery. All the while the illustrations direct the readers to the more colorful center of the panels where the main action is.

Rebecca & Lucie is a wonderful tale of how Rebecca takes advantage of her last days on maternity leave to have “something to do.”