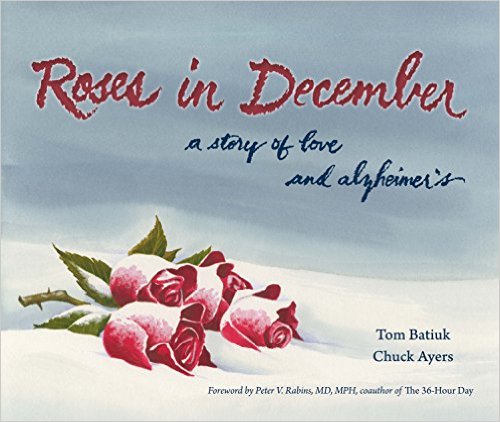 guest review by Kevin Wolf
Two books , Safe Return Home: An Inspirational Book for Caregivers of Alzheimer’s (Andrews McMeel publisher 1998) and Roses in December: a story of love and Alzheimer’s (The Kent State University Press 2015) by Tom Batiuk and Chuck Ayers are the early and complete collections, respectively, of Crankshaft comic strips about elderly characters suffering from Alzheimer’s disease from diagnosis to death. The book Lisa’s Story: the other shoe (The Kent State University Press 2007) by Tom Batiuk is a collection of Funky Winkerbean comic strips about Lisa’s diagnosis of breast cancer, her treatment, remission, and recurrence.
These stories sensitively and humorously show the effect of receiving the devastating diagnosis, how friends and family react, caregivers handling the treatments, and the role hospice plays in end-of-life care. Each book is a collection of daily and Sunday strips, developed over many years, which often have poignant punch lines. As an example one strip in Roses in December midway through the collection demonstrates this. Lucy, who is becoming more and more forgetful, tells her neighbor’s young daughter who she mistakes for her elderly sister, Lillian, in the first panel, “Actually my memories are still all there ….;” in the second panel while pointing to her head, “Locked inside these tiny little gray cells!;” and in the last panel says, “I just can’t find some of the keys anymore!”
Though all the tales are fictional, they do an excellent job of portraying how events are likely to occur. At the back of each book there are resource guides, including those related to Alzheimer’s, dementia, and breast cancer; that for hospice and palliative care; and for patients and caregivers. The listing in Lisa’s Story is more comprehensive. The Kent State University Press published books are part of their Literature and Medicine series with founding editors Carol Dunley and Martin Kohn. Roses in December includes a foreword by Peter V. Rabins, MD, MPH of Johns Hopkins School of Medicine and Public Health. The overarching theme of all the books is that in the end we all seek comfort, good friends, humor, and dignity.