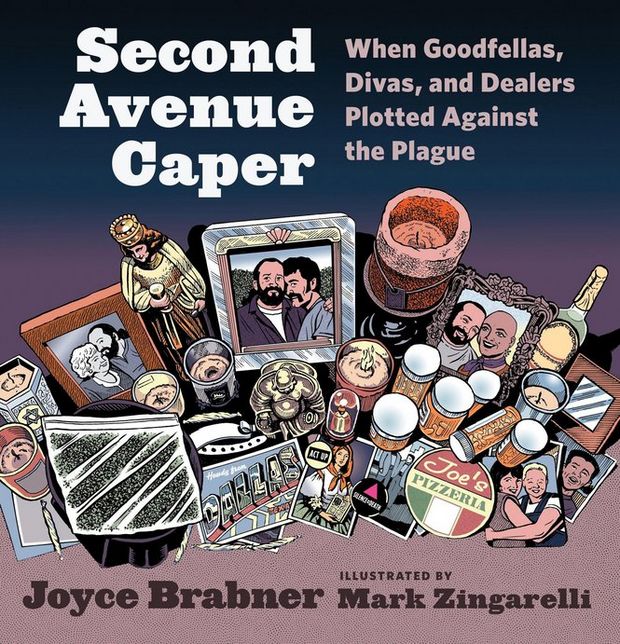 I’ve been struggling to write the review of Second Avenue Caper by Joyce Brabner and illustrated by Mark Zingarelli. Not because I wasn’t moved – sadness and happiness mixed together with drag queens and drug smugglers in a messy, trenchant read. Nor because I lack the means – I can hoot and haw all that is necessary. Instead my reticence is a result of having no other choice. In chronicling the earliest days of the AIDS epidemic, in exposing the double narrative of absurdity and hope, and seeing it shattered only to be rebuilt again, I trouble imagining I have very much to say besides, “Read this book.” Mentioning anything else is like trying to give the Coles Notes of the Bible.

But like the graphic novel says, “silence equals death”, so in vain I write: HIV/AIDS may be symbolized by red, but it has recently been captured in black and white. Brabner’s winding account and Zingarelli’s illustrations follow Raymond, a queer male nurse-turned-drug-dealer-turned-sole-champion-of-experimental-HIV-medication-in-New-York. It’s a mouthful, and the dizzyingly tale of grassroots (weed was sold to make up for the account of Ribavirin) activism is similarly as gigantic. In the small book that is hardly small in its effect, one meets a cast of characters from nervous Mexican doctors, illustrious activists, and shady gangsters. One discovers the lives of others as though they’ve always known them. And one undergoes gnawing doubt, emotions, and triumph as though they’ve experienced it themselves.

This is a result of Brabner’s own inclusion in the story. As an active participant rather than a literal limp limb, she heightens Raymond’s chronology by embodying it both physically and literally. For both her and Raymond, the past and present blur after years of internalization. The drama, suspense, and heartache is therefore relived after the fact through interpretative drawings that need not be objective for they happened subjectively. And it is in this personal narration of both the author and the story-teller that makes the graphic novel so poignant.

Yet while the illustrations lack colour, there is a world of it in the book. In between the black and white comics are millions of weaving tales known and not, tales that can be defined only in red or in the blood that was spilled, in the lives that were lost, and in the people, the names, the lovers, the family members who did not make it to the end, who move beyond the panels of the page into the whispered Universe carrying all along like an echoing hum.

Barbner’s and Zingarelli’s form of documentary realism, thus, does not finish when the story does. Nor is Second Avenue Caper an account of progress, a celebration of the medical growing pangs that birthed HIV into a chronic condition. It is a warning of what was – the starved type of desperation that makes illegality as the only possible recourse – and what can be again, if not already is. The lackadaisical worldwide response to Ebola serves as a chilling precursor to what happens when targeted groups are vulnerable and ignored.

Yet, the graphic novel is not just a story of devastation. All beautiful things are touched by sadness, and Raymond’s narrative is a hymn of the tied dance between the two. Through a medley of activism and drug-running, he manages to foster community, a bit of hope, and happiness in times of overwhelming uncertainty.

This blend of both destruction and creation, I think, is what the book is about. So if I were to give my Coles Notes – the Bible is admittedly harder – I’d be knowingly reductionist and say: Second Avenue Caper is a story about an ordinary life that is hardly ordinary, about a happily ever after that is hardly happy, and an ending that hardly ends at all.