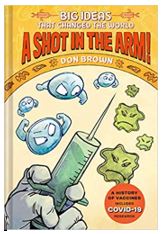 A Shot in the Arm by Don Brown is a color non-fiction graphic work of vaccine development narrated by the historical figure, Mary Wortley Montagu (1689-1762). This work permits Ms. Montagu to be of her time during a deadly Smallpox epidemic in Europe, as well as, carrying her through our current COVID-19 times. She’s the key founder of vaccine distribution. Smallpox, being eradicated from Earth since 1977, is also one of the great success stories of vaccines. “Along with clean water and sanitation, vaccines rank as one of the greatest contributions to public health.” (114) The history of vaccines is filled with countless saved lives from illness, disfigurement, and/or death. I recommend A Shot in the Arm as an educational tool, especially for middle schoolers and older. This work is part of Amulet Books’ (Abrams) Don Brown’s series: Big Ideas That Changed the World.

The history of Smallpox (pages 3-21) goes back 3000 years when pox scars were found on Pharoah Ramses V mummy; Smallpox traveled to European, Asian and African continents by the 7th century; brought to the Americas in 1500s; and used as a biological weapon by the British against Indigenous peoples, who had no immunity, of what became North America. Smallpox is caused by a virus with aerosolized spread via air or clothing between people. In hundreds of million people, this pox causes death in 30% of those infected, disfiguring scarring blisters, and, perhaps, blindness. In China around 1000 CE some (unknown) people found mild-case survivors were immune; and harvesting of pus or dried scabs could be introduced nasally to create mild cases. This was the first vaccine via insufflation (through the nose). Turkish people used variolation inoculation (Smallpox pus on solid needle poked under skin). “Some people in the Ottoman Empire [~1300-1922] known as ‘fatalists’ rejected variolation because they believed that stopping disease interfered with God’s plans.” (21) Lady Montagu’s younger brother, William, died from Smallpox, and two years later she got it. She survived, but was disfigured by blisters. She learned of variolation inoculation after moving to the Ottoman Empire where she treated her own children. Upon her return to London, Lady Montagu’s method was introduced and circulated to fight off a Smallpox epidemic. Prisoners and orphans were experimented on before Princess Caroline of Wales allowed it for the rest of her subjects. Persons were often quarantined while their mild case ran its course. Cotton Mather, in Boston Commonwealth of Massachusetts North America, “Enquiring of my Negro man, Onesimus [Mather’s slave, late 1600s into 1700s], who is pretty intelligent fellow, whether he had ever had the smallpox.” (40) Onesimus explained he was inoculated, leaving small scar on his arm, in Africa. Mather spread word on inoculation; but Dr. William Douglass and other doctors and Boston leaders demanded they stop and 850 died (~1/6); of ~240 already inoculated only 6 died (~1/40). Douglass was inoculated a few years later when smallpox returned. Typically, doctors & scholars didn’t believe Cowpox was a cure; while some citizenry found variolation of Cowpox preventing Smallpox. Milk maids had been found to not get Smallpox. A doctor’s apprentice, Edward Jenner, who later became a doctor developed the Smallpox preventive from scratching people’s arms with Cowpox. Once infected with the tamer Cowpox (with little or no scarring), one doesn’t get the deadlier Smallpox. Jenner named the procedure vaccination (vaccinus means “of or relating to cows”).

After some governments made vaccination mandatory, some people protested getting the shot. Anti-vaccination leagues began (e.g., in 1879, Anti-Vaccination Society in America started). U.S. Supreme Court held in (Henning) Jacobson v Massachusetts (1904/1905) that Cambridge, Massachusetts could make vaccinations mandatory because it “has the right to protect itself against an epidemic of disease which threatens the safety of its members.”

Dr. Robert Koch (1843-1910) demonstrated microscopic bacteria can cause disease (e.g., anthrax, tuberculosis, cholera). Brown, the author, gives Koch’s four bacterial-caused-disease parameters (79). Vaccines for other diseases were found. A Shot in the Arm shows Louis (1822-1895) & Marie (1826-1910) Pasteur found cure for Chicken cholera accidentally while making other curative attempts. Louis Pasteur in 1881 showed he’d developed an anthrax vaccination. And later found rabies cure; and rabies’ cause wasn’t visible with microscopes of those days because it was due to a much smaller virus.

When developing vaccines early on as opposed to current days, the number of animals or humans tested was small before trying the vaccine more widely in humans. And early successes reinforced the testing to widely administer vaccines. Not until the early 1900s when some poorly manufactured “vaccines” failed and killed some children were laws passed and regulations implemented in the United States to try to ensure quality and efficacy of drugs in general and vaccines in particular. These laws included the Biologics Control Act (1902) and Pure Food and Drug Act (1906). A Shot in the Arm doesn’t mention that the primary reason for the latter law (along with the Federal Meat Inspection Act, 1906) was due to President Teddy Roosevelt reading Upton Sinclair’s novel The Jungle (1906) about, among other things, the lack of sanitation in the slaughterhouse industry.

Over time and from research, testing, and production, many vaccines for other diseases were found, including tetanus, diphtheria, plague, MMR (mumps, measles, rubella), and polio (Salk and Sabin vaccines). The process still didn’t work perfectly, as when flawed manufacturing led to bad batches of Salk polio vaccines being distributed resulting in 200 crippled people and ten dying. A Shot in the Arm provides an excellent explanation of how Jonas Salk’s dead versus Dr Albert Sabin’s live-but-weakened polio vaccines worked (103); with the latter being slightly riskier … not to the receiver but to unvaccinated persons. The U.S.’s Centers for Disease Control and Prevention only currently allows the Salk vaccine version, which has no risk to unvaccinated persons. Vaccines and the body’s immunity, greatly simplified, operations are anthropomorphized (cover shows an image) on pages 104-109. Historically, the only disease that’s been eradicated from our planet is Smallpox with the last known naturally occurring case in 1977. Now we’re living through the COVID-19 pandemic and successful vaccines (116-121) were in development stage when A Shot in the Arm went to press. For more history, you can look at earlier graphic medicine reviews of graphic works on plagues, or COVID-19.

A Shot in the Arm taught me the definitions of some new-to-me words, like insufflation (through the nose), variolation (scratched dried weaker Smallpox (variola minor) into the arm) with a solid needle, and attenuated (weakened) form of disease to immunize against the disease; and the root meaning of vaccination (vaccinus means “of or relating to cows”).

The simplified illustrations in A Shot in the Arm are pleasing and allow the seriousness of the writing to be emphasized. At the back of A Shot in the Arm, the author provides a selective Timeline (e.g., Smallpox from 300 BCE forward), a brief biography of Mary Wortley Montagu (1689-1762; aka Mary Pierrepont), endnotes, selective bibliography, an Author’s Note, and an Index.

Fever Year by Don Brown about the 1918-19 flu pandemic was also reviewed at www.graphicmedicine.org.