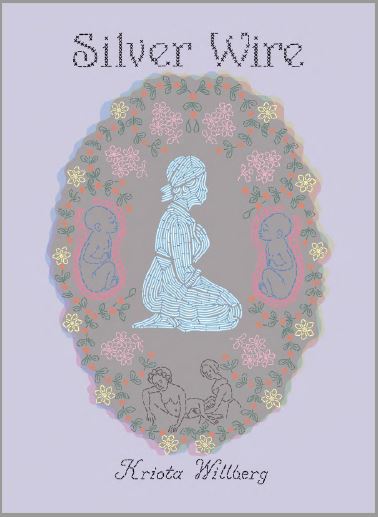 Silver Wire by Kriota Willberg provides a fascinating introduction to, history about, and descriptions of ligatures and sutures, and more. According to medical-dictionary.thefreedictionary.com ligature is “a thread or wire used in surgery to tie off blood vessels to prevent bleeding, or treat abnormalities in other parts of the body by constricting the tissues” and suture is stitch(es) to secure “edges of a surgical or traumatic wound.” The material used can be dissolvable (usually for internal stitching) or needing to be manually removed (external stitching usually). From Willberg’s research, “For millennia surgeons have been closing up the body with threads, wires, knots, buttons, pins, and beads [page 1].” Willberg finds a lot of overlap between medical stitching and domestic sewing, often shown with detailed images (see example below). Willberg does needlework; and explains that “For over a thousand years, the history of Western surgery mentions very few women, and yet there is evidence of women practicing surgery throughout that history. … I wonder … how women have contributed, unacknowledged, to the evolution of medicine? [2]” Willberg provides detailed endnotes and sources (“Citations and Wry Observations”) over nine pages; including wonderful embroidered imagery. I highly recommend Silver Wire. 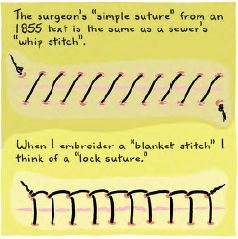 From Page 1 of Silver Wire.

We watch the author’s hands-on lessons—taught by Mollie, a palliative care “doctor friend” —suturing on a grapefruit and banana. The “interrupted stitch” almost as “Guy de Chauliac described it in 1363. Just like watching an expert stitcher working to hide their stitches when repairing clothes, we see how this is also done to avoid “dead space in the wound [4]” and reduce visible scarring. Willberg has the historical figures (e.g., Galen from 2nd century, de Chauliac, Joseph Lister, and others) close by giving advice during her lessons. Willberg relates some types of stitching to more commonly known visuals, such as the stitches on a baseball. Some older techniques, that were out of practice for a time, are back in vogue, while others have disappeared. Willberg discusses the materials and tools used. For example, amputation moved from ligatures to stop bleeding, to cauterizing and back to better ligatures over centuries. Methods and materials continue to be refined. The thread used has been and sometimes still is: silk, catgut, and silver wire.

Willberg adds some nature during her suturing lesson on a park bench in Central Park (New York City) when ants and a chipmunk join the lessons. Willberg doesn’t avoid mentioning wretched lessons from the past, such as hundreds of live dissections on animals, using enslaved persons in experiments, grave robbing and murder to acquire bodies for anatomy lessons, and so on. “Our pain is relieved, and our lives are saved by unethically gained knowledge. [11]” Of course, in Central Park they walk by the statue of J. Marion Sims (1813-1883) “father of gynecology” who experimented on (unanesthetized, uninformed, and unwilling) enslaved women. Note: In 2018, New York City’s Design Commission voted unanimously to have the statue removed and it was. Willberg details Sims’ treatments for vesico-vaginal fistulas (leakage of feces and urine into the vagina), including silver wire sutures and perforated bird shot. Many current treatments have benefited from such unethical-by-today’s-standards-though-should-have-been-unethical-for-all-times. Willberg gives some names to those so treated which helped create the current state of medicine practices; as Willberg states, “One [enslaved] woman, Anarcha, received over thirty operations [15];” and spends several pages explaining how these unethical practices indirectly impacted herself. Anarcha’s silhouette is represented as the central figure on the cover of Silver Wire. Silver Wire received a 2019 Ignatz Award nomination for outstanding mini-comic.