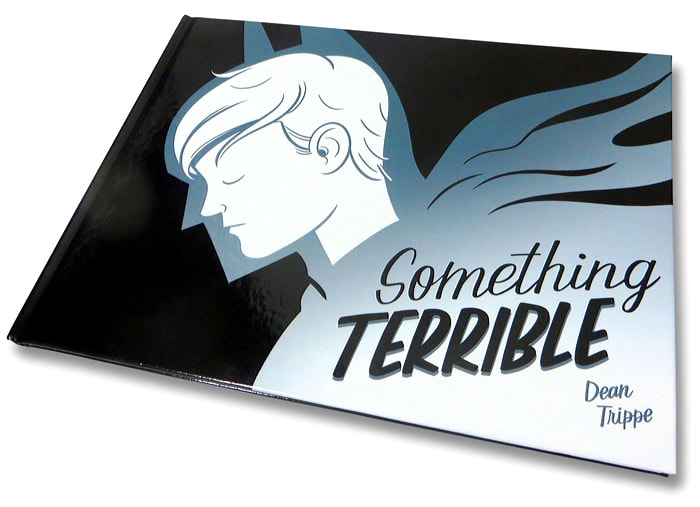 Everything about this graphic memoir is brief, but it packs a wallop. It’s only fourteen pages plus a four page epilogue, a foreword by Kate Beaton (Hark, a Vagrant), and afterword and closing thoughts by the author. Something Terrible is about surviving childhood sexual abuse and its continued torment into adulthood. The book is stark, in black and white with a gray wash and one color page and a just preceding color panel. The book is often wordless, allowing the images to carry the weight. This was a very courageous memoir for the author to present. I recommend this memoir.

The memoir opens by zooming in on the author as a child on his doorstep, hugging his knees. See a flashback of sexual assault (mostly left to the reader) with the words “If you tell anyone … … I’ll kill your family,” over two panels. A court appearance and dolls, presumably in counseling, for the child to explain what happened. Pull back to the child-author going on with his life and finding comics, in particular Batman, for solace and strength.

The author presents his adulthood with numerous fears; including killing himself before he would ever hurt his son in the way he had been hurt and refusing to bathe his child. The author found safety with Batman showing that superheroes, the only color page, are real, saying “You’ll be safe here.” And there is one medical reference that in part says, “the vast majority of sexually abused children do not grow up to be adult offenders.” The author writes this graphic memoir to help others in the same way that superhero comics had helped him.