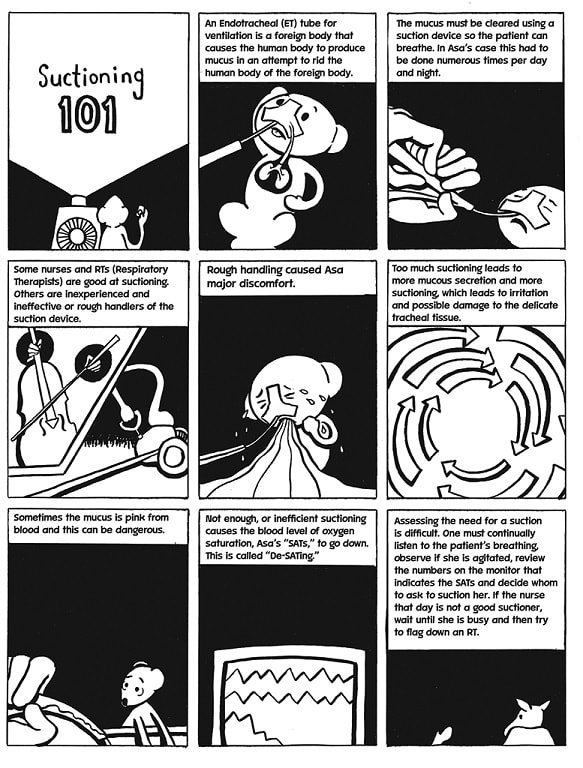 Jenny Jaeckel’s Spot 12 is a gripping, emotional memoir of a family’s five-month stay in the Neonatal Intensive Care Unit (NICU) after a routine prenatal exam – basically, every soon-to-be mother’s worst nightmare. Illustrated in an anthropomorphic style a la Maus (though with an appropriately softened approach), we are thrust immediately into Jenny’s physical and psychological battle of life with a daughter, Asa, born with tracheosophageal fistula (TEF). If I were forced to stop a review short, I would end here by thanking Jenny for her openness and raw honesty; I don’t think I would have the strength of heart to share this story, much less illustrate it, and that strength alone deserves applause.

Going into Spot 12, I wasn’t entirely sure what I was getting in to – for one, I am not a parent and have never experienced the pure terror that you see illustrated on Jenny or her husband Cito’s faces. The soft, anthropomorphic illustrations were jarring at first, almost at odds with the serious nature of the story, but just 12 pages in, I was convinced that this was the only way to tell this particular story. The animal illustrations made it somehow both easier to handle reading such about such a heart-wrenching experience, but also transcendently real, as if seeing fear, agony, and confusion in their primal forms. On length alone, it should have been possible to finish this memoir in mere hours, but because I kept finding myself crying, it took sporadic readings across weeks to get to the end.

TEF, Jenny explains, is a rare birth defect, or anomaly, that occurs in roughly 1:4000 live births – and is typically a further complication to esophageal atresia, a malformation of the esophagus. In layman’s terms, this meant that Asa’s esophagus was like a split railroad track that, instead of leading directly to her stomach, ended and reconnected midway through her trachea instead. This made both breathing and eating dangerous (imagine having a piece of food go down the wrong pipe every time you swallowed) and led to more surgeries than I could keep track of throughout the memoir. With every new complication in little Asa’s life, the willingness of parents to do anything and everything for their child shines through. Above all the frustration, anxiety, and entire hosts of fear, belief in one day getting to take their daughter home… that hope is ultimately what this story is about.

I could go on-and-on about the emotional and mental health aspects of this memoir, but nothing I could say would be a substitute for reading and experiencing that for yourself. That said, there are two other points that stick out to me that have had my head buzzing from early on. First, in several places there are comments made about the safety of vaccination. Even in a powerful, emotional memoir such as this, it is irresponsible to suggest to a reader that vaccines may have any link to autism whatsoever – there is no, medically sound research to suggest that.

Second, as a US citizen, I am still in amazement at the level of care provided to Jenny’s family – not only in the hospital, but having a midwife and home-nurses available as part of a national healthcare system. Reading from the US, it was impossible to not spend considerable time thinking about what would happen to my family if a similar situation arose without such a powerful safety net – odds are, it would have resulted in bankruptcy at best, and the unthinkable at worst. As the US continues struggling to even hold onto the band-aid fix in the Affordable Care Act, this insight into a healthcare system that puts the patient above all else is equal parts hopeful and depressing.

All-in-all, Spot 12 is an emotionally honest, heart-wrenching memoir of determination and hope in the face of helplessness, and an important addition to the graphic medicine canon.