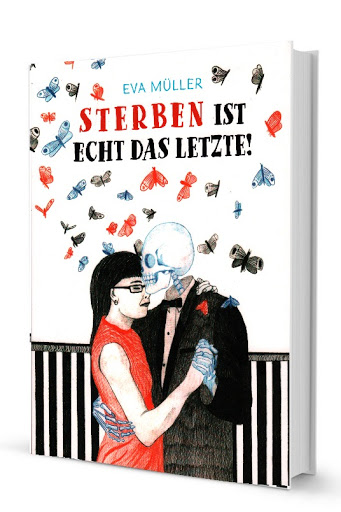 The Fumetto Comic Festival in Lucerne, Switzerland, hosts a series of satellite exhibitions every year as a significant component of their programming, turning the city into a fascinating forum for emerging artists to display work publicly, in venues as diverse as shops selling eyeglasses to run-down bars to disused swimming pools. In 2018 the works of two comic artists framed the doors to a small rectory in the city centre: on the left, my own graphic narrative looking at mental conflict as it manifests in utero, and on the right the original pages from Eva Müller’s graphic novel Sterben ist echt das Letzte, a series of stories about the artist’s own confrontations with death—that is, as it manifests in her mind.

Sterben ist echt das Letzte is made up of autobiographical episodes which begin with the emergence of Eva’s insomnia and fear of her own mortality at the age of five or six. Staring at television reports about starving children in third-world countries, Eva begins wondering if she is exempt from these experiences, or if similar afflictions will put a count to her own days on earth. Ironically, attempts by her parents to comfort her only compound her anxiety, from bedtime readings of the popular German children’s book Struwwelpeter (Shock-headed Peter) with its tales of misbehaving children dying horrible deaths, to lullabies such as Brahms’ Guten Abend, Gute Nacht (“Good Evening, Good Night”) with its lyrics “slip under the covers and … God willing, you will wake again.” Finally, in their search for the cause of Eva’s sleeplessness, her parents bring her to a doctor, resulting only in the ‘professional’ diagnosis that “the child thinks too much!”

Left to her own devices, Eva indulges in her feelings of Angstlust (a German term in psychology defining a kind of sensual pleasure derived from the battle against or prevailing over fearful or anxiety-inducing situations), and Death seems to hold little sway over her decisions as a young adult, set in motion by an excess of drugs, punk rock, street life and squatting. Death reasserts its presence further onward though and with a vengeance, quasi-metastasising in her body due to poor hygiene as four dead teeth, forcing her to reassess whether her existential choices haven’t perhaps also been perversely influenced by her issues with mortality through the misuse of her own living body.

Winner of the Independent Comic Awards prize as best newcomer artist at the 2018 Erlangen Comic-Salon, Müller told me she based her drawings for Sterben ist echt das Letzte chiefly on photographs from her past, which situates her intriguingly in an active real-life opposition to death in reanimating her own history through drawing. At a time when the death-positive movement and advocacy for embracing human mortality is gaining momentum globally (with the ubiquity of events such as Death Cafés etc.), this work takes an important look at how ever-present impermanence is, whether it be in childhood, relationships, or our very own bodies. And though few find solace when contemplating topics related to aging and dying, Müller reveals in Sterben ist echt das Letzte that she has managed to establish an uneasy but tranquil rapport with Death, who (aptly) hovers over her shoulder as she sits at her drawing desk at the close of the book.