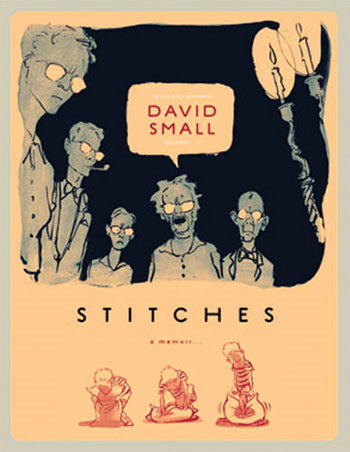 How would you feel if you inadvertently caused your son’s cancer, then ignored the lump for a couple of years, resulting in an operation that left him mute? It isn’t really apparent what David Small’s father felt, because his family are not big on communication. Edward Small chose not to tell David that he had cancer at first, then, after a couple of years, took him out for dinner and gave it to him bluntly, before resuming the usual dysfunctional truculence.

Davids father was a radiologist, and in those days X rays were heralded as a treatment for all sorts of maladies- in David’s case asthma and sinusitis, the xray sessionsexposure probably resulting in iatrogenic thyroid cancer. In fact, medicalisation, medical hubris and misplaced faith in new treatments and diagnoses are prominent themes of the book.  When David rebels against his frankly awful parents, for instance, he is sent (fortunately as it happens) to a psychiatrist, as the problem is obviously mental!

David’s parents don’t love him, and don’t love each other. He grows up in a household full of simmering, silent resentment and anger. Everyone is unhappy. Elizabeth Small, David’s mother, is a closet lesbian, as our protagonist discovers when he comes home unexpectedly one day. When David develops a lump in his neck it is noticed first by his mothers lover, and, when an opinion is sought, the lump is wrongly diagnosed as a sebacious cyst. Delay ensues as his parents put his treatment on the back burner while distracting themselves with abundant retail therapy. David’s routine operation results in a cancer diagnosis and the removal of a vocal chord. His mother gives up on him as already dead. David finds salvation through the help of a kindly psychiatrist- the only person who tells him the truth- and through art.

It is the art that really makes this book. The story is grim and depressing. The illustration is amazing- all loose grey and white brush line and wash, like sumi-e (maybe it is indeed drawn with japanese ink). There are long stretches of pantomime (narrative told in pictures only) with minimal dialogue.

I really, really like this book. There is no false cheer, just the tragedy of lives lived under false pretences. No wonder he waited until his parents were dead before publishing it.