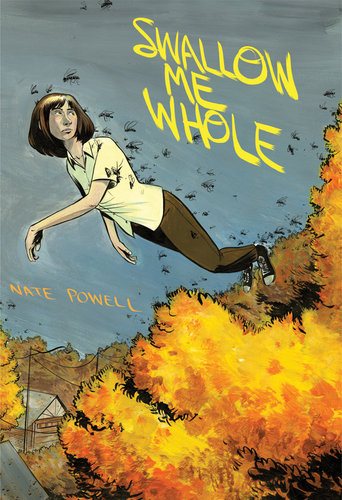 What would you do if you ever began hearing voices in your head? Would you try to eradicate them with antipsychotic drugs? Or would you accept them as an intrinsic part of your life, scarcely different from your own thoughts? These are some of the questions raised by Swallow Me Whole, a beautiful and complex graphic novel that challenges many of our assumptions about reality, perception, and the mentally ill. With this wonderful work, Nate Powell, the author of Please Release and Tiny Giants, has created a comic that is by turns illuminating and elusive, haunting and humorous, familiar and fantastical. Swallow Me Whole is, on one level, a fictional tale about schizophrenia and adolescence. However, it is also about flying pills, talking frogs, the failure of medicine, and the dire consequences of that failure. In other words, it is that rare masterwork that helps us see the world with new eyes while simultaneously forcing us to question everything we have seen.

The story follows two teenagers in a family with a history of mental illness. Perry receives constant instructions from a tiny “wizard” who sends him on pointless escapades. Meanwhile his stepsister Ruthie collects mason jars of insects, and when she isn’t obsessively rearranging them on her bedroom floor, she listens to the nocturnal Georgia wildlife calling to her from beyond the woods. While Perry believes his visions are false, Ruthie is not so sure, and over several months we follow her hallucinatory descent into full-blown schizophrenia. These psychological tensions play out against a broader backdrop of high school angst, first kisses, family turmoil, and adolescent boredom.

Powell’s surrealist style reinforces the moody overtones of the narrative. Mixing the swirling imagery of Craig Thompson with the macabre cross-hatching of Edward Gorey, Powell conjures a magical realist world that feels half a dream and half reality. This is a place where trees curl out their branches to rasp at Ruthie and Perry, an unsteady suburbia where mysterious singing floats across multiple pages like the chirruping of cicadas. With its inky blacks and paranoid atmosphere, many of the book’s sequences unfold via the cracked logic of a dream.

The artwork foregrounds major questions about mental illness and its public perception. Powell, who worked with adults with developmental disabilities for over a decade, invites us into the world of schizophrenia in ways that perhaps no other comic has before. The myriad hallucinations of Perry, Ruth, and other family members constantly bleed into reality, giving us access into their inner perspectives. For example, there is a scene when a swarm of insects chase a screaming Ruthie through the hallways of her school. The next panel shows a trail of befuddled students in a pristine, bug-free hallway. And yet Ruthie isn’t imagining everything, as evinced by the very real mayflies piling up outside her window. Unlike many other books about the mentally ill, Swallow Me Whole refuses to identify “sane” and “insane” perspectives and instead allows readers to decide for themselves what is “real.”

For this reason, Swallow Me Whole is an especially useful text in graphic medicine. It describes the interior world of schizophrenics as well as the exterior world of their caretakers, making it a useful comic for patients, family members, and medical practitioners alike. Moreover, Swallow Me Whole shines a spotlight on institutions like public education and medicine that are often unequipped to handle cases of mental illness. From misdiagnosis to questionable treatments, this book shows how the mentally ill often have to deal with systemic problems in medicine in addition to their own psychological ones.

Since its publication in 2008, Nate Powell and Swallow Me Whole have accumulated some of the highest honors in the comics world, including an Eisner Award for Best Graphic Novel, Ignatz Awards for Outstanding Artist and Outstanding Debut, and a finalist nomination from the Los Angeles Times Book Prize. This book deserves a featured place in graphic medicine as well. However, readers should know going in that Swallow Me Whole does not provide easy answers to the problem of schizophrenia; if anything, it only produces more questions. Those looking for information on early symptoms, diagnosis checklists, or treatment options should look elsewhere: Swallow Me Whole is not that kind of book. Gorgeous, complex, and cryptic, it refuses to distill the complexities of mental illness into a list of bullet points. Rather, it opens up a space to reconsider many of the assumptions we make about mental disorders, modern medicine, and the help we currently offer. And perhaps, more than anything else, that is what we really need right now.

Read a review on ComicMix here.