Home / Comic Reviews / Graphic Novels / Tangles: A Story of Alzheimer’s, My Mother, and Me 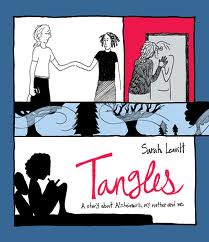 Dad: I don’t know. I guess sometimes it turns out that everything you thought about how the future would be just isn’t true.” – Tangles, page 46

Tangles is a poignant and clever name for Sarah Leavitt’s graphic memoir about her mother’s Alzheimer’s disease. First, there is the way Leavitt’s partner describes the mind of Sarah’s ailing mother: “Like the garden this summer… tangled, but with spots of brightness.” (114). Then, there is the fact that both Sarah and her mother have curly hair; as her mom begins to worsen, Sarah starts to save and collect the tangled clumps of her mother’s hair that come out when Sarah combs it. Sarah and Midge’s mother/daughter relationship gets tangled in all sorts of uncomfortable ways, as Sarah must learn to bathe and dress and feed her mom. There are of course, the tangles of Alzheimer’s itself – the neurodegenerative disease is caused by the accumulation of proteins (called neurofibrillary tangles) in the brain. But mostly, I think the tangle at the heart of Tangles is a narrative one. Before Midge Leavitt’s illness, her life as a small-town, nature-loving schoolteacher seemed to extend forward in a straight, predictable line. With Alzheimer’s, the Leavitt family story veers off in an unfamiliar direction, into a tangle of changing relationships, new responsibilities, and personal loss. The feeling that this wasn’t the way things were supposed to unfold is a knot is one that most illness stories struggle to untie: Tangles grapples with this simply, but powerfully.

Tangles consists of three parts broken up into mini-vignettes; things unfold chronologically, for the most part. Part One begins as a sort of extended flashback into Sarah’s childhood, where Midge is a passionate teacher, a lover of the outdoors, and a feisty, principled woman. We see Midge as the rock of the Leavitt family; she is the one her daughters turn to when they need support, despite the fact that their needs could not be more different. She is an intellectual partner and best friend to her husband. And she is a kind of gravitational pull that keeps her two sisters close. It is this rich portrait of Midge at the beginning of the memoir that makes the whole thing so effective; as Midge starts change in first subtle and then deeply saddening ways, we feel that we know Midge well enough to see that by the beginning of Part Two, she is slowly disappearing. 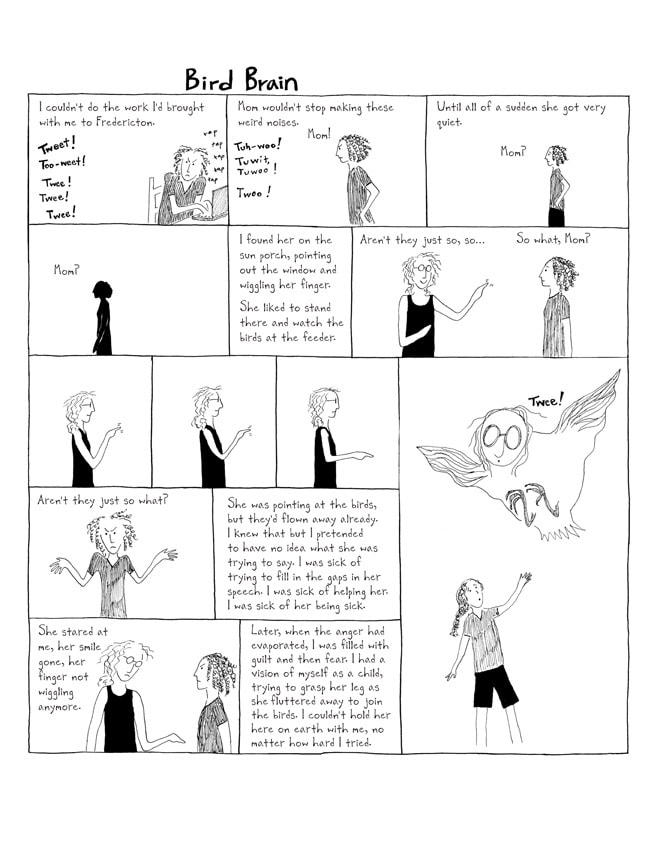 As her Alzheimer’s progresses through Parts Two and Three, one of the ways we come to recognize “new mom” (as Sarah later calls her), is her signature hand-clasp: elbows bent, two hands clasped in front of her chest, almost as if she is praying. Sarah mentions early on in Tangles that Midge’s hands were one of her favorite parts about her mother: “They weren’t pretty hands,” she writes. “They were strong hands. Mom hands.” (25). But when Sarah draws “new Mom’s” signature hand-clasp, there are no hands to be found: Midge’s arms just seem to bleed into one another at the ends, forming a sort of “W” between her bent elbows. It makes sense, in a way – the sicker Midge gets, the less of a mom she becomes. Sarah learns to clean and feed and groom her, and their roles as mother and daughter become knotted into an upside-down mess. “New Mom” is missing “mom hands” because she feels less and less like Sarah’s mother.

As Tangles progresses, moments like this happen more and more often. The early childhood/flashback vignettes are fairly linear: they have a beginning and an end, and they are illustrated accordingly, with small panels that are all the same size, filled with lots of text and, for the most part, illustrations that mirror that text. But as the Leavitt family’s story gets more and more tangled, the words and the graphics start to knot together in more creative (and more beautiful) ways. By the end of the story, the two intertwine powerfully: the panel that shows the Leavitt family driving away from the nursing home after Midge’s death consists of simple text (“We drove away from there… back to the house where my mom did not live anymore.”) and a simple sketch (the outline of a car, filled in with small teardrops). But the combination of the two is anything but simple; despite the thin lines and bare prose, the pane seems up to the task of communicating Sarah and her family’s deep and devastating loss.

In fact, some of the most powerful moments in Tangles lie completely outside the linear structures of both story and panel. They exist between chapters and vignettes as full-page pauses – sometimes with an excerpt of one of Midge’s handwritten notes, or with small one-liners from Midge and tiny accompanying illustrations that take up one small corner of an otherwise-blank page. These pages are the “live footage” of Sarah’s documentary about her mother’s illness – they offer a small but incredibly real peek into living with Midge and living with Alzheimer’s, and you can feel that these have been recorded by Sarah in the moment they were happening. These tiny quotes from Midge so perfectly capture the feeling of caregiving for someone with Alzheimer’s or dementia, in that they make you smile at the same time as they make you feel a kind of aching sadness. When Midge says things like “Oh broccoli, who are simple,” you kind of have to laugh; otherwise, you might cry (105).

Tangles is an honest and deeply personal account of losing a parent to Alzheimer’s, and all of the role-reversals, personality changes, and protracted loss that goes with that. Its power is in its simplicity; Sarah Leavitt is able to dive deep into the tangled plot-twist that Alzheimer’s wrought up on her mother’s (and her) story, and find the thread on the other side.