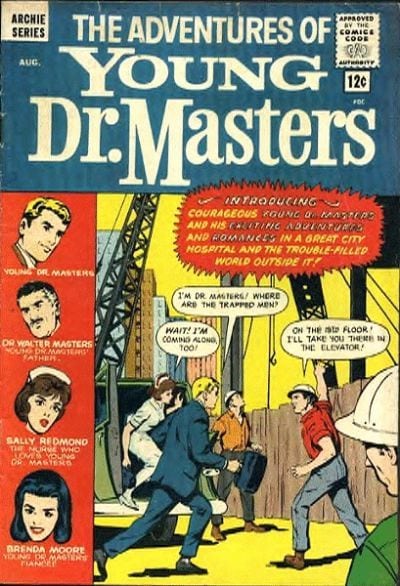 Proudly bearing the comics code stamp of approval, this comic tells of the exciting exploits of the eponymous blond haired doctor, who is first seen risking his life by going into an armed shootout to treat the gunmans wounds. He impresses the cops by  capturing him. His heroic credentials determined, an argument follows between young and old doctor masters which illustrates the rift between traditional family medicine with its emphasis on clinical judgement, and personal relationships and the new, impersonal scientific medicine, represented by Young Dr Masters.

Later our hero courageously climbs the girders of a building in construction to rescue an injured worker, clinging to a girder 19 stories up. Wearing a suit and brogues, Dr Masters balances along the metalwork, uses a handy acetylene welding torch to cut a girder, catches the wounded man as he starts to fall and finally brings him to earth clutching him under one arm whilst hanging from a rope in the other hand. On arrival back at the hospital he lights up a cigarette and alternates his attention between Sally Redmond “the nurse who loves Young Dr Masters” and Brenda Moore “Young Dr Masters fiancée” and still has time to spare for Dr Walter Masters “young Dr Masters father” who is in hospital, sick.

It is easy to dismiss comic such as this as worthless romantic cheese. It was not aimed at an adult audience, as evidenced by the “teen career guide” which encouraged “young girls” to consider nursing as a rewarding career, and the advert promising toys and bikes as a reward to children for selling “Cloverine Salve” (an advert later parodied by Jason green in his Binky Brown Sampler (1995) The unsophisticated storyline and crude stereotypes of such a comic could nowadays be deconstructed from numerous theoretical viewpoints, nevertheless, it does raise some interesting points- the conflict, for instance,  between the “old style” humanist style of family medicine, as practiced by Dr Masters senior, and the new “scientific”, laboratory based medicine. In one passage Young Dr Masters, has “finally succeeded in isolating a hitherto unidentified virus from cultures of local milk and drinking water” which is antibiotic resistant (!) he feels that if he only had time to work outs its anti-toxin (instead of working at his fathers practice and settling down with the winsome Brenda Moore, he could “accomplish more in six months than [his] dad has done in 35 years”.