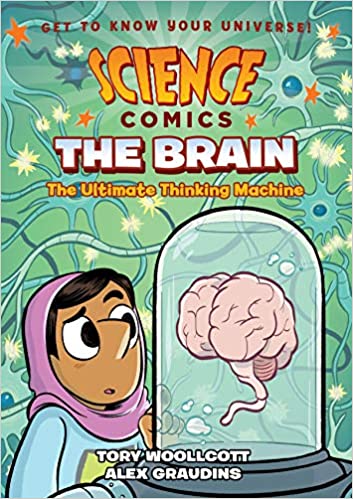 The Brain: The Ultimate Thinking Machine by writer Tory Woollcott and illustrated by Alex Graudins is a compendium of information about the brain and nervous system. This information is reported by a scientist embedded in the story of two sisters engaged in a project to earn an achievement patch. The artwork is quite good.  The characters making up the storyline are comic-book type characters, except for one of the villains, Dr. Cerebrum who looks like a brain inside a bow-tied glass-jar headed body. The illustrations of the brain, neurons, cells and nerves are particularly impressive color-coded renditions of the organs with clear labels.  The discussion is quite technical. The scientist is one of a pair of villains who have kidnapped one sister to harvest her brain for research.  The girl postpones her fate by asking questions about the brain and nervous system.  The story is contrived, but it does lighten the overwhelming amount of scientific information a bit.

The book reviews historical thoughts about the brain in ancient civilizations. The evolution of brain cells as we now understand it is traced; as well as different functions the brain performs. Types of brain cells are explained, emphasizing neurons and how they work. Neurons are a specialized subset of cells.

An amazing declaration in the middle of the book is made – that “The brain is the most complicated thing in the known universe.  There are more connections in your brain than there are stars in the Milky Way.” (page 36)

Different regions of the brain are reviewed, their appearance described, and their different functions discussed, including memory and how to improve memory. The discussion about how memory works is very good.  The learning process as well as different types of intelligence is well laid out and easy to understand. Brain-related diseases, such as tumors and degeneration associated ones (Alzheimer’s, Parkinson’s) and concussions and other traumatic brain injuries are not addressed.

The story of the sisters reaches a satisfying conclusion. I recommend this book as an introduction to the brain, neurons and the functions of the nervous system.

The Brain is part of the Science Comics Series by First Second (:01) for middle school students. A middle schooler and others who are interested in medical topics would enjoy this book.

Faye Albert is a retired consulting actuary living in Florida.