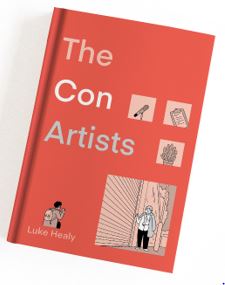 Luke Healy plays many roles in The Con Artists. He is the creator (writer/artist), he appears-perhaps as himself—in the Prologue, Intermission, and Epilogue (kind of like Mister Rogers appearance before he put his sweater on and tied his shoes to enter the Land of Make-Believe—and with a disguise change (mustache, different glasses and shirt) becomes the main character, Frank, in this fictional graphic novel. One con artist, Giorgio, becomes clear relatively quickly, but how much of his actions are real and how much are a scam? With the plural book title, who might any other fraudsters be? The primary possibilities are Frank or the author himself. It’s important for me to state, I’m not a healthcare provider, so my medical opinions included here are mostly driven by my common sense, though I did ask a nurse and doctor about the injuries presented in this book. At times, because of a few seemingly inappropriate medical treatments after a serious injury, I was unable to suspend my disbelief and it hurt my ability to enjoy some of the humor.

Initially, upon starting this work, I wanted to figure out who the scammers would be and enjoy the humor, but I found that the injurious medical issues dominated because they are either not meant to be as serious as presented, deliberately exaggerated to be humorous, part of a con, or the health care providers treat some of the injuries incompetently. Mental health is handled better medically than some of the physical injuries. There’s also a story line about standup comedy and preparing for the Edinburgh (Scotland) Fringe Festival comedy contest. The nice drawings are crisp, minimalist lines with no shading, except grey wash, black clothing and Frank’s dark hair.

After the prologue, we see Frank talking comedy and laughing with his comedienne friend, Ro, “[This] year we start therapy and don’t kill our house plants [page 8, and foreshadowing a funny scene on page 114].” Frank then gets a fateful phone call from Giorgio to say he was hit by a bus and (says off panel) he’s at the hospital. Frank fantasizes Giorgio in a full body cast, though after arriving at the hospital it appears the injury is minor, because Giorgio is outside the hospital smoking. Giorgio explains an ambulance brought him to the hospital the night before and he’s been discharged. His left arm is swollen with skin that almost appears broken—to my untrained eyes it looks like a compound fracture or nearly so. He had been drinking the night before, and his injury is anything but minor. Frank has Giorgio go back in the hospital. An x-ray (why wasn’t this already done?) is taken and shows, both his ulna and radius have clear breaks, so I would expect the pain to be excruciating. Even after the x-ray, the doctor on call sends Giorgio home with a bandana sling and says ‘To repair this break, we’ll need to surgically implant metal plates along the bone. You’re booked in [for the surgery] for the end of the month. [25]” This is unbelievable to me. According to a doctor I consulted, “[To delay] seems unlikely. It looks like a pretty significantly displaced fracture and to not treat that urgently would allow for healing to begin in a malformed way, potentially requiring re-breaking healing bones to realign them.”  Later that month, the surgery on his arm occurs, taking five hours; and, again unbelievably, almost immediately afterward Giorgio is ready to go home. His arm is in a sling; and metal plates don’t look like they were implanted. A doctor (?) claims he’ll be “… loopy for the next hour …” Giorgio and Frank appear to be walking home and get lost on the way! None of this makes sense medically to me. I’m speculating after this surgery he’d at least stay overnight in hospital and his arm would be held by pins in traction to keep the arm unmoving against his body for at least a reasonable time period. But what do I know? I can quibble further when Giorgio later cons Frank out of 200 pounds for a fancy sling, when a quick web search shows good slings in the UK cost about 20 pounds.

Much later in The Con Artists, Giorgio falls on the pavement, accidentally on purpose? Frank is called and told by someone, “[Giorgio]’s in the hospital with some minor brain damage,” which could be a concussion. At the hospital Frank learns Giorgio has loss of hearing in one ear and a fractured skull.  Are all of these accidents part of a con, but the resulting serious physical injuries not anticipated by Giorgio?

Frank also has his own medical issues. He repeatedly talks about his anxiety and panic attacks and sees a therapist, Emma, for help. Frank is treated with “Cognitive Behavioural [UK spelling] Therapy for Anxiety. [41]” Before treatment, Frank, fills out a mental health questionnaire, and indicates he’s beyond his usual severe anxiety … now it’s “really severe.” He laughably argues about the questionnaire scoring scale, being 1-6, because he can’t pick an average score … only slightly above (4) or below (3). Frank’s mental health treatments appear reasonable (e.g., to slow or stop panic attacks by telling himself what is truly real, such as the ground beneath his feet). He also uses his mental health and Giorgio’s injuries in his standup routine. Again, my untrained eye finds it odd—or I may be taking The Con Artists too seriously—that Emma later claims that Frank never really had anxiety disorder because of measurements she made in a goofy graph showing Frank’s zig-zag scores were never high enough to indicate he had anxiety disorder. I’ve never heard of such measuring by a therapist for a mental health condition. I wonder if this zig-zag graph and Frank wearing a shirt or sweater with a zig-zag stripe on it are supposed to mimic Charlie Brown’s iconic zig-zag shirt.

Some aspects of The Con Artist are entertaining, including a devious con that Giorgio does to acquire home supplies. I also enjoyed the changing relationships between Frank, Giorgio, Emma and Ro; and between Giorgio and his father. There are funny moments during and after standup comedy routines. The medical missteps give me pause to not give a wholehearted recommendation of The Con Artists; but I do favor reading it for the relationships and comedy and not to learn about medical treatments. And finally, an editor of my review raised an important question: “If the plot of a comic raises health issues is there a responsibility on the part of the creator to at least make the handling of it realistic, assuming the mishandling isn’t part of an intentional plot line?” It would’ve made this work much more enjoyable for me.

Luke Healy has an Award of Excellence from the Museum of Comics and Cartoon Art, NYC (2014) / Ignatz Award nomination, Outstanding Minicomic (2016) / Slate Cartoonist Studio Prize shortlist (2016) / Book of the Year, Publishers Weekly for Healy’s How to Survive in the North 2016 / and Best Books of the Year, by The Guardian for Healy’s Americana, 2019.