Home / Comic Reviews / Comic Books / The Courage To Be Me 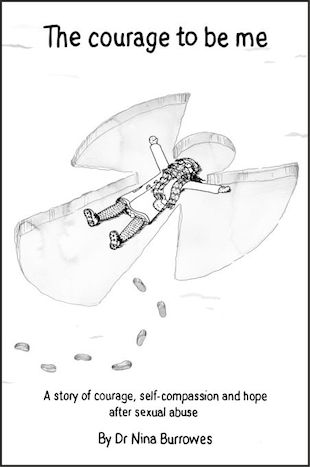 Nina Burrowes’ illustrated book is, primarily, a self-help tool for people living with the psychological consequences of sexual violence. The work was originally conceived and produced to be viewed, free, on Burrowes’ website, and it can still be found there. It has also been published using Amazon’s print-on-demand platform and, although this means the finished printed object lacks the finesse of graphic narratives produced by publishing houses, this format serves to emphasise that The Courage To Be Me is a determinedly practical document, with utility for its intended readership at its core.

Burrowes has styled herself as ‘The Cartooning Psychologist’ and includes some of her own drawings, but limits herself to pages of exposition and encouragement. The talents of established artists Alex Bertram-Powell, Katie Green and Jade Sarson are employed on individual chapters telling the stories of various members of the group. The variety of visual expression helps in revealing the different psychological states and perspectives of the women, but whether it is the diffuse greys of Bertram-Powell, Green’s intricate linework or the subtle Manga influence Sarson brings to the characters and drama, the emotional momentum of the short narratives remains intact and affecting.

The Courage To Be Me avoids psychological jargon and academic argument, instead focussing on the extraordinary effort it can take for abuse survivors to get through everyday life, and how those coping mechanisms can themselves be damaging. The introduction of ‘windows of tolerance’ is as technical as the language gets, but, even then, Burrowes seems to have been careful to make use of a term that has a simple but effective visual representation. This and other veiled references are made to mindfulness without calling it such, again possibly to steer clear of jargon but perhaps also to sidestep any danger of a ‘one approach fits all’ interpretation. For while the book offers hope, and outlines the benefits of seeking and undertaking therapy, it is also pragmatic in its depiction of the struggles ahead for those on a therapeutic journey.

Although the characters are fictional, the book was inspired by Burrowes’ qualitative evaluation report on Gestalt group therapy at the Portsmouth Abuse and Rape Counselling Service (PARCS). It might be argued that the written research document would be of most value to mental-health and social-care professionals, but the illustrated book makes the needs of survivors its focus, never allowing personal hopes and fears to be overwhelmed by clinical preoccupations. As such, it would be useful for anyone to whom a survivor might disclose abuse, both as an insight for professionals into survivors’ experiences, and as a publication that can be offered as helpful reading to clients or their loved ones.

The commitment of support organisations and workers is enthusiastically portrayed – with Heather Wilson on drawing duties – in an epilogue that Burrowes uses to highlight the value of groups such as PARCS and to warn how precarious their existence can be in the fight for funding. Burrowes is clearly passionate about making therapy available and viable for those dealing with trauma, and this approachable book can make an excellent first step on the road to rebuilding a life after abuse.