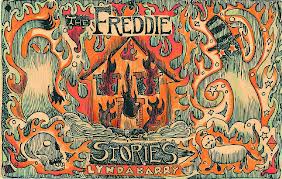 These powerful stories of bullying and mental illness, of childhood trauma and abuse, originally ran as four-panel square format strips in weekly alternative newspapers in the US during the late 1980’s and early 90’s. I remember seeking them out in the Chicago Reader every week. Barry was one of the first cartoonists to show that comics can address serious, often painful issues. At that time, though, readers had at least a week to recover from each installment. This distilled collection is powerful enough that one might want (and need) to take a break between the often troubling four panel strips, but they are so compelling as a collection that it’s almost impossible to put the book down.

Barry’s signature 3.5 x 4.5″ panels run four across this landscape book, reading directly across from your left hand to your right as you hold the book, drawing you in. The panel layouts are also signature early Barry as well, with clear, all-caps large text divided by a solid line from a detailed ink drawing below. As the story progresses, the drawings become more hatched, detailed, tangled, like the mind of the protagonist Freddie. Toward the end, the narrator of the strips switches between Freddie and his two siblings, Marlys and Maybonne. At times the drawings are from the perspective of Freddie, and the top narration is the voice of one of his sisters. In lesser skilled hands, this would lead to narrative confusion, but Barry employs this shifting narration flawlessly.

The collection includes a present-day introduction by the character Marlys. 126 pages in, there is a comic afterword by Lynda Barry, for which she breaks the previous layout and speaks to us through 7 x 4.5″ single panels, one across each page.  Her reflections are “about ten thousand days since I wrote these stories” and talk about where stories exist in time, in place, our consciousness. She then introduces the “Lost Stories” that fill the remainder of the book but were not in the 1999 edition of this collection. They take us even deeper into the homework, the mind, and the fate of poor Freddie.

Barry writes, “I wrote these stories, I drew the pictures, but the world they bring about isn’t mine. The gaps aren’t mine. These things don’t belong to anyone. And that’s a relief.”

These are powerful accounts of some of the very difficult things of childhood that we might rather forget, but should always remember.