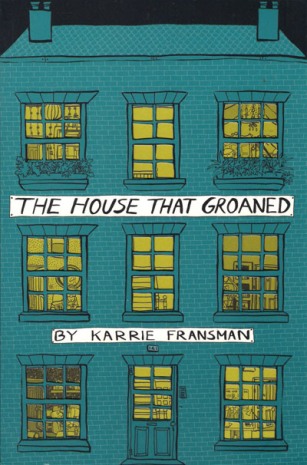 Karrie’s talk at Comics and Medicine: Visualising the Stigma of Illness

‘A cosy, one-bedroom apartment on the first floor of a charming Victorian conversion. Newly decorated and with a separate kitchen and reception room. Located just a bus ride away from a wide range of shops, restaurants and bars.’

Welcome to The House that Groaned and the six lonely inhabitants of its separate flats, characters so at odds with themselves and their bodies that they could only have stepped out of the pages of a comic novel. There’s Barbara, our make-up artist heroine and man-made blonde bombshell; Matt, the photographic retoucher who can’t touch; Janet, the tormented dietician; twenty-something Brian, the diseaseophile whose sexual penchant takes him to the edge of perversion; old Mrs Durbach, who literally blends in to the background; and the gloriously fleshy and hedonistic Marion, matriarch of the Midnight Feasters. Behind the house’s anonymous facade, the building is decaying. As pipes explode and walls collapse, events force the residents out of their doors and into each others lives – with dramatic consequences.

Exploring the themes of body image, sexuality and the loneliness and isolation of contemporary urban life, The House that Groaned is a modern-day fairy tale full of magic realism and farcical symbolism which will woo both comic fans and attract new readers to the medium.”