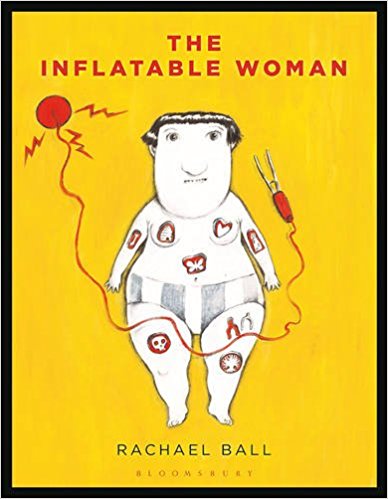 Every so often an ambitious graphic novel appears that pushes the boundaries of the form, revealing new possibilities for storytelling. The Inflatable Woman by Rachael Ball is such a work. We talk about illness memoirs; well, this book is that and more, extending into illness poetry.

The Inflatable Woman is an impressive volume at 544 pages. The striking front cover image is a reference to the board game Operation, the everyman replaced by the woman at the centre of the story undergoing cancer treatment. It’s the first of many references to children’s games.

The book opens with a verse from ‘Last night as I was sleeping’ by Spanish poet Antonio Machado which includes: ‘And the golden bees were making white combs and sweet honey from my old failures.’ This sets the scene for a ‘quest narrative’, to use Arthur Frank’s terminology, and one that is presumably based on personal experience. The intricacies of the narrative certainly suggest this.

Ball creates a large cast of characters including a menagerie of animals that accompany the protagonist, Iris, on her illness journey. It’s a journey that brings up painful existential questions—‘haven’t got a lot to show for my years, have I?’—which makes the support she receives from loved ones even more indispensible. Alongside the main cancer narrative is a poignant internet romance which is mostly experienced as a disembodied relationship. Like with other graphic pathographies, disclosure of illness—whether to or not—is an important moment in the storyline.

At times the cancer is named unflinchingly with no softening of the blow. ‘You have BREAST CANCER,’ says Dr Egg, shedding tears. ‘I’m sorry.’ In that encounter Dr. Egg is depicted as an enormous being while Iris and Nurse Bobby are small. Doctors and other healthcare professionals are given symbolic names which perhaps relate to Iris’s perceptions of them, what she recalls of those surreal moments in waiting rooms and hospital wards. The whole body is brought into the intensely physical experience of cancer and zoomed in on. The eyes. The mouth. The breast. The breast is a recurring image, analogous to different objects, such as a mound with a tree growing on top where the nipple would be.

Iris’ experience is one in which the breast cancer diagnosis brings out a vulnerability and helplessness in her, perhaps something she last felt as a child. The recurring nursery rhymes are provocative, not only in terms of their form but as texts themselves, suggesting a loss of innocence as the true and sobering meanings of the nursery rhymes becomes apparent.

The book has a unique visual style with many pages consisting of single grayscale panels on black backgrounds. However, there’s a great deal of movement, with different sized panels sprawled across pages, constantly shifting the reader’s gaze. The pencil drawings have not been inked which lends the work a wistful, unfinished feel, a feeling they could be easily erased.

The Inflatable Woman is described as ‘magical realism’, a literary term that somehow feels a bit limiting here given comic books are, by their very nature, already magical in how they describe reality with the shifting perspectives, the rich metaphors, the dream-like sequences. There’s a sequence I particularly liked which is an echo of anime film Spirited Away by Hayao Miyazaki, a young girl’s journey of self-discovery.

The illness journey is one that commands introspection and in this story it’s through writing that Iris finds solace. In addition to nursery rhymes and songs are numerous references to writers including Herman Melville and Ernest Hemingway. But it’s ultimately poetry that’s turned to—Antonio Machado, Walt Whitman, Robert Louis Stevenson. The latter’s poem ‘The Sick Child’ is realised in its entirety in a beautiful sequence of images.

As Krista Tippett said in a recent interview, “poetry across cultures and across time rises to the surface in moments of crisis and confusion.” With The Inflatable Woman, Ball demonstrates how poetry—as well as comics—provides a language for the crisis and confusion of cancer when nothing else will do.

About the reviewer: Sheila Ngoc Pham is a PhD candidate at the Australian Institute of Health Innovation at Macquarie University. She completed an Erasmus Mundus Master of Bioethics in 2014 and her thesis focused on graphic medicine. She adapted it for radio and it was broadcast on Ockham’s Razor, ABC Radio National: How comic books can improve healthcare (link to podcast)