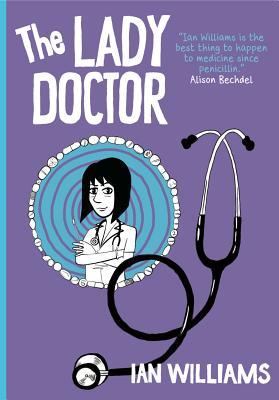 The Lady Doctor by Ian Williams provides the daily activities of Dr. Lois Pritchard, general practitioner (GP), in her work and home life. It’s filled with funny anecdotal events, interesting patients and caregivers, English and medical vernacular, and descriptions of medical treatments and prescriptions. The book’s cover repeats the author’s iconic medical symbol of the stethoscope which appeared on the cover of his first graphic medicine work, The Bad Doctor (2014). In addition the cover shows Dr. Pritchard, arms crossed, holding a swab surrounded by a circle of pills foreshadowing the importance of drugs to this work. This graphic work is drawn realistically resulting in a very human story that the reader can feel. It’s primarily inked in black and white with various color washes providing some shading and to distinguish the locations in Wales—not always consistently—where events occur. There is an exception to the color washes late in the work, when a full color sequence is fittingly provided. The author unwinds Lois’ life slowly; adding details as the graphic work progresses. For example, Lois’s dog is introduced as Potkin on page 20 then on page 99 we learn that he was originally Lois’ father’s dog and actually named Peter Kropotkin (1842-1921) for the Russian anarchist. Lois works part-time at both a doctor practice clinic and a hospital in the genito-urinary medicine department. There are many funny encounters between patients and caregivers. I highly recommend this work. To provide full disclosure, please see the caveat later in this review about the connections between the author of The Lady Doctor, the publisher, graphicmedicine.org, and me.

Wales is part of the United Kingdom’s National Health Service (NHS). The NHS provides comprehensive healthcare benefits at little or no direct cost to patients with a common complaint being long waits for some services; it’s mainly paid for through general taxation. Most doctors, nurses and other health care providers are directly employed by the NHS; though there are some private practice providers. Most hospitals in the UK are publically operated by the NHS. The Lady Doctor doesn’t always show ethical or professional doctors; but it does show very human ones with lapses in judgment. This graphic work leaves some issues unresolved (e.g., we never find out if one doctor has their license revoked, curtailed or otherwise penalized for an unethical prescription drug request).

The book opens at Meddygfa [Welsh; meaning surgery or clinic] Llangandida Health Centre (blue wash).  Mark Leach, a patient, visits with Dr. Lois, as the staff and patients like to call her, and threatens suicide if she doesn’t provide him with a refill on his prescription, just stolen by, he says, “my bitch of a girlfriend.” Dr. Lois refuses because he only gets one script per week. Mark leaves frustrated and Dr. Lois is annoyed. He pops his head back in her office while she fills in the visit on his electronic medical record and says across two panels: “Um doctor … I forgot to tell you about this rash on my foot …[close up] It really kills.” Dr. Lois steps out for a smoke. She sees another patient walking by who asks her for a fag (cigarette). She gives him one making him promise to tell no one of her “secret” smoking. She goes back in the clinic telling him to stay away from the nearby gas tanks. Both of these scenes give typical examples of the author showing medical and friendly encounters between the protagonist and another person ending with humor.

When Lois stepped outside a medical partner (Dr. Robert Penri) at the clinic shows his sexism by asking another doctor (Dr. Iwan James) if Lois—not yet a partner—might “bugger off” to have a baby since she’s nearing forty. Iwan doesn’t expect that to happen. Iwan also provides some social commentary when Lois talks to him about patients on benzodiazepine. Over two panels he says, “Personally I think they shouldn’t be used for anxiety or insomnia [because of their addictive quality] … But so many people are on them … Big Pharma makes a killing.” Here we find a common prescription and its side effects both personal and societal.

We learn of Lois’ estrangement from her mother. Her mother and her medical needs are at the heart of this graphic work. Lois shares concerns with friends, peers and relatives. Why are they estranged? Why does Lois’ mother try to reconnect with Lois? What role will the estrangement play? Can and will Lois help her? The Lady Doctor answers these questions.

There are a few cartooning “inside” jokes where the names of cartoonists Raymond Briggs and [Allison] Bechdel appear. The former makes the graphic work go slightly meta when the author has Dr. James say a patient looks like a Raymond Briggs’ character. That is, a graphic work character from The Lady Doctor looks like another’s graphic work’s character. For your edification Raymond Briggs, UK cartoonist, has produced wonderful fiction and non-fiction tales which include When the Wind Blows, The Snowman, and Ethel & Ernest, among many others. Bechdel’s (Fun Home, Are You My Mother, Dykes to Watch Out For) ironic mention is from a man who tries drunkenly to pick up Lois in a bar. His t-shirt reads Bechdel 0. Zero implies loser and Bechdel’s mention could be both a shout out to a great cartoonist and a quip at the Bechdel Test, which usually applies to movies but could be as equally applied to graphic works; and The Lady Doctor passes that test … especially in this scene.

Other medical treatments we learn about in The Lady Doctor include: testing if an epileptic seizure is being faked with supra-orbital pressure; live liver donor transplantation process; hepatitis C; sexually transmitted diseases (STDs) and treatment with antibiotics (azithromycin and injectable ceftriaxone); examining remains before cremation; use of magic mushrooms (liberty caps; psilocybe semilanceata; aka psilocybin) to treat depression; base of skull fracture; CAGE questionnaire for alcoholism; and PHQ-9 questionnaire to measure level of depression.

Some English vernacular includes fag (cigarette), post (mail), bugger off (leave), sodding (swear word about not caring or an unpleasant man), deed poll (to recognize a name change), arseholes (I bet you know), bollocks (originally: testicles, now: nonsense or expletive for acccident), bloke (a man), mobile (cell phone), having a think (it’s what you think), summing (slang for “something”), crusties (persons exchanging daily work clothes for weekend alternatives), torch (flashlight), and scupper (to mess up plans).

First, The Pennsylvania State University Press is the publisher of The Lady Doctor as part of their Graphic Medicine Series; second, Ian Williams is a general editor of The Pennsylvania State University Press Graphic Medicine Series; third, four of the thirteen books—so far—selected in the Graphic Medicine series are from their editorial staff; fourth, Ian has two other books (The Bad Doctor and co-author of Graphic Medicine Manifesto) published in the Series; fifth, Ian Williams is a founder and leader at the graphicmedicine.org website where this review is appearing; sixth, I’ve seen and talked to Ian at several Comics & Medicine conferences; and finally, I was asked to review Ian’s book by another graphicmedicine.org leader who’s on the publisher’s editorial board of the Series. After all that, can I be objective with this book review? Of course not, but I’m never objective with a book review and that’s never my goal with a review. My goal is to give the reader background on the book, provide what I enjoyed and didn’t like if anything, discuss the design and artistry, and to not have any conflicts of interest in or the outcome of the review. I’m not objective when I do a review because I look for my emotional attachment in books I like and my reviews follow from all the knowledge I have from reading comic books in my youth to more recent medical-related graphic works (fiction and non-fiction). If I’m not emotionally attached then I usually don’t like the graphic work. The Lady Doctor is a very worthy addition to the graphic medicine canon, regardless of the connections mentioned here.