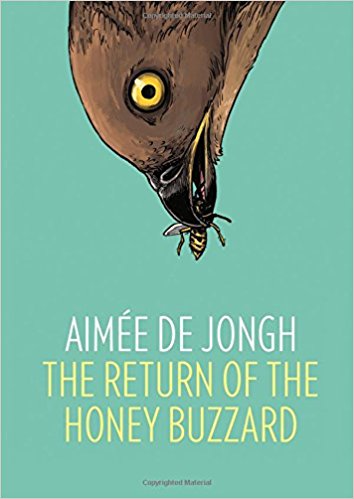 Publisher: Self Made Hero

This fictional graphic novel has the impact and realism of a non-fictional work about bullying, depression and suicide. The back cover indicates this work is Aimée de Jongh’s first graphic novel, though it’s a very mature work. The drawings are beautiful, showing scenes from nature, grade school, and adulthood. The story flows naturally with events surrounding Simon. He’s having trouble closing the multi-generational used bookstore he inherited from his father. The graphic work shows recent and past painful moments that he feels extreme guilt about observing but not preventing. Some scenes Simon lives and some are his mind’s invention. Michelle Hutchison translated this book from the Dutch. I highly recommend this work.

The title, The Return of the Honey Buzzard, comes from the honey buzzard bird, which enjoys eating both honey and bees. This bird mates in Holland in the spring, and before winter migrates back to Africa. Both honey buzzard mates migrate separately, presumably to prevent both mates from dying, perhaps from a sandstorm, during the winter. When they return to Holland the next spring, if both survive and arrive about the same time, they will meet up again to nest. If one doesn’t survive, he or she will mate with another honey buzzard; and if they arrive late they will find their ex mated with another and the late arrival will also find a new mate. The honey buzzards start over with a new mate, which becomes a metaphor for Simon trying to start over under three intertwined situations: by closing his bookstore, the recent death by suicide of a stranger on the railroad tracks, and his best friend dying in childhood. Starting one’s life over is the main theme of this graphic work.

Three other characters play large roles in Simon’s life; two in adulthood: his spouse, Laura, who wants to sell the bookshop—not close it down; and Regina, a student who needs to research magical realism; and the third comes from his childhood, namely his best friend, Ralf.

Rather than sell the store to a chain, make “lots of money,” and have it remain a bookstore, Simon wants to end the store by selling its remaining stock and shuttering the place. This leads to several arguments with Laura. Simon goes to their offsite storage cabin where excess books are kept. The reader sees him being nostalgic when he picks up a book on birds—he had wanted to be an ornithologist when asked by his teacher, “What’s your dream job?”

Simon is the most introspective character, and becomes almost catatonic in the present when, on the way back to the store, he sees a woman welcoming death, with almost no doubt, from an oncoming train; And he only watched, though he might’ve had time to push her off the tracks. But would he have been able to save her?

Regina ends his catatonia when Simon almost walks out into traffic on a rainy day and she holds him back. Simon now opens up and wants to help Regina. She joins him a few times at the cabin where many books are stored. Simon goes there to bring back books for their going-out-of-business sale.

A flashback to a snowball fight between best friends, Simon & Ralf, showed the battling fun of youth. But nostalgia quickly becomes very troubling when the reader sees real battling by Ralf being bullied, beaten up, and infatuated with guns from his older brother’s military service. There’s some justice served up against the bullies, but not the romanticized kind of no one getting really hurt; rather everyone was hurt! Simon’s guilt from childhood events haunts him in adulthood.

Starting over becomes the most positive solution for those who survive.