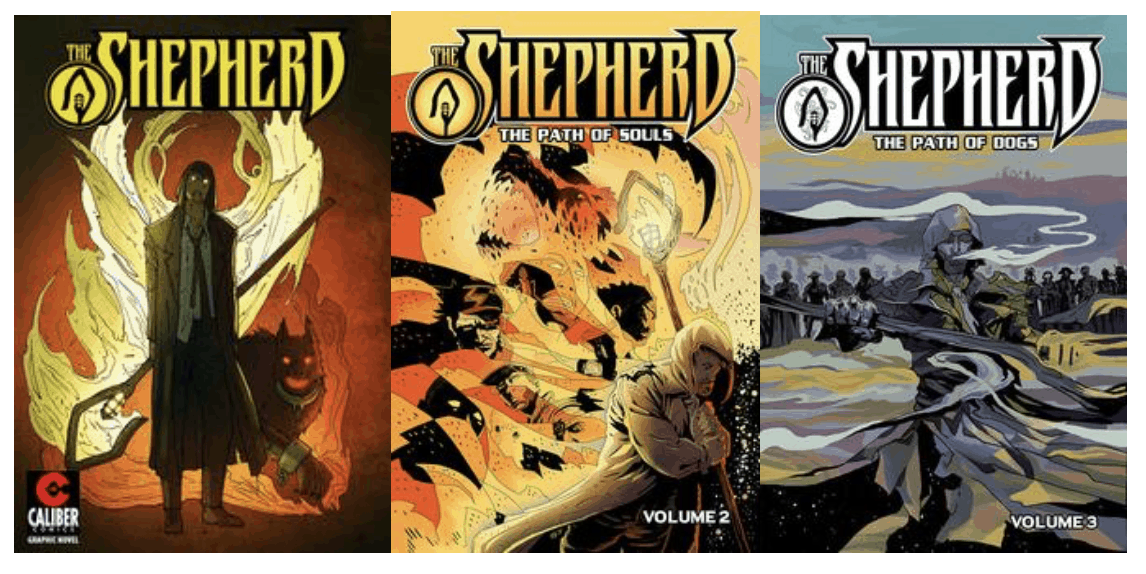 The Shepherd is a supernatural graphic novel series of three volumes (so far) with at least one more in the works. I will spend less time here on Volume One, because it doesn’t have significant medical content, but I’m providing background of that volume for the reader to better understand the second and third volumes (The Path of Souls and The Path of Dogs, respectively) which do have more medical content. In the first volume and early in the second volume, especially, there are religious metaphors based on the New Testament; Andrea, the primary author, received his PhD in New Testament and Early Christianity). The Path of Souls and The Path of Dogs emphasize Post-Traumatic Stress Disorder (PTSD) in veterans. Beyond PTSD, there are many other themes addressed in every one of these volumes which make the stories confusing.

The Shepherd Volume One summary. Dr. Lawrence Miller’s—Theologian & Professor—son, Val, dies from a methamphetamine overdose. Lawrence feels his son needs him in the afterlife. Lawrence decides to kill himself, leaving his wife and two other children, to search for his son in The Seam, the realm between earthly life and heaven. Lawrence encounters his long dead father, Franco, who gives him the “Staff of Truth.” After receiving the Staff, Lawrence becomes The Shepherd. He uses the Staff to wreak revenge on those that killed his son. The Shepherd eventually forgives all who trespassed against him. Lawrence is forgiven by his wife, who appears ethereally in The Seam, for killing himself and leaving her to care for their children. His living wife and children don’t reappear in volumes two and three. Rather than move on to his heaven from The Seam as Franco desired him to do, Lawrence and Val decide to stay and help others get through The Seam.

One major premise for The Path of Souls and The Path of Dogs series is Post-Traumatic Stress Disorder (PTSD) in veterans. For background on PTSD please see later in this review. Since all events in volumes two and three of The Shepherd take place in The Seam everyone is dead but can still, and often do, relive past war events. This creates an issue of what the “P” means in PTSD. Afterall if a character keeps reliving traumatic events in The Seam, are they really after (i.e., post) the original trauma? It’s as if they are living it for the first time over and over again. I prefer the term Peri—for during—Traumatic Stress Disorder in these volumes. There are four wars with different war-fighters that Lawrence, Val, or Franco jump between. These battles include the Civil War (1861-62), the Battle for Fallujah (2004), the Siege of Jaffa (1799), and Native “Canadians” (Wendat/Huron/Iroquois) in 1648, before Canada was so named, with the additional character Sondaqua. I bring them up in this order because a flashback of these battles occurs in that order in The Path of Dogs. The only reason I have for showing so many different wars wasn’t to show how PTSD might manifest itself differently, but to show the desires and research of the authors with the realistic visualization of battle scenes (varying uniforms, weapons, scenery, language, etc.). The primary manifestation of PTSD herein is reliving events in reality and not the other symptoms (like sleeplessness, depression, among others listed in the essay at the end of The Path of Dogs discussed later). There was one exception to war caused PTSD, namely Dr. Lawrence Miller in volume one of The Shepherd.

Lawrence suffers from PTSD in that he appears to be sleepless, he’s quick to anger with his remaining family, he isolates himself from the rest of his family, he keeps reliving the guilt of his son’s death, and desires revenge against those who he feels killed his son. He resolves his pain by forgiving himself/others, being forgiven, and by helping other PTSD sufferers.

The other PTSD victims presented in The Path of Souls and The Path of Dogs are men for war related trauma. I usually don’t reveal critical events in a tale I’m reviewing, but I think it’s important that the following event could’ve been presented with a more expansive understanding of PTSD (skip the rest of this paragraph if you don’t want this climactic event revealed). The Path of Souls presents a war crime in the Siege of Jaffa from a man’s perspective (i.e., Henri’s) and his guilt of not stopping it. This event is presented in black and white except where red blood spews. An older, white-bearded man (father/grandfather?) tries to protect a mother and daughter. The man is beaten and killed by graphic bayonet stabs (“shunk shunk”). Henri protests and is knocked aside. This scene shows the rape of a mother and daughter. In their own language the women reach toward and tell Henri these words: from the mother “<No! No! Stop! … Please do not give up!> and from the daughter “<No!! Momma, Help!> (Emphasis in original.) The mother tries to stop her daughter’s rape only to be killed after gouging her rapists’ eyes. The Path of Souls ends here. The women are nameless. This story could have followed on with the women’s PTSD. Or it could have presented both Henri’s and the women’s perspectives. PTSD doesn’t only happen to men and it’s not only because of war trauma. It can occur from domestic violence and many other causes. One of the women appears briefly in The Path of Dogs (pages 35-36) with Henri holding her head as she ages before the reader’s eyes, “<Why didn’t you save us?>” Henri clearly understands her words and gives his justification for inaction, including “The [war] campaign was a nightmare. I was desperate to escape. Survive. All I thought of was my wife … My daughter. … Return to them at all costs. … I lost them anyway. After this [not stopping the rape?]. I knew I could never go home. I wasn’t worthy. I died days later from plague. Ironic, No?” The Path of Dogs quickly moves on to inter-mixing the various battles and to allow Henri to act heroically by trying to stop other women from being raped and/or killed. And The Shepherd supernaturally tries to end soldier’s trauma.

The Shepherd plays out in The Seam between “earth and heaven” where everyone is already dead. The reader could conclude that trauma is forever or possibly needs solving before moving on to what’s beyond The Seam. Unlike most books that want to look at PTSD in individuals, this graphic story has put itself in a bind. Since its protagonist is a god-like figure (The Shepherd) in The Seam, presumably it’s supposed to resolve everyone’s PTSD. But The Shepherd only takes on a handful of people affected by a few wars. A lot of time in The Path of Souls and The Path of Dogs is spent on war, battles, acting macho, and little on PTSD and how it was resolved for individuals.

Here is some additional information that might’ve been helpful for the reader:

Orange/Yellow are the brightest and positive colors in these works; whereas darkened shadows and deep greens provide the heavy weight of often hate-filled and immoral characters. As mentioned earlier, sometimes these works become black and white for increased drama. These orange/yellow colors also occur when The Shepherd wields his Staff of Truth, presumably, for good, though The Shepherd sometimes causes more destruction than typical military arms. War scenes are well-designed to allow the reader to be an observer of events as they unfolded. To its credit the war scenes are very realistic from the uniforms to the equipment, even some of the language. Characters aren’t consistently drawn so at times I had trouble figuring out who’s who (e.g., Chapter 1 of The Path of Dogs has Will Brannigan and Val as hard to tell apart and hard to separate from anonymous battling/dying/already dead other confederates in Civil War scenes). At the back of every volume is an Art Gallery with over twenty pages of character/scene images by various artists.

At the end of The Shepherd: The Path of Dogs is the essay “Post-Traumatic Stress and Post Traumatic Growth” by Myrna J. Wahmhoff Molinari. It defines PTSD as “your brain perceive[ing] a threat and turn[ing] on the alarm, triggering a life-saving response for flight, fight, or freeze. When [your mind] fails to turn the alarm back off after the threat is over, post traumatic symptoms develop.” According to Natalie Wardlaw at the New England Graphic Medicine virtual conference on March 28, 2020, there’s a distinction between complex PTSD and other PTSD. Complex PTSD occurs from repeated and prolonged trauma rather than trauma occurring from a single event. Therefore, I would call the PTSD in The Shepherd Complex Peri-Traumatic-Stress-Disorder. These symptoms might include insomnia, fear, paranoia, isolation, anger, depression, pain, weight loss/gain, crying, self-destructive behavior, illicit drug use, family strife, emotional explosions, hyper vigilance, and agoraphobia, among many others.

This essay emphasizes one therapy called Accelerated Resolution Therapy (ART) which trains the PTSD sufferer to reimagine the cause of the PTSD without the disturbing images. She explains that she has ended PTSD in some individuals without knowing the cause. Ms. Molinari co-founded Warrior Mission: At Ease which provides retreats for veterans to work on overcoming their PTSD. She writes “the important thing is for you to continue to push forward and use the resources and relationships available that can support you along the way.”

The Path of Souls and The Path of Dogs try to accomplish too much and fall short. They try to address: colonialism, indigenous tribes battling other tribes (1648), revenge, U.S. Civil War (1862), forgiveness, reliving one’s worst moments, Battle for Fallujah by Americans (2004), the Afterlife, Napoleonic Siege of Jaffa (1799); suicide, PTSD, war crimes including rape, the Wendat culture, humorous/serious dialogue, frustration with how the dead act, language shifts, historical figures, resurrection/animating the dead, Lawrence slipping in and out of being The Shepherd, Armageddon, military terminology, Christianity, reenacting battle scenes, history of some real events, family relations, a puzzle to see if pieces fit together, memory failings, worthiness to wield weapons (like the Staff of Truth, and The Bow of Youskeha), reality vs. non-reality, occupiers vs. the occupied, foreigners vs. locals, military vs. civilian casualties, demons vs. humans, rescuing a handful among carnage, battle logistics, fog of war, hallucinations, time, immortal/mortal souls, The Shepherd (god-like/spiritual-like/shaman/human/Christ-like/super-hero-like) protagonist with his side-kick son and Wendat native (father, son and ?)) part of most if not all the stories, to say nothing of the military dog. And this list of themes/characters/events was in no particular order nor meant to be complete. These graphic works would have been much better if they had stuck to perhaps one or two themes per volume in well-defined settings; or, alternatively, linked together the disparate war characters in some way. Perhaps the next volume of The Shepherd: The Tether will fix these shortcomings and reduce the confusion.