Home / Comic Reviews / Graphic Novels / The Story Of My Tits 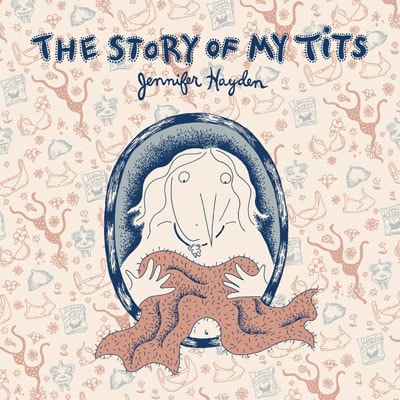 Originally published in the Journal of Graphic Novels and Comics.

Published in the year 2015 following the critical acclaim of graphic onco-narratives such as Cancer Vixen: A True Story  (2006) by Marisa Acocella Marchetto and David Small’ s  Stitches: A Memoir  (2009), Jennifer Hayden’ s The Story of My Tits  which is located in the discourse of graphic medicine, is not just a reminiscence of breast cancer remission but a journey of a woman in a world that ‘ expect[s] big things of [her] body’  (7). As a pre-teenager, looking at the images of Playboy  magazine strewn across the coffee table by her father, Hayden internalises the significance of bigger breasts and how they earn veneration from the world. Tits, she realises are the key to liberation and later, as a flatchested adolescent, she even confesses thus, ‘ I wanted tits more than anything in the world. I thought they were the answer to all my problems’  (9). After joining college, Hayden grows into a nubile woman and revels in ‘ boob power’  (28) until her diagnosis of breast cancer. The immediate bilateral mastectomy followed by the reconstruction surgery of her breast leaves Hayden grappling with her childhood apprehension of whether ‘ guys were only interested in tits…  [or] personality’  (13). The Story of My Tits deftly resolves Hayden’ s quandary by visually reconstructing her breasted experience.

Divided into 15 chapters excluding the epilogue, The Story of My Tits  is concerned with the illness experiences of Hayden; the failed marriage of her parents; her relationship with Jim (her husband) and the life and death of Theodore and Alice (parents of Jim), among others. Unlike the majority of breast cancer narratives with a predictable beginning, middle and an end, or what Thomas Couser (1997 , 42) calls the ‘ comic plot’ , Hayden’ s narrative enunciates the contingencies of life and thereby emerges as a convincing and persuasive narrative. By documenting her life experience from childhood to breast cancer remission, the artist provides insight into the cultural and emotional significance of breasts in a woman’ s life. Accordingly, with the progression of the narrative, Hayden’ s interpretation of breasts alters from a mere feminine somatic signifier to a complex reminder of a life lived in uncertainty.

Further, by narrating the life stories and struggles of five different individuals –  Jennifer’ s mother, Alice, Ford (second husband of Alice), Theodore and Claudia (second wife of Theodore) –  the graphic narrative also purveys myriad responses to illness and death. While Jennifer’ s mother recuperates from breast cancer in stoic silence, the gregarious Alice finds solace in discussing her pain with her family members. On the other hand, the relationship of Alice and Ford, Theodore, and Claudia during chronic illness emphasises the emotional and moral benefits of mutual support. Witnessing the ways in which these individuals confront and cope with their illness fortifies Hayden to reconcile herself with her own breast cancer diagnosis effectively.

Departing from overt sentimentalisation and triumphalistic discourse of breast cancer narratives, The Story of My Tits  discusses two major elegiac themes – ‘ Noli Me Tangere’ /‘ don’ t touch me’  and ‘ Memento Mori’ /‘ remember you have to die’ . Affected by chronic illness, Jennifer’ s mother, Alice, and Hayden go through the phase of ‘ Noli Me Tangere’  (a term she borrows from Sir Thomas Wyatt’ s poem‘ Whoso List to Hunt, I Know where is an Hind’  (1557)) where illness and the prospect of death forces the patients to seclude themselves from the rest of their family and friends. As a typical post-millennial breast cancer narrative, Hayden’ s text does not shy away from exploring the concepts of grief, bereavement, and death. In fact, with the demise of Theodore, Claudia and Alice prepare both the readers and Hayden to confront and compensate for the loss of an individual through memories and objects. Tellingly, on the eve of her mastectomy, Hayden memorialises her breasts by designing a handmade poster that contains coloured impression of her breasts along with plaintive farewell notes such as ‘ go in peace’ , ‘ baby food’ , ‘ so long’  (285) among others.

Unsettling the reader’ s expectation of a predictable triumphalistic closure to the narrative, Hayden also narrates her experience of gall bladder infection after breast cancer remission. In the chapter entitled ‘ The End: Untitled’ , Hayden discusses the surgical removal of her gall bladder and how it leaves her completely despondent. In particular, after the diagnosis, Hayden loses her composure and the positive thinking that she imbibed from yoga and from the unnamed Roman Goddess of Fertility. Insisting on the fact that things go chaotic even after diligently practising well-being techniques, the graphic narrative remains realistic and unsentimental. In short, The Story of My Tits suggests that ‘ we [should] go on living with our uncertainties’  (344) and accept the contingencies of life; as Hayden’ s therapist puts it, ‘ [we] won’ t be the same person. But [we] will go on’  (280).

Artistically, Hayden’ s use of black and white sketches, simple line drawings, systematic panelling (2×2), quirky asides, extensive detailing, self-deprecating and gallows humour are evocative of the drawing style of underground comic artists such as Aline Kominsky-Crumb, Julie Doucet, Debbie Drechsler and the commix generation in general. Hayden’ s avatar as a long sharp-nosed and frizzy haired woman at once makes the graphic narrative specific and universal. Further, in deploying the line drawing techniques such as hatching, cross hatching, stippling, scribbles and small dashes, Hayden creates an exquisite visual tapestry of own her life. Given the aforementioned strengths, it is not a surprising that The Story of My Tits  was nominated for the 2016 Will Eisner Best Reality-based work, along with the works of Riad Sattouf, Lucy Knisley, Bill Griffith among others.