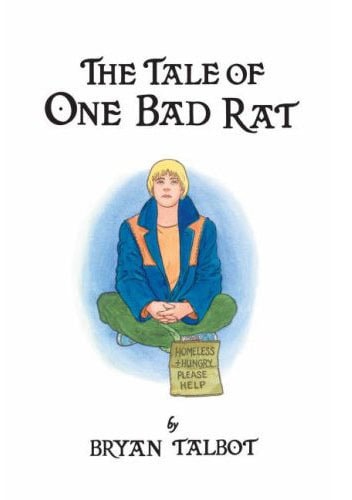 Rather than coming from direct experience of the author, this is a fictional story based on Talbot’s research into child abuse and incest. The main character, Helen, runs away from home after suffering sexual abuse at the hands of her self-centred father and emotional deprivation from her self-pitying mother. Begging in London and living in a cardboard box, she manages to dodge further molestation before falling in with a group of rough but friendly squatters who give her food and shelter. Her only real friend is a pet rat she has rescued from the dissection laboratory at her school. Understandably, Helen is wary about trusting other people, but is fascinated by the intelligence and loyalty of rats. These despised and persecuted creatures run throughout the book, which tells of Helen’s journey to the Lake District , following in the footsteps of her heroine, Beatrix Potter. The rat serves as a metaphor for “the other”, the outsider, misunderstood and defamed. Potter’s life is briefly sketched out as Helen identifies herself with the authors flight from London, away from her rigidly disciplinarian parents. Helen finally finds peace and a good home, living with a welcoming couple who run a pub. Walking alone in the hills, she is able to work through her guilt and self loathing and finally confront the damage her father has caused to her mind when the parents are invited up to the inn for a final confrontation.

The book is part homage to Beatrix Potters work, with extracts from an unpublished work, as imagined by Helen. Like the original children’s books, Bryan Talbot uses real locations in London and the Lake District as settings for the story. It handles the different thread of the story neatly, interweaving the theme of the journey self discovery with others of isolation. loneliness and abuse. Talbot does well to not overdramatize, whilst making clear the harm that is caused to the child by the errant father, who does not think he has done anything much wrong because “he loves her” (and he didn’t penetrate her)!  The use of the rat as a metaphor helps us to percieve what Helen is feeling. Metaphors and visual imagery are two important and pervasive ways of conceptualising illness and disease (Lupton 2003:54) and work particularly well in the comics medium. In a short epilogue, Talbot suggests that talking about child abuse is taboo, and that not talking about it does not stop it happening. This books talks about it in a realistic and  non-mellodamatic way, and as such could be an important resource for those working in this area.