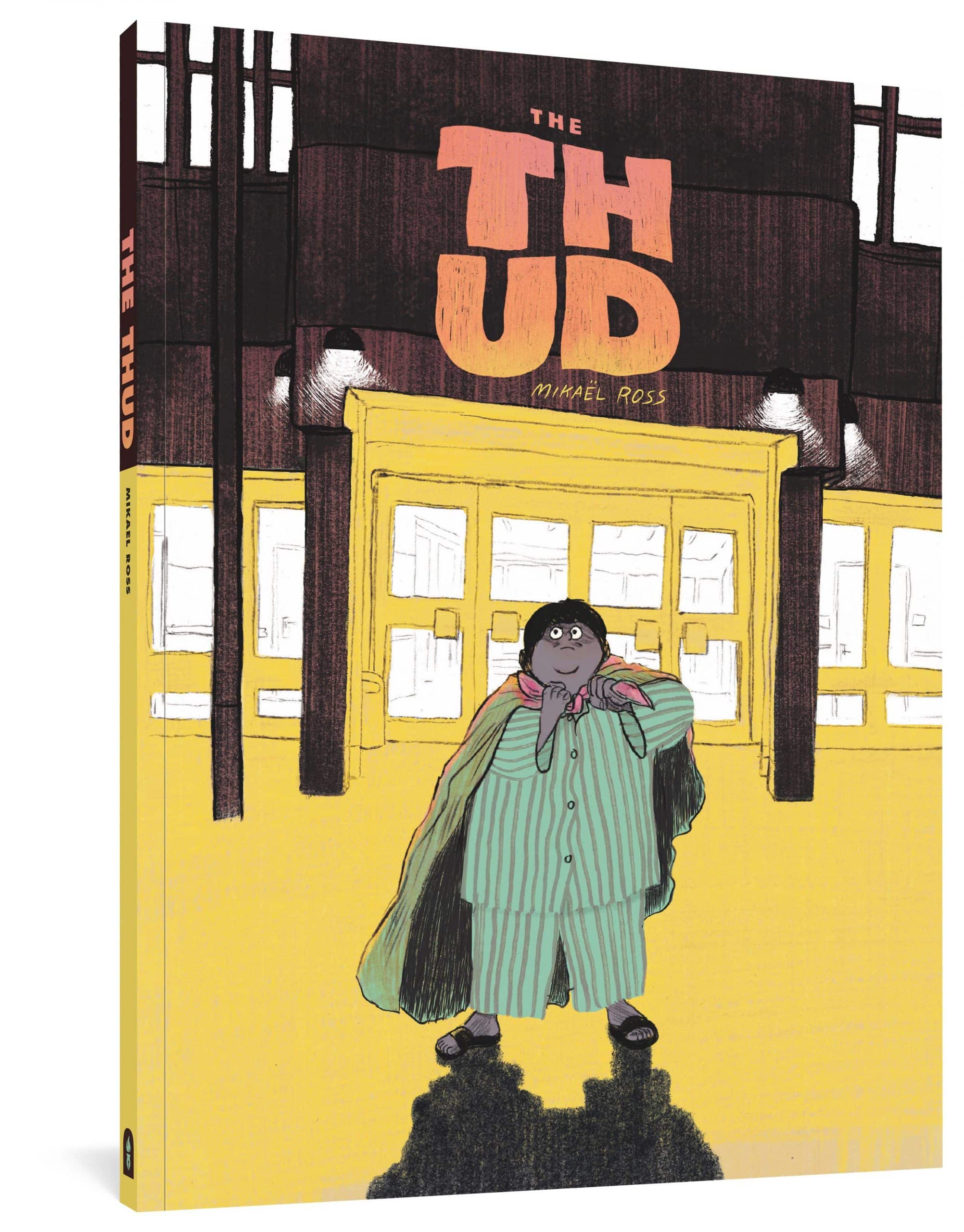 “There is a village in Germany called Neuerkerode that is largely populated and run by people with developmental disabilities …” so begins the inside book leaf of The Thud (original German: Der Umfal) by Mikaël Ross and translated by Nika Knight. Empathy is the strongest theme in this narrative, where the reader sees and feels Noel’s (protagonist) story from his perspective. At the book’s end is an unlabeled—like Noel’s mind, since he can’t read and is very visual—map of Neuerkode, where the author spent two years visiting and learning from its citizenry. Unlike other reviews, I’ll use some stream of consciousness here to match Noel’s own path; his mind is open to what really happens without attachments—except his mom (“Mumsie”) and later Princess Penelope—direction, or time beyond the moment; it’s enough just being; while his world shrinks and expands. Stories through Noel’s eyes: wonder, confusion, fending for himself, and often lost (or found) in a world that mostly ignores him, except that it doesn’t because there is always some person who sees him and helps. Noel is developmentally disabled; no that’s not it … he’s emotionally real, frail, honest, open, committing to the moment. With only a few page-header breaks (e.g., “Love”) and almost no narration, The Thud’s color pencil illustrations fantastically create Noel’s mind and travails. I highly recommend this work.

A delighted birthday boy, Noel, shops with his smoking, frazzled Mumsie during Christmas season while creating his own song (Ooh commmee and adorrre him … Born the king of Guinea Pigs …” (page 3)) Mumsie gifts him a real guitar—to replace his “air” version—and AC/DC tickets for home-based Berlin concert. AC/DC appears repeatedly.

The book displays Noel’s immediate emotions (confusion, frantic desires, pain, etc.) and provides empathic lessons for the reader—like, Noel awakens to “THUD!!!” (6) sound; climbs on stool with tiptoes to peek in high bathroom window; sees Mumsie bleeding on floor; frantic he calms self by dumping plant and dirt from pot; places pot on head … to think. What to do? What to do? “The doctor has to come … Mumsie calls the doctor …Mumsie can’t call him now …” (8) Noel pictures fish (see below) which become “772.” 772? I guess the number is for German emergency; I do internet search … success; I had misread number; it’s “112,” Germany’s fire and medical emergency number. Noel calls and has frenetic back-&-forth with emergency operator; goosing out his address. Later, Noel is abandoned at the hospital in medic-blanket—now his cape—that Mumsie was wrapped in. 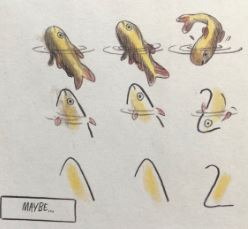 To Noel hospital doctors are (metaphorically) quacking ducks— “They talk loudly. Don’t take a breath. i don’t understand anything … Cooma … Mumsie had a stroke …” (17) Noel’s mom is put in a medically induced coma. Noel flees from hospital beeps; covers self with cape. A kindly nurse becomes his protector; she calms Noel by speaking of his royalty without a castle now, and giving meaning to his cape.

“A man with a ‘stache is the boss now” (21) brings Noel to Neuerkerode’s Wabeweg (“wabe” = honeycomb, “weg” = way) house and ‘stache departs. Neuerkerode is in north central Germany, 146 miles from Berlin. Noel doesn’t forget his AC/DC concert tickets. Sometimes he wanders off or escapes by bus or train … eventually brought back because the community knows or learns where he might live … and no authorities overreact.

Everything about this graphic work is touching … emotionally … visually … conversationally between characters … Here’s my description of one panel (panel 1, page 29). First some context: Soon after Noel arrives at his Wabeweg house, he hides away in his room. Robert, who’s there to help the residents, leaves Noel’s meal outside his closed door and quickly departs. We see a bit of red to the right of the door. Noel peeks out the door and reaches for the plated food. In the gutter (i.e., between panels) from the bottom of one page to the top of the next: Noel must have picked up the plate of food. The panel (see below): Noel’s shocked (exclaims “H!”); drops the plate with a “Clang;” while a spiked (exclaimed) word balloon reads “When is your birthday?!” and to the right of the door we see the source of the inquisition: Valentin, a blond-haired savant (with names and dates, we learn); and the touch of red becoming a couch. Hyperbolically, all panels and pages are revelations, essential to the reader’s understanding and emotional feeling of the story. The drawings are beautiful and even off panel-gutter movements are wonderfully implied. 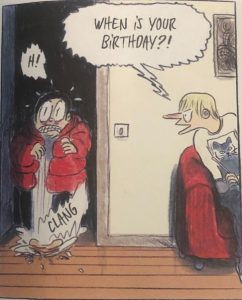 Conversations can move from the mundane to the existential. A dead bird is found in the woods and Noel declares it had a thud and is “inna cooma” (41). Pop culture icons (e.g. Rihanna, AC/DC) are mentioned to situate the work in the current day. One German phrase (“Mensch-Ärgere-dich-nicht:” Man, don’t get angry) is kept untranslated and repeatedly used by one character.

A short tale captures Germany’s horrific past, during the Holocaust, from Irma, an elderly Wabeweg resident; and her gentleness makes the past crimes all the worse. Germany’s master race insanity led to such barbarity as the Sterilization Law with 300,000 – 400,000 people labeled “feebleminded” being sterilized starting in January 1934 and “200,000 – 250,000 mentally and physically handicapped persons”  killed in concentration camps; from the Jewish Virtual Library. The U.S. wasn’t immune to this wretched thinking; see 1927 U.S. Supreme court 8-1 decision Buck v. Bell “to uphold a state’s rights to forcibly sterilize a person considered unfit to procreate” which led to some 70,000 forced sterilizations in the U.S.. The micro of Irma’s story hits so much harder than the macro: 300,000+ sterilized and 200,000+ killed!!! That’s one of the shortcomings of our human minds.

The Thud has a satisfying conclusion by not having a conclusion. In March 2021, the American translation of The Thud will be released to much acclaim (I expect). According to the publisher, Mikael Ross received Berlin’s Senate Department for Culture and Europe’s first graphic novel scholarship.