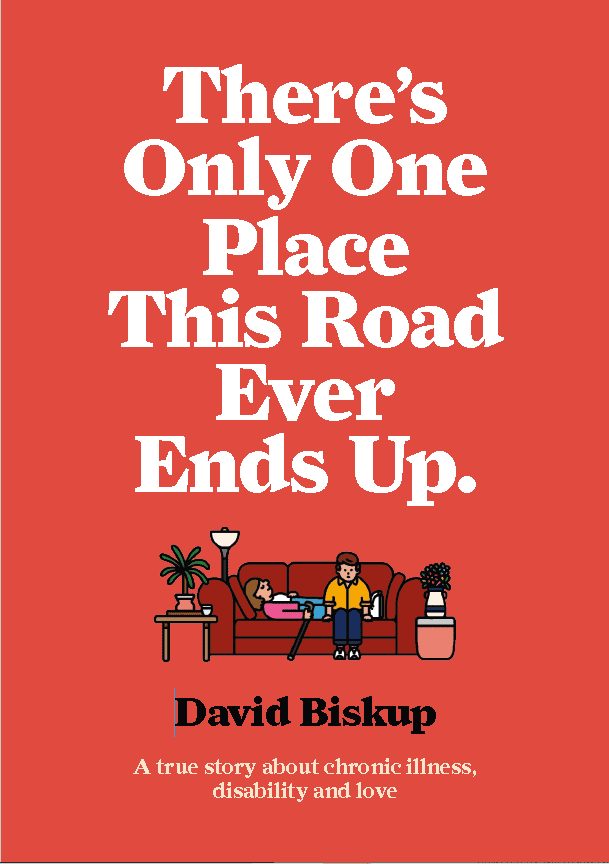 I wouldn’t have made a good health care provider; to act professionally without feeling what a patient is going through. I remember watching Born on the Fourth of July in a movie theater (remember those?). Ron Kovic, memoir author of the book of the same name, returns from Vietnam badly injured, paralyzed from the waist down. As I recall the movie, during his—played by Tom Cruise—rehabilitation he wants to prove he’s not paralyzed so he demonstrates this by using his arms to “walk” with rudimentary leg braces and therapy bars; and he falls and has a compound leg fracture. Without getting any more graphic here, I felt lightheaded and had to leave the theater. I squatted down outside the door to wait for my lightheadedness to end. Why am I writing all this? The book (There’s Only One Place This Road Ever Ends Up by David Biskop) reviewed here is the first book that has made me queasy because of what Hannah (the author’s girlfriend) has had to go through because of her treatments. This is a tale of Hannah’s bladder failing and its repercussions; her inability to control urination without medical intervention; and her frustrations, extreme pain, experimental solutions, and brutal honesty. This graphic work is a memoir, so the author will be David here when he’s a character. The emotional connections between Hannah and David are palpable. This might trigger in the reader pain, empathy, or impotence in being unable to help; or voyeurism to hopefully becoming more sensitive and sympathetic when seeing others in such pain. Finding a new normal to live with bodily disabling changes becomes the goal. I highly recommend Only One Place.

From Only One Place’s opening text: “Eventually Hannah lost her job. We finally saw a specialist and began using terms like disability and chronic illness. … We learnt about atomic bladders, high-tone pelvises and non-relaxing sphincters. We discussed spinal surgery, sacral neural modulation and pros and cons of lifelong catheterization (page 4).” Hannah had a “trial … sacral neural modulator device [attached] to her spine.” According to the University of Utah medical school, “for reasons we do not well understand” to help “improve or eliminate bladder overactivity and urinary leakage,” what Hannah had implanted provides electric stimulation to the nerves from the tailbone (sacrum) to the bladder.

Based on the photograph of Hannah and the author at the back of this work, I guesstimate them to be in their late 20s or early 30s. David is only able to be supportive, while his girlfriend suffers from experimental treatments, trips to the A&E (accident & emergency; UK’s version of emergency room), overhearing others’ successful pain reductions, and discussing Hannah’s pregnancy concerns about her disability. The reader also sees the toll on and frustrations of David. There’re many touching moments; for example, when they have normal activities like gift buying.

The artist/writer provides precise illustrations, finely inked, similar to Chris Ware (Acme Novelty Library series, Jimmy Corrigan (2000), Rusty Brown (2019)) or Nick Drnaso (e.g. Beverly and Sabrina, 2016). The single medical illustration of an implanted device in a body is finely rendered, but without shading or detail. It’s cartoony and yet realistic. Even though the images are drawn with no shading, at times there’s a cool three-dimensional or animation quality when the background is just a blur and its only David or Hannah talking in the foreground. Some pages are rendered with Hannah and David in hospital or elsewhere with only a white background reinforcing them being alone in all these difficulties. The language is as spare as the drawing; leaving the reader to complete unsaid words between them.

Going beyond the book, I watched this video, posted to East London Comics & Arts Festival (ELCAF) about the making of Only One Place.

This graphic memoir is based on diary entries the author kept over a year or so. On the video Hannah says, “Being portrayed in something like this … it’s absolutely terrifying …there was always more bad going on than there was good … to see the physical representation of it where actually I like the good stuff … far more of that than there was bad … it opened my eyes.” The character drawings sometimes make the adults appear as kids because their difficulties are overwhelming, and childlike innocence seems somehow fitting.

Many scenes are brief funny vignettes of domestic life. Gallows humor provides some relief to hospital stays (e.g., Hannah says, “I suppose at least if we crash [her wheelchair veering badly] we’re in the best place. (11)”). Infections were common which led to runs to the A&E. While at other times, the author writes, “I was watching her …[looking] incredible leaning on her [walking] stick. She made it look like …[a] fabulous accessory. … I was so proud of her [18].”

David visits his counselor/therapist, which lets the reader know David’s concerns. While talking to his therapist, the scene might change to Hannah’s and his joint activities. He speaks of her PTSD (post-traumatic stress disorder), but doesn’t explain it further. On one visit, he has an angry argument with his therapist about his relationship with Hannah.

Air travel provides an interesting bonus to Hannah. A vacation in Portugal is a well-deserved respite with positive thoughts about the future. Back home Hannah crashes into a daily living activity. David and Hannah have a very symbiotic relationship. At times the roles reverse between David and Hannah; for example, David’s “body completely locks up” (81) at times when he’s under stress and becomes manic and while Hannah has to do the rescuing.

There are a few scenes where strangers don’t accommodate Hannah’s disability, which leads to her frustration and feeling she doesn’t belong. David tries to shame transit riders into giving up a seat for Hannah, but shockingly and unabashedly no one accommodates her. At another point, we see (just as David does) an extremely personal note, that Hannah has on her phone that must have taken a lot of thought to decide to include it in Only One Place. The reader follows David during Hannah’s multiple operations; and we see the dark places his mind wanders with narration addressed to Hannah. For Hannah and David, there are also very beautiful scenes that make the pains and struggles worth it. Again, I highly recommend Only One Place.

Only One Place was the 2019 winner of the ELCAF x WeTransfer Award, begun in 2016, which provides a “grant that enables artists to see a project come to life.” ELCAF is the East London Comics & Arts Festival.