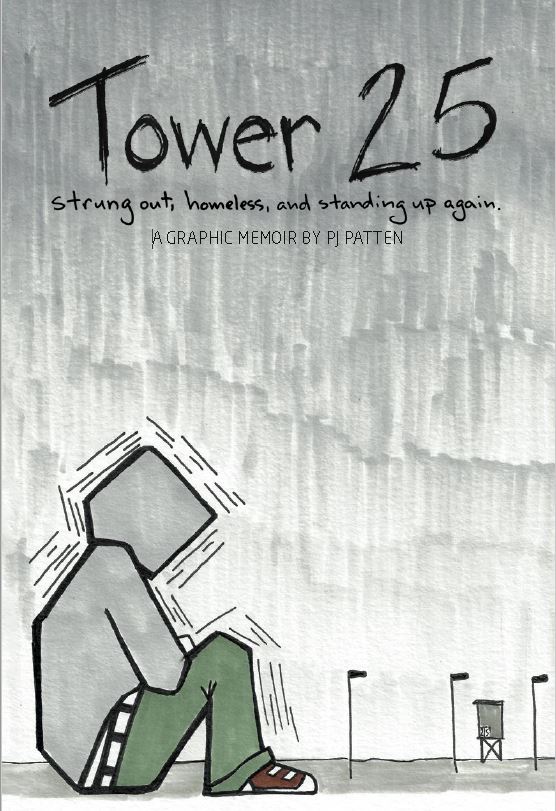 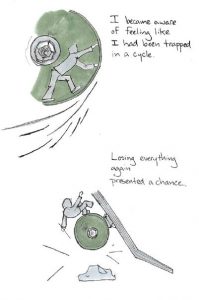 PJ Patten’s Tower 25 is the remarkable autobiographical story of a period of months some 15 years ago when, due to his methamphetamine addiction, the author became homeless in southern California.

When the story begins Patten persists in getting stoned despite the dire need for a new living situation: he’s been given only a few weeks’ respite before having to move out of his apartment. When the deadline passes, he begins walking for miles back and forth along the oceanfront, often sleeping near the lifeguard tower named in the title. It is during this journey of introspection and self-repair that Patten learns to be honest about his life and take responsibility for his situation.

What sets this book apart from similar ones is the spare, contemplative writing and striking visual style. This graphic novel has no panels and just one or two drawings per page, a format that conveys a sense of the protagonist being deeply alone with his thoughts and also the feeling of his being a tiny speck swimming in the vastness of the universe. The muted grey and olive-green palette underline the tone of despondency.

We see few faces clearly in the drawings; even the protagonist’s face appears mostly as a beard protruding from an omnipresent hoodie. But the figure’s stooped posture helps communicate his character and the narrative. Near the end of the tale, he has a polaroid photo taken for an application he’s seen for artists to live at a Buddhist temple. A few pages later Patten obtains a razor and shaves for the first time in months. “Bit by bit, I started to see my face,” he says (121). Interestingly, he still doesn’t fully reveal his full visage.

The book begins with a quotation from the 8th century CE Buddhist philosopher Shantideva about how suffering can lead to transformation. When the story ends, Patten goes off to spend the next 10 years at a Buddhist retreat. That framing led me to reflect on other Buddhist precepts: one that seems relevant to this story is “The Second Noble Truth,” which notes how humans cling to illusions we believe will make us happy or keep us safe. In order to save his life and begin again, Patten needed to let go of the self-deceptions that had chained him to meth.

This is a hopeful book with a happy ending, a story that seems clever and honest as it details how a life can still be recovered after having gone off the rails. I look forward to hearing more from PJ Patten.