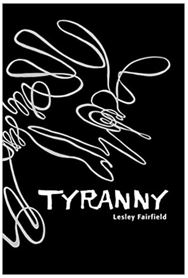 According to a 2020 report from the Harvard T.H. Chan School of Public Health and Boston Children’s Hospital, 28.8 million Americans will experience an eating disorder in their lifetimes, and one person dies from an eating disorder every 52 minutes.1 The insidious nature of eating disorders, in this case Anorexia Nervosa, is aptly portrayed as a tyrannical demon in Lesley Fairfield’s book Tyranny. In Tyranny, Fairfield masterfully depicts the struggle of Anna, a young woman grappling with unrealistic portrayals of women in the media, peer pressure, and a family that, although well meaning, can’t seem to provide the support or acceptance necessary to save her from self-destruction.

The book opens with a powerful image of Anna’s eating disorder represented by a string-like omnipotent demon, Tyranny, strangling her. Tyranny yells at Anna “I told you not to eat, you’re too fat!!!”, to which Anna responds, “But how can I live and not eat?” This brief interchange between Anna and her tormentor sets the stage for the rest of the book which dissects this dialectic conflict in great detail.

The origins of Anna’s Anorexia (subtype binging/purging) appear to be multifaceted and partially concealed from Anna’s own awareness. Many of the seemingly ordinary situations she finds herself in reinforce her negative self-concept. For example, she is hired at a restaurant because she has “just the look” they want. She finds pro-anorexia websites which provide a seemingly supportive environment, but which are ultimately echo chambers of delusion. Her close friends exercise excessively and have dysfunctional relationships with food. Given this pervasiveness, Tyranny is clearly an appropriate name for the book and her demon.

Anna’s demon, Tyranny, also illustrates how intrusive thoughts can destroy one’s self-esteem while simultaneously introducing myths about one’s problems into the psyche. For example, Tyranny places full blame for Anna’s binging on a lack of personal self-control, rather than persistent and flawed cultural messaging or self-judgement. This self-blame leads to feelings of guilt, resulting in less self-control, ultimately perpetuating the cycles of binging and purging. Additionally, throughout the book the author reveals how self-judgement perpetuates the cultural obsession with thinness, by Anna outwardly judging others, much the same way she judges herself.

Anna eventually commits to her recovery after her best friend dies of a heart attack brought about by Anorexia. She witnesses up close the devastating consequences of the disorder if left unchecked. In treatment, Anna discovers all the things that she has lost because of her illness: her passion for writing, her health, her freedom, and more. By uncovering these losses, she paints a more realistic picture of the disease for herself, one that includes the costs as well as the perceived benefits, and in doing so takes back control of her life.

Tyranny is a deep dive into the pressure cooker that is Anorexia. Although tens of millions of people in the U.S will experience an eating disorder, the individual experience of an eating disorder can be incredibly isolating. Works like this will hopefully help teenagers and adults alike connect to a common and shared pain, and reduce the stigma around eating disorders in general.

1 Deloitte Access Economics. The Social and Economic Cost of Eating Disorders in the United States of America: A Report for the Strategic Training Initiative for the Prevention of Eating Disorders and the Academy for Eating Disorders. June 2020. Available at: https://www.hsph.harvard.edu/striped/report-economic-costs-of-eating-disorders/.

Ryan Wright is an undergraduate student at Southern Oregon University studying Psychology. He lives in Medford, Oregon with his wife and cat Miso.