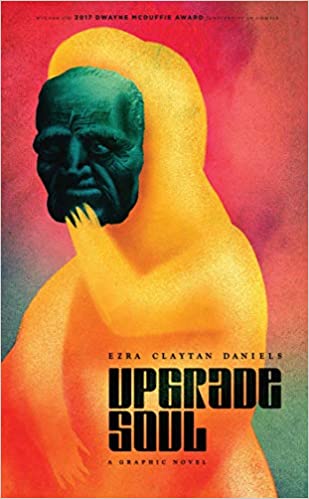 What if you were on the steep downward slope of life and were given the chance that you could live a lot longer than any actuarial life expectancy—perhaps to age 200—would you go through a risky experiment for such a long life? Personal ambition, quality/quantity of life desires, and experimental post-mortem ethical quandaries abound in the graphic science-fiction work by Ezra Clayton Daniels called Upgrade Soul (US). US could be a metaphor for humans struggling with their mortality, but it’s so much more. This is a wonderful, haunting tale presented from many perspectives: a brilliant child who acts like a child (Del Nonnar), senior donors (scientist in microbiology, Aunt Molly, & sci-fi writer, Uncle Hank Nonnar) with desire for immortality through their work—at least initially—experimental scientists with personal ambitions (Kenton Kallose, Garth Robardo, and Dr. Victoria Teel), and the humanity in clones (Manuela and Henry). US uses many of graphic novel’s tools beautifully, including coloration, illustrative artistry, fonts, time fluidity, and providing important events off panel. There are many other themes addressed herein: racial justice, experimental ethics, and familial connections, among them. Not only is US fascinating for the cloning science presented; but like all excellent science-fiction, it invents new scientific theories, like the “doppelgänger syndrome.” I highly recommend US.

When I read US for review I read about one chapter per day. I found the breaks gave me something important to think about between each reading. My thoughts whirled around dishonest scientists; ill-informed consent; secret motivations of the experimenters; could clones have inherent memories of their donor; and how important physical looks might be, among many others. US is worth reading several times.

The opening experiment of a child-built maze by “Dr.” Del Nonnar, perhaps eight years old, and her “assistant” Aunt Molly, provides an important experimental lesson. Pig-tailed Del, with clipboard in hand, has a rabbit (named Contessa) run through a maze of cereal boxes to her food. An intruder, neighbor’s cat, subverts the experiment by chasing the rabbit, which Del rescues. Aunt Molly traps the cat, and says, over three panels, “The two most important things to remember in the lab … are to always remain calm in an emergency … and to always learn from your mistakes.”

Senior citizens Hank and Molly Nonnar both find they’re being ignored by a younger generation. Hank’s science-fiction novels—an offshoot from his father’s 1940s animated series—has a white agent wanting to ignore its racial aspects. And Molly’s practical experimentation is being belittled by a young lab assistant for not keeping up with the new technology. They’re feeling like has-beens. Molly’s and Hank’s advice and work (his novels becoming movies and her pathogen studies) are no longer respected. Molly and Hank for their forty-fifth wedding anniversary gift become donors in two respects: they provide funds for a cloning experiment and become the first persons to be cloned! These experiments take place in the 1980s (e.g. rotary and push button phones; light bulbs on monitoring machines).

Beyond the cloning experiment, there are a few medical terms used in US: voice modulator [device to control the voice]; “rare congenital defect to the epicranial aponeurosis [cover of the top of the cranium] rendering [Ayko, a dog] blind and deaf at birth [and] …myofibril atrophy [a protein breakdown] and osteopenia [reduced bone mass];” and “parasitic craniopagus twin [conjoining of twins at the head].” The success (or was it?) with Beeko, Ayko’s dog clone, and the different outcome with the Nonnar’s clones remind me of Daniel Keyes’ Hugo Award winning short story “Flowers for Algernon,” which was made into the movie “Charlie” with Cliff Robertson winning Best Actor Academy Award.

US shows many of the tools available in graphic novel to phenomenal effect. There is excellent use of coloration & fonts. Pre-experiment the colors are primarily soft autumnal colorations; while the post-experiment emphasis is on light and deep greens. The speech font for the clones and one very sheltered non-clone have serifs as machine-like generated voices—through a voice modulator or voice-generating hand-operated device—while the other humans speak with san serifs. The reader slowly gets the backstory of the protagonists; like how the Nonnars made their millions; and the real reason Kenton Kallose has for his cloning experiment. US starkly Illustrates the physical changes to Hank and Molly from pre- to post-experiment, due to being cocooned for seven weeks. The clones, Henry (for Hank) and Manuela (for Molly), modulated language at first is complete words but, as they grow more familiar with the language of their counterparts, start using contractions. There’s an amazing sequence which uses a drawing taped to a wall of facial features with no border and projecting the shadow of its creator to make the “head’s” informing border. US breaks the fourth wall of cartooning, by having this drawn image “talk” with the drawer’s voice. And there are plenty of events that happen between the panels (e.g. the pitch to fund the cloning experiment) that’s left to the reader’s imagination!

Ezra Clayton Daniels won the Dwayne McDuffie Award for Diversity in Comics in 2017 for US. “The Dwayne McDuffie Award for Diversity in Comics is given to an American Comic Book that is committed to diversity and inclusion. It is named in honor of Dwayne McDuffie, a creator known for his work writing, editing, and producing comics and animation. The nominees and winner are chosen by a selection committee of comics and animation professionals.” Other winners include Nilah Magruder in 2015 for M.F.K, G. Willow Wilson and Adrian Alphona for Ms. Marvel (2016); Jamar Nicholas for Leon: Protector of the Playground (2018) and Ivy Noelle Weir and Christina Stewart for Archival Quality (2019) (From https://en.wikipedia.org/wiki/Dwayne_McDuffie_Award_for_Diversity_in_Comics on April 7, 2020). US is worthy of many accolades.