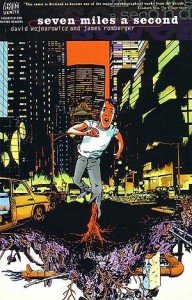 ‘ I can’t abstract my own dying any longer. I am a stranger to others and to myself and I refuse to pretend that I am familiar or that I have history attached to my heels. I am glass clear empty glass. I see the world spinning behind me and through me. I am a stranger’

Thanks to Maria Vaccarella for flagging this up. David Wojnarowicz was a writer, painter, photographer, film maker and performance artist. He died of AIDS in 1992. Seven Miles a Second is  a self portrait, a collaboration between Wojnarowicz and his friend, James Romberger, begun around 1988 and completed by Romberger and his wife, Margeuritte Van Cook in 1996, 4 years after the writers death.

This is raw stuff, beginning with vignettes of a 12 year old David selling sex to older men, through years of teenage abjection- living on the street, malnourished and abused-  to life as an adult with HIV, finally segueing into a howl of rage and anguish. The narrative text is poetic, becoming a monologue, fractured and at times opaque. The narrators voice counterpoints the short scenes from David’s story: picked up and used by older men; sleeping in doorways or dossing with junkie friends; trying to mug a stranger for change.

As David becomes an adult, his friends start dying of AIDS. Visiting them in hospital he witnesses the degeneration of their bodies and finally has to come to terms with his own imminent death. Raging at the hypocracy and intollerance of politicians, preachers and doctors, he dreams of destroying the city.

Despite the rather grim subject matter, like A Child’s Life this book is actually aimed at teenagers rather than adult readers. And why not?- it is a sad fact that many will identify with David’s early years, as well as his anger and rage.