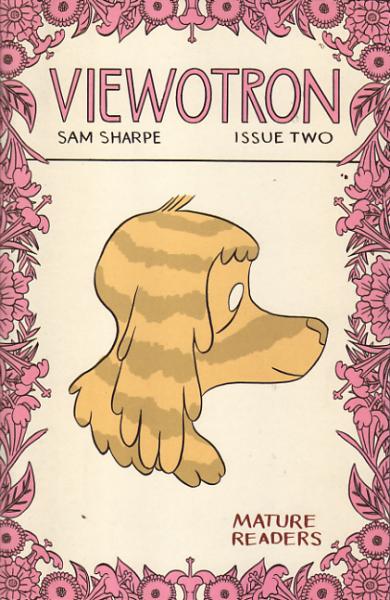 A Powerful Portrait of Psychosis

Viewotron offers a powerful image of not only a devastating mental illness but the toll that such an illness can have on those who care for them. Sam Sharpie’s graphic novel would be a valuable asset to any family member seeking to better understand his/her relationship with a loved one struggling with a psychotic disorder. Whether as an educational experience or safe place to commiserate though a shared experience, I think this short piece is well worth the read.

I would like the start by pointing out some scenes I found most powerful, starting with the opening. We are introduced to Sam and his mom’s schizophrenia through a conversation between Sam and a friend as kids. This was a great way of neutralizing the potentially charged topic of schizophrenia. Sam’s friend is surprised that Sam is allowed to read the letters from his mother, which are full of dramatic delusions. In this way, we are distanced from Sam’s mother as her beliefs seem quite outside social norms. However, this scene is followed by black panels with information about the mother which brings her closer. These panels seem to symbolize the ambiguity and distance in their relationship and perhaps foreshadow the struggle for clarity which occurs throughout the story.

Another powerful moment for me as a reader was Sam’s feeling of tightness in his chest around his mother. This tension seemed to grow throughout the piece until Sam’s mother confronts him about not acting on her delusions. I have often had a similar feeling in my experience with severe mental illness in my own family. It was calming to know that I am not alone in this feeling. Sam obviously wanted a relationship with his mother and cared for her, but he also had his own life and could not protect her from her own delusions. This made me wonder if such feelings are common, and if so, I think family members may feel supported by this piece as I did.

I thought Sam’s approach to his mother’s attacks (e.g., claiming to have made his girlfriend leave him, calling him selfish) was instructive. I think it is tempting to argue with these claims and defend yourself. Sam did not just lie down and take it, but he did try to change the subject and remain supportive. Psychosis can make empathy difficult. Realities can change, bend, and blend so quickly and without much of a clue until you have already lost balance in your interaction. Viewotron illustrates this difficulty time and time again as Sam seeks to understand his relationship with his mother. In the end, we are still left with distance but there is peace in Sam’s father sharing that he had a good dream about Sam’s mother. There seem to be acceptance that the dark valleys of such a relationship do not have to negate the bright hills.

Finally, I thought Dianne, though a minor role, had an important lesson to share. Upon meeting Dianne, Sam is surprised how normal she seems. Dianne is friendly and seems like an excellent support for Sam’s mother. Nevertheless, we quickly learn that Dianne has troubles of her own which ultimately overpower her. It is amazing how much pain we can hide. Dianne’s life seems to encourage an understanding that a loved one might be hurting tremendously beneath a very amicable demeanor.

To balance my praise, I should also share a couple critiques. It would have been nice to illustrate that mental illness does not have to end in suicide or familial exile. The story had important lessons with how it was told, but this piece might be less helpful for patients struggling with these conditions. Along this same vein, I was surprised Sam’s mother did not get better mental health treatment. We hear that she is taking medication, but the medication does not seem to be working well for her and perhaps she could have benefited from a different one. This is an important battle in maintaining such a caring relationship which may have added to the piece.

Overall I found this piece extremely powerful. The emotion is so rich and layered that it could easily be read multiple times as one seeks to understand their relationship with a loved one. Perhaps even beyond mental illness, Viewotron may support others struggling to understand a distant relationship with a parent. I would strongly recommend this book to anyone struggling with a family relationship, especially one complicated by serious mental illness. This short piece has much to offer.