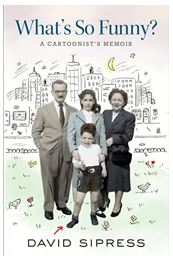 What’s So Funny? A Cartoonist’s Memoir is one long therapy session or twenty-six sessions (aka, chapters). It includes 107 drawn illustrations, mostly the author’s single panel cartoons from The New Yorker, and a few family photographs. Though I’m not a cartoonist, I strongly empathize with this work, being a funny tale about this non-religious Jewish son of an immigrant father who seeks his father’s approval of his passion and career: cartooning. The family dynamics between parents and their son (David) and daughter (Linda) is the secondary story after the primary one of David’s life in words and cartoons. There are plenty of funny anecdotes. We often read about his talking-therapy sessions and life story play out as the cartoons he provides. I highly recommend this work for its honesty, portrayal of some inner working of this cartoonist, and serious and not-so-serious laughs.

After twenty-five years of trying, when he was selling his cartoons elsewhere, David Sipress had his first New Yorker cartoon purchased before, but sadly, not published until mid-1998 after his emotionally distant father (and a few years after his mother) died. His father (with his parents and siblings) immigrated from “Medzhybizh/Ukraine/Russia” from a photograph (page 141) in July 1914 at age 8; “… [his father] kept an impenetrable silence about his distant past, refusing to volunteer anything more than a few enticing tidbits about his childhood in the shtetl, his time living as an impoverished immigrant in Brooklyn [New York City], or virtually anything at all about his family [140].” His mother “was a wonderful artist who loved to draw and was also a talented painter. … She was also an accomplished pianist, and sang beautifully … [but never took] precedence over her primary vocation—keeping our apartment clean and beautiful and cooking delicious meals …  [68].” Money meant a lot to his father, who made his living as a jeweler—even stopping an armed robbery, which became hilarious only in hindsight—and kept track of all his sales on handwritten note cards with a detailed hand drawing of the piece sold. His sister, Linda, had a troubled life and treated David cruelly at times (e.g., David’s sad chapter of the “Flying Turtle”). Linda in adulthood was diagnosed as bipolar and struggled unsuccessfully to live independently. David’s main supports come from Ginny, who he marries, his cartooning career, and his therapy sessions.

After dropping out of college—that his father was paying for—David finally tells his father he wants to be a cartoonist, his father shouts, “… What are you, five years old? Did you ever hear anything so ridiculous? I’ll tell you one thing—don’t expect another penny from me if you go ahead with this. … [152]” One of the cartoons he made around this time was a man saying, “Play dead!” to his dog on-all-four paws; with the next panel of that dog on his hind legs, strumming a guitar and singing “Drivin’ that train, high on cocaine …” part of the Grateful Dead’s Casey Jones song (1970). David appeared in the Boston Phoenix, an alternative paper; and made silkscreen posters, and did some sculpting. On several occasions, David’s mom asks him, “You had a happy childhood, didn’t you David?” I think this question came mainly because of his unknown-to-David-at-this-time sister’s struggles and dependency on his father.

David makes an illustration (247) comparing himself to his father by listing several topics (“Had a plan for the future even as a boy,” Had to be his own boss,” “Conflict averse,” …) under his father and on his own side providing check marks for each item. He finds he’s a lot like his father, no matter how much they had argued. Page 198 includes the longest caption I’ve ever seen on a cartoon (175 words) of an elderly father lecturing his adult son on his up-by-the-bootstraps-life to … “You don’t understand the meaning of money. [198, emphasis in original]”

I’ll close with one of David’s opening cartoons of a Venn diagram, two circles that have an intersection; the circles are labeled “Me” and “Life” and their overlap is “Cartoons. [xiv].”