“For me, the first years are lost” – a poignant beginning by Omar Mohamed to When Stars Are Scattered, visually magnified by a spectacular night sky, purple and dark with stars of pink and fuchsia. This becomes immediately juxtaposed on the next page, a splash spread showing a young Omar and his younger brother, Hassan, looking through a barbed wire fence at other refugees in the bright and arid desert of Kenya, in a refugee camp called Dadaab. These two sequences reveal much about When Stars Are Scattered, Mohamed’s graphic memoir about growing up in Dadaab as a Somalian refugee after fleeing from a small town called Mareerey during the civil war in Somalia during the 1990s. For clarity, this review refers to Omar as the character within the narrative, and Mohamed as the author of the memoir.

When Stars Are Scattered begins roughly seven years after Omar and Hassan reached Dadaab; as best as Mohamed can recollect at that time, he is eleven and Hassan is ten, but he does not actually know when his birthday is (42). Omar and his brother are just two refugees among hundreds of thousands of other refugees, and the resettlement selection process is very slow, almost lottery-like. As such, the graphic memoir follows Omar as he pursues an education at the local school while waiting for a chance to leave Dadaab to resettle in America. Myriad medical issues arise in this memoir, including PTSD, mental illness, seizures, debilitating hunger, pregnancy, drug use, and depression, along with navigating impoverished systems of healthcare (and, far more often, lack of healthcare).

Smartly drawn by Victoria Jamieson and featuring colors by Iman Geddy, the graphic memoir fits neatly in the children’s graphic memoirs camp (middle school and up), but has broad, universal appeal, particularly to educators. Jamieson worked closely with Mohamed to visualize his experiences and memories, drawing characters in bold outlines and establishing life in Dadaab with universal and clever cartooning; her knack for visualizing movement is equal to her capacity for showing quiet contemplation, loss, and wonder. Mohamed writes that Dadaab is actually made of three smaller camps: Ifo, where Omar and Hassan are housed, along with Dagahaley and Hagadera. Here, Jamieson’s drawings emphasize Omar’s local life within the overpopulated camp: each major section of When Stars Are Scattered opens with a new double-page birds-eye view of Ifo.

Perhaps even more significant is Iman Geddy’s coloring. Mohamed’s story is entrenched in Dadaab, and Geddy renders the space vividly, emphasizing the dry heat of the camp without making it monotonous. As noted above, Geddy’s coloring highlights the night sky, amplifying Mohamed’s narration of his dreams, hopes, and struggles when the camp quiets down. Geddy’s colors further help characterize the protagonists through vivid clothing colors, which reify the poor conditions of the camp: Omar is primarily drawn in just two shirts throughout the graphic memoir, both red; Hassan in blue. This becomes significant later when Omar and Hassan have to dress up in nice clothes, their shirts clean and fitted.

As a refugee narrative, When Stars Are Scattered provides keen and necessary insight into the experiences of refugees living in a temporary camp for years that was designed to be anything but permanent. The United Nations High Commissioner for Refugees’ (UNHCR’s) most recent statistics put Dadaab at “218,873 registered refugee and asylum seekers as at [sic] the end of July 2020” (UNHCR, sourced at end of review).

Mohamed’s younger brother, Hassan, has an undiagnosed mental illness or learning disability, nonverbal except for saying “Hooyo” and suffering occasional seizures. We see this through Omar’s perspective as Hassan’s primary caretaker. This relationship is nuanced, depicting Omar as a protective and nurturing older brother sometimes, and at others, one who is annoyed by his younger brother’s behaviors. Later, as the two grow older, Omar realizes he cannot provide adequate care for his younger brother and attend school; he must rely on others for support. And, his younger brother, in fact, thrives at times with this newfound freedom.

Another poignant example of graphic medicine Mohamed’s reckoning with his trauma as a child refugee. Comics scholar Candida Rifkind notes that trauma is particularly prominent in refugee comics: “There are often moments of deep trauma, such as family separation, disappearance, and death” (“Spotlight,” sourced at end). The graphic memoir opens, as noted above, with Omar’s reflection on the loss of his early childhood memories. The next night, Omar narrates that his primary caretaker, an older woman named Fatuma, is not their real mother, so he and Hassan sleep on their own in a different tent. He writes that “Hassan doesn’t sleep very well, and I don’t either. I usually tell stories about our home in Somalia to help us both fall sleep.” (10). On the next page, continues: “But I still wake up with nightmares” – the illustration shows us his exclamation of “Dad!” – and the rest of the page reveals those same, poignant stars looking over the camp of Ifo, people within other tents shouting names and Omar musing “Judging by the sounds all around us, I’m not the only one with bad dreams” (11).

But, when the time finally comes for Omar and his brother to visit with the United Nations compound at Ifo, Omar must confront what actually happened during their escape from Somalia by speaking with the UN resettlement officer. Here, Mohamed, Jamieson, and Geddy’s creative efforts unify in an unflinching depiction of Omar and Hassan’s escape. Mohamed details his father’s death, getting separated from his mother, running from gunshots, walking for days and days—protected by adults—without food as their small group got smaller, until they reached Dadaab. The UN diagnosed him and Hassan as “Malnourished. Malaria. Sick. Dehydrated,” so much so they had to relearn to walk. Geddy’s coloring again is effective here, applying a faded yellow tone to denote the past as is common with graphic memoirs visualizations of memory, but the effect is subtle, and does not wash out or muddy the rest of the oranges and browns used to represent the space of Somalia and Kenya.

Omar’s story is further entrenched in struggling with systems of care, both his own struggles and those around him, whether in finding care for Hassan, facing his own food insecurities, or navigating the bureaucracies of the United Nations and refugee services. Keeping the focus squarely on Omar keeps others’ struggles with healthcare in the periphery until he is unable to avoid them.

Just as Rifkind notes, refugee comics “… find hope in people’s resilience, generosity, solidarity, efforts to build new lives, and creative forms of expression,” (“Spotlight”) and Mohamed hews to this as well. The graphic memoir ends on a hopeful note, with Omar and Hassan finally leaving for America. When Stars Are Scattered ends with Omar staring out at the same starry night sky as the beginning, but this time, through the window of an airplane as a young adult. He muses “For me, the first years are lost,” directly echoing the opening line of the graphic memoir. But, Mohamed ends the graphic memoir moving forward: “I hope that in America, Hassan and I will find our way.”

Ultimately, the graphic memoir serves as a wonderful entry point for bringing graphic medicine to the classroom, whether in grades 5-12 settings or in higher education. There are several educator guides and teaching packets available to accompany the text (including one directly from Jamieson), and even a free sample of the first three chapters. When Stars Are Scattered has won or been shortlisted for many awards (e.g., School Library Journal Best Book of 2020, 2021 Children’s Africana Book Award Honor Book)

Justin Wigard is a PhD candidate and University Distinguished Fellow in the Department of English at Michigan State University. His work on comics appears in INKS: The Journal of the Comics Studies Society 5(2), Vault of Culture, as well as several edited collections. He is currently graduate coordinator for Graphic Possibilities, a research workshop group at MSU dedicated to critical inquiry and engaged pedagogy in comics studies. He is also a Scholarship of Undergraduate Learning and Teaching Fellow for the MSU Lyman-Briggs College, awarded for ongoing interdisciplinary research with Dr. Megan Halpern on “Drawing Comics as a Way of Knowing about Science and Society.” You can find more of his work at his website. 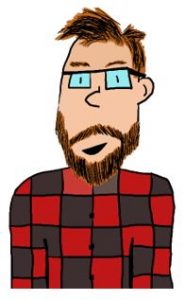