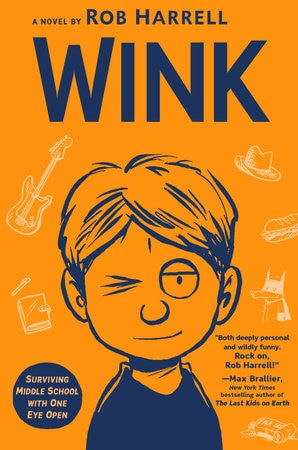 First person fictional memoirs written in present tense have made me wonder. Am I, the reader, supposed to think that the protagonist is writing this memoir after the fact and recalling the events? Or that the character never writes this stuff down but lives the events and I’m virtually watching them as they happen? Or am “I” vicariously the memoirist living out this life? Or should I treat it like a non-fictional memoir in the present tense and I’m being given the gift of entry into the memoirist’s mind and life? And is this tale only made fictional by the writer to give him—I’ve heard Rob Harrell give a talk and this is his pronoun—some distance between the events and his real life. Many events in Wink by Rob Harrell—especially the medical treatments—have autobiographical content. However, the actual timing of the medical treatments for Rob occurred in adulthood and not middle school, when Wink’s story takes place; and the empathy the author has with middle schoolers makes this book seem like an autobiography of actual events in real time. I’m sure there are many other ways to think about such a “memoir,” even jumping between possibilities. First person illustrated fictional memoirs have become very common among middle school books especially after the phenomenally popular Diary of a Wimpy Kid series by Jeff Kinney began in 2007. Ross Maloy is the seventh grade “memoirist” in Wink. Only the medical treatments should be viewed as semi-autobiographical while the rest of the fantastic story is fiction. I highly recommend Wink.

Wink is a story of medical events, friendship, losing one’s invisibility cloak, middle school, finding one’s passion, and misjudging others. Wink is among the most emotionally wrought, both tearful and laugh-filled, middle school books that I’ve read. Wink includes a running comic strip of BatPig handling Ross’ current struggle, including radioactive zapper (radiation treatments), hat (to shelter Ross from any light), and the crush (Ross’ attraction to Sarah Kennedy, a classmate), among ten others. There are over eighty other black and white ink illustrations in Wink. Rob Harrell is well suited for the double duty of writing and illustrating with prior works including Life of Zarf series: Trouble with Weasels (vol. 1, 2014), Troll Who Cried Wolf (vol. 2, 2015), and Troll Overboard (vol. 3, 2016); Big Top (2005, collection of comic strips), and Monster on the Hill (2013) middle school graphic fantasy of villages and their monsters. He’s currently the daily comic strip writer and artist of Adam@Home.

Rob Harrell risked losing his artistic career when he was diagnosed with eye cancer (malignant mucoepidermoid carcinoma of the lacrimal gland) in 2005. The lacrimal gland (aka tear gland) keeps the eye moist and is located above the eyelid away from the bridge of the nose (https://en.wikipedia.org/wiki/Lacrimal_gland on April 24, 2020). This type cancer of the eye is extremely rare (less than 1 per 1,000,000; https://onlinelibrary.wiley.com/doi/full/10.1111/j.1755-3768.2012.02402.x on April 24, 2020) and the average age of a person with this type of cancer is 50 with at least one documented case in a fifteen year old (https://www.ncbi.nlm.nih.gov/pmc/articles/PMC5727657/pdf/CRIOPM2017-2418505.pdf on April 24, 2020). Given this cancer happened to Rob in adulthood and his wheelhouse is middle school books, it’s fitting that Wink takes place in middle school. Rob had non-standard treatments to avoid: losing sight in both eyes, having his cancerous eye and socket removed, and getting a prosthesis; and instead he kept both eyes and over time lost his sight in the treated eye. I heard Rob give a talk on his artistic work, including his cancer, at the Kenosha Festival of Cartooning in 2016.

Many medical terms arise as Wink progresses, and because they’re explained as they occur, their usage is fitting for middle schoolers. The terms include: CT “cat” Scan; biopsy, diagnosis: not benign, very rare aggressive tumor—discussed earlier; prognosis, treatments: remove (resect) the entire eye and socket and fit Ross with a prosthetic eye and disfigurement (First Opinion); Second Opinion: save physical eye, keep socket, no prosthesis, and treatment: 45 proton radiation treatments over eight weeks, prognosis: eventually blind in right eye, sighted in left. Side effects included headaches, temporary hair loss, facial radiation burns, surgical scar (gets him a tender nickname of “Dime Slot” by Jerry, another patient) and painful and dry right eye treated with drops and a cream.

Rob Harrell does a wonderful job of moving these medical events to Ross Maloy who’s also steering through the summer into the fall season of his seventh grade. As I read this entertaining work, I started listing questions that came to mind; like why wasn’t a second opinion sought? Or what was the surgery like? Or what were the side effects? … But all these questions are answered in good time not in any particular order … perhaps how a middle schooler might see events. Wink has a lot of non-medical events for Ross, as well. There are friendships kept and lost, painful bullying with memes, a passion for music, frustrations, anger, school administration interventions, sensitive parents, and a talent show. There are many funny moments between kids and adults.

About the only plus to cancer in middle school is that teachers are more lenient: allowing turning in assignments late, hat wearing during class, faster to give hall passes, and so on. There are many negatives beyond the actual cancer and the treatments. Ross’ biggest negative effects are humiliation connected with side-effects and losing his anonymity which he had enjoyed before his diagnosis. Wink captures pre-teens perfectly with a few making cruel jokes out of his illness, and most feeling sorry for Ross. His best friend, Abby, and Ross have a strong connection, but sometimes Ross’ selfishness, strains the relationship, especially when Abby is looking at big changes in her life that she doesn’t want to happen. Abby and Ross joke around (e.g. She asks if his first radiation treatment turns him into The Hulk—Marvel character?). There are close to fifty different characters in Wink with a handful or so being the most important. There are stories of school and home, of Ross’ parents and stepmom, Ross’ radiation techs, and Abby; and there are peers and adults who are misjudged both positively and negatively. Characters are well-rounded; for example Ross can be a jerk and recognizes that emotions sometimes run high leading to Principal Office visits and to apologies. Ross wants to be “normal” but he’s a long way from it. And what is “normal” anyway? Ross goes through lots of emotional phases, pity, anger, lashing out; and sometimes not recognizing real pain in others.

I have a few minor quibbles with Wink. I understand it’s nice to use real company names in a fictional work to help the reader connect with the characters life, but it’s slightly problematic unless the author wants to have their endorsement implied. Wink mentions about twenty-five commercial businesses some are small local Indiana restaurants (the author is from Indiana) while others are national entities. Middle school books usually don’t include a resource list (e.g. about cancer or treatments) for further inquiries and this book is no exception. There’s at least one HIPAA (Health Insurance Portability and Accountability Act) violation by a medical technician telling Ross about another character’s specific health problems; it’s artistically sound, just not medically ethical.

I have a personal interest in eyesight issues. My father was extremely cross-eyed in his left eye; eventually to the point that only the white of his left eye was visible. He was always very nearsighted; I recall that he read books without glasses by holding them up to his nose as he scanned the page. He was never allowed to get a driver’s license because of his poor sight. He became completely blind in his left eye, except for some light penetrating which allowed him to have some 3-dimensional depth of field. Very late in life his left eye was removed and replaced with a prosthesis. He compensated for his poor eyesight with a phenomenal memory, constant reading, and superb sense of direction. As an aside, my father loved music, but unlike Ross who leaned toward punk and hard rock, my father enjoyed classical and folk music.

Wink ends at the mid-school year holiday break with a satisfying resolution of earlier conflicts. Wink has a very entertaining storyline of Ross struggling and coping with his cancer and treatments; the trials and tribulations of seventh grade; finding a passion in music and having worthy friendships to get him through this difficult period. Wink has an excellent depiction of medicine from a child’s perspective from diagnosis … treatments … side effects … prognosis … and lots of life beyond the medical aspects.