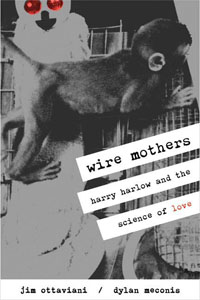 Wire Mothers: Harry Harlow and the Science of Love covers the research of Harry Harlow, an experimental psychologist at the University of Wisconsin – Madison (UWM), from the winter of 1959 back in time to 1950 with Harry as the narrator. Harry’s experiments found that love and comfort was necessary to survive and thrive. For being a relatively short graphic work (84 pages), Wire Mothers does a great job presenting a powerful message and a fairly thorough biography of Harry Harlow. Well done black, white and grey portrayal with a clear narrative. I recommend this graphic biography.

Harry’s research was centered at the street address: 600 N Park. I’m using his first name in this review, because he was so personable and prided himself on writing articles and doing presentations free of jargon. His lab was given the nickname Goon Park for the “6” loosely written appearing to be a “G” with “00 N” of the address completing the word Goon and the experiments on rhesus monkeys which were done there. Harry studied humans indirectly through experimentation on other mammals. Those mammals included cats and rats early on, but the bulk of his experiments were with rhesus monkeys.

Wire Mothers follows Harry from his early ideas through his most significant experiments at UWM. Early on the graphic biography shows a brand new janitor starting to clean the lab finding cigarette butts (Harry chain smoked) on the floor, mumbling prophetically “Think their mothers’d teach ‘em …” to not be so messy, and called it a “zoo” before he encounters Harry sleeping at his desk. It’s 3:00 am, which is typical of Harlow being there so late. The janitor is new and is there for Harry to give him (and the reader) his history and to whom Harry can explain the Goon Park experiments. Harry goes back to his days as a young faculty member in 1950 when he was mistaken as a freshman undergrad, had a speech impediment (“diwect” which he corrects to “direct”), and had changed his name (from Harry Israel) to avoid anti-Semitism.

Harry didn’t like the experimental standard of using rats in only one experiment and then euthanizing them. He initially shared a building with the Dean of Men who didn’t appreciate the smell of the rats.

Harry spoke and wrote in a straightforward way, free of jargon and nonsense. Harry said, in Wire Mothers, “Most of the experimenters never realized these experiments [on rats] were useless, although it must have occurred to some of the rats.” Harlow likes puns, but his audience often didn’t. He uses humorous poetry (which he called “catteral,” being doggerel that didn’t do the trick). The poem for this scenario from the rats’ perspective is:

There is a man behind the glass;

I think he is a stupid ass.

I’ve trained him when I press the bar

To give me food six times an hour

Here’s some confusing background that’s mostly presented at the end of Wire Mothers with non-Harry, universal narration … because it’s confusing. Harry married his first wife, Clara Mears, in 1932 and they divorced in 1946. He married Margaret (“Peggy”) Kuenne that same year. Peggy died in 1971 from cancer, which led to Harry’s clinical depression. He remarried Clara in 1972 and they remained together until his death in 1981. Harry co-wrote with Clara, Peggy and other contributors many articles, including a collection of articles he had previously published, in The Human Model: Primate Perspectives (V.H. Winston & Sons © 1979).

In 1950 Harry, wanting to get away from rats, took Peggy’s suggestion to go to the local Madison zoo to study animal behavior. He studied how primates “learn to learn.” That is, that past gained knowledge helps in future learning. Harry decided primates were more appropriate for him to study. When the Dean wanted his experiments removed, Harry helped build his own lab, which became “Goon Park,” on UWM grounds [now called the Wisconsin National Primate Research Center (WNPRC) at 1220 Capital Court in Madison] where his work with rhesus monkeys occurred.

Scientific wisdom during this time was that one could isolate babies to prevent “germs” from infecting them, teach them appropriate behavior without much physical contact, and otherwise treat them like small adults for them to be well-adjusted and happy. Harry abhorred this wisdom, which mainly came from John B. Watson’s (1878-1958; page 36 of Wire Mothers mistakenly calls him James not John) and B.F. Skinner (1904-1990) who had long argued that only the physical needs of children needed attention. Their emotional needs were irrelevant. Harry found the opposite to be true, that the isolation was detrimental. Not mentioned in Wire Mothers were Watson’s controversial “Little Albert” experiments. The “Little Albert” experiment was to condition fear of a white rat in a child, who initially enjoyed and played with the rat, by hitting a large bell whenever Albert played with the rat. Albert went on to cry at the sight of a white rabbit, white dog and white fur coat.

Wire mothers likely, appropriately took artistic license with juxtaposing Harry’s frustration with psychological wisdom of the day by placing him at an alleged Watson lecture. [I’m not able to confirm if Harry attended such a lecture; Watson died in 1958 and had left psychology for advertising in 1936]. In Wire Mothers over several pages and many panels Harry said, “Not a single use of the word [love] anywhere. The CLOSEST we get in the [psychological] science literature is AFFECTION. And even THAT’S barely used. Everybody talks about ‘proximity’ instead. ‘Proximity.’ Can you believe it? Well I sure can’t.” And has John Watson, President of the American Psychological Association (APA, he had been president in 1915), say in the lecture, “Certainly kissing the child on the back of the hand, or patting it on the head once in a while … these would be all the petting needed for a baby to learn that it’s growing up in a kindly home. Trust them as though they were … young adults. Let your behavior always be objective, and kindly firm. Never let them sit in your lap. If absolutely necessary, kiss them once on the forehead when you say your goodnight. The end is a happy child.” In Wire Mothers, Watson’s lecture audience, except for Harry, was bespectacled and eyeless, symbolic of mindless believers. After the lecture Harry is shown confronting Watson by asking if Watson’s mother & Freud’s & Skinner’s had been doing it all wrong after which Watson was speechless.

Wire Mothers covers Skinner raising his daughter (Deborah) in his creation, the baby tender, a filtered and humidified box, partly sound proof, with the child seeing and being seen through glass. According to psychologicalscience.org (psychologicalscience.org/observer/skinner-air-crib#.WDMfPIZOKEc), the baby tender was to reduce the effect of the harsh Minnesota winters on the child and had no detrimental effects on Skinner’s daughter; this was her crib for her first 2½ years; and only a few hundred of these cribs were ever sold. This was not a Skinner Box, which was used to experiment on small animals. Wire Mothers shows Deborah upset and crying with Skinner narrating, “[Deborah] greets us with a smile when we look at her through the glass! This could be very useful in hospitals—it could save overworked nurses TIME! It can save MOTHERS labor as well!!” Harry became president of the APA in 1958-59. As a counterweight to Skinner and Watson’s behaviorism, Wire Mothers mentions Harry delivering his APA presidential speech, The Nature of Love.

In preparation for a TV interview with CBS—about two-thirds of the way through Wire Mothers—Harry shows some of the rhesus experiments on love; and the reader sees where “wire mothers” (a portion of both types is shown on the book cover) come from. Harry created surrogate rhesus mothers with chicken wire either covered in soft carpeting or left as wire. Both have faces and could have milk bottles strategically placed. Infant monkeys could imprint on either of them as their “mother” depending on the experiment. Harry found the mothers who had soft coverings, where the infant monkey could cling and cuddle, led to better adjusted monkeys. The infants avoided the wire mothers and became attached to the cloth mothers; even if only the wire mother provided a milk bottle. Harry says, “Given the chance #106 [a specific infant] will spend 17-18 hours a day on the cloth mother and less than 1 hour on the wire mother [for bottle feeding].” And if they were nursed on the cloth mother, they ignored the wire mother—“except to explore.” Frightening the infant will send it to its cloth mother whose touch gives the infant confidence to challenge what frightened it. The presence of the cloth mother gives security and confidence to an infant in a brand new environment; and without the cloth mother or even with a wire mother, the infant lies in the fetal position, unmoving. An infant reared with no mother, will remain frightened, insecure and motherless even if a cloth mother is later put in its sight; it rocks back and forth and shows no affection at all. Wire Mothers shows perfectly the insecure/confident rhesus infants as they interact with their environment supervised by wire/cloth mothers, respectively, both visually and narratively.

Wire Mothers mentions, but doesn’t show, Harry’s experiments related to the “Pit of Dispair.” Finally, Wire Mothers doesn’t discuss the animal rights groups which protested Harry’s experiments, especially the ones meant to psychologically damage the monkeys. Though not a graphic work, if you want more on the life of Harry Harlow, I recommend Love at Goon Park: Harry Harlow and the Science of Affection by Deborah Blum, Perseus publisher, © 2002, which was used by Ottaviani and Meconis as a resource.