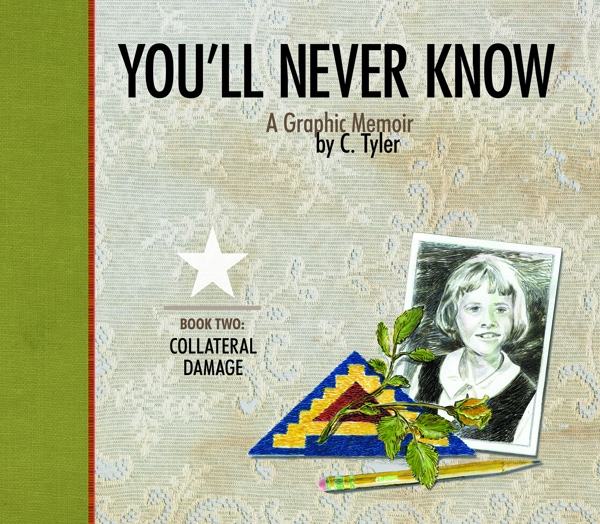 This series of three gorgeous memoirs shares Carol Tyler’s effort to investigate and retell her father’s traumatic experiences in World War II. Along the way we are also witness to struggles with her marriage, raising her daughter, her efforts to be a good daughter herself, and much more. Carol, a painter, has a stunning visual style, and she uses the landscape format of the book, meant to resemble a photo album, to her (and our) great advantage.

Paul Gravett chose You’ll Never Know as the best autobiography/biography of 2012. In his blog post he wrote,

…in the end what floored me, in its level of craft and care, complexity and clarity, was the third and final book of Carol Tyler’s You’ll Never Know, subtitled ‘Soldier’s Heart’. Her husband Justin Green, creator of Binky Brown Meets The Holy Virgin Mary, the seminal work of autobiographical comics in 1972, has made a return to the family here. In their “thorny union”, Green has been an addicted, unfaithful, absentee husband but their daughter’s diagnosis of Obsessive-Compulsive Disorder, like Green’s own, brings him back. A mixed-media scrapbook album in landscape format, Tyler’s graphic memoir also focuses a great deal on her “good and decent” father, a veteran bottling up eruptive, post-traumatic memories of his part in World War II. Towards the end, Tyler shows her parents dancing together at a wedding to their favourite song, for the last time, and realises, “Certainly nobody in the crowd understood the significance of this moment or who they were. Some old couple. How could these kids know them? They’ll never know them. Unless I try to explain, which is a good reason to write a book.” And a good reason to read this and indeed the whole trilogy. 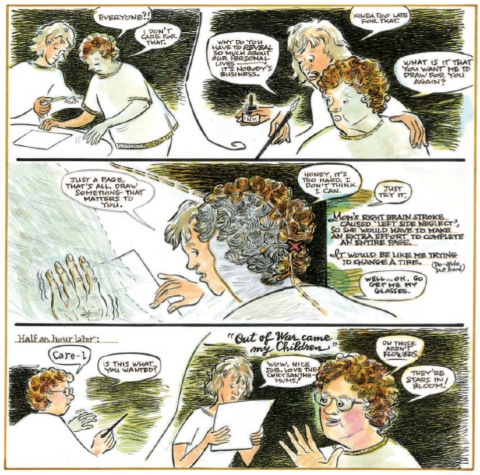 Read an excellent interview with Carol Tyler about the series on the Comics Reporter here.