Pages: 160 pages for each volume

Around college age, I read several of James Herriot’s—pseudonym of James Alfred Wight—books (All Things Great and Small, All Things Wise and Wonderful, etc. …) about the author’s work as a veterinarian in rural England. These non-graphic works were both entertaining and enlightening. I grew up with several pets including Siamese cats, a cockapoo, and tropical fish; and continue to live with cats. I’ve always had great concern for animals and human’s connection to our fellow creatures. Now that I’ve gotten my minimal bona fides out of the way, our medical topic for these book reviews is veterinary medicine.  In Japan, United Kingdom (UK), and United States (US) 18-35%, 51%, and 67%, respectively, of households have a pet. The pets in Japan are primarily 18% of households with cats, 17% with dogs and other pets in declining but unknown percentages being fish, turtles/tortoises, birds, hamsters, and rabbits; in the UK it’s 26% dogs, 24% cats, and 2% rabbits; in the US it’s 53% dogs, 36% cats, 10% fish, and 5% birds. Average lifespans include 8-13 years for dogs depending on size, 12-18 years for indoor cats (2-5 years for outdoor), 7-10 years for rabbits, 2-35 years for fish depending on type (one Koi lived 226 years!), and 5-65 years for birds depending on type. Many people have more than one pet; possibly with different members of the family being responsible for different pets. Yuzu, the Pet Vet by Mingo Ito is a Japanese manga series that began in 2016 and is currently being translated from the Japanese into English by Julie Goniwich with lettering by David Yoo. As the author interjects at one point, publishing Yuzu was a dream fulfilled. So far, the first four of nine known volumes have been published in English. These four volumes include named pets being four cats, ten dogs, one rabbit and one bird; with most chapters about one or two pets—fifty unnamed cats are in a two-chapter story in volume 4. The stories revolve around an animal hospital, Uncle Akihito, a veterinarian, his niece, Yuzu Morino, and the hospital’s free-range Chihuahua, Sora. Topics covered vary from lighthearted humor to serious life-events, including the death of some pets. I highly recommend this series—publisher indicates for ages 8 or more—for their touching stories, beautiful illustrations, and education provided about veterinary medicine and life lessons.

The story begins with a building labeled: Blue Sky City Bow Meow Animal Hospital (AH). Yuzu is eleven years old and provides the narration. Her Uncle Akihito runs the hospital as the sole employee. Pets introduced might have no dialogue or un-ballooned dialogue which only they, among themselves, can understand; humans hear “woof” and “meow” and other animal sounds. Before joining her Uncle, Yuzu has some familiarity with death, because her father died when she was five. Her mom has a persistent cough which results in hospitalization for a never-named lung problem. Initially under protest, Yuzu has to stay and work for her uncle, who lives at the AH.  Four small panels in chapter one volume one show Yuzu overwhelmed with feeding cats, cleaning a dog cage, and being scared dressing a wound on a large dog. And she tells herself, “Doesn’t he know I’m scared of animals?”

Yuzu provides many life lessons that pets teach us including watching their lives unfold, providing companionship and protection, stoicism, helping one overcome their own fears, the meaning of love, honesty in strength and weakness, the results and dangers of maltreatment, facing their deterioration and sickness, and dignity in death. And all of these lessons have their human counterpart.

There are human stories too; for example, some kids crush for the cute vet Uncle; there’s a TV star substituting a healthy for sick dog to stay relevant to the public which almost leads to maltreatment of the sick dog. Pet jealousies occur from humans paying too much attention to a different human or pet. It takes a while for Yuzu to make friends at her new school. Most of the stories are for pets among Yuzu’s classmates, so she sees her peers at school, possibly their home, and the AH.

Volume 2 includes a tale of a guide dog, Luke, who was puppy-raised by one of Yuzu’s classmates, Kidô. Puppy-raising in Japan is fostering potential guide dogs to socialize them for about their first year. Guide commands to the dog are in English with parenthetical descriptions of the meaning of each command; for example, HEEL (stand to my left); while the dog is harnessed. Even in Japan, guide dogs are given English commands. They’re trained to stay calm and work when their harnesses are put on. Puppy-raisers aren’t allowed to see their dog again until they retire to prevent the guide dog from getting confused between work- and play-attachment. Non-owners of guide dogs aren’t supposed to interfere with, or even pet, a guide dog.

Yuzu’s fear of animals dissipates over time, though revives with rabbits (patient seven in volume two) who make no sounds and Yuzu can’t “read;” so, she learns more about rabbits at her Uncle’s suggestion. Rabbits are shy and startled by sounds because their hearing is much better than people’s. “For example, Rabbits hop in place when … happy, some sleep with [open eyes] …” and petting shouldn’t include their sensitive ears, only their backs.

Pets promote empathy as demonstrated in human’s feelings about their pet at the end of the pet’s life; which can be similar to son’s or daughter’s feelings about their parent to prolong life no matter the quality. But what are the dying person’s/pet’s desires? These are tearful tales. Rainbow bridge story/poem is provided in one tale (patient 10 in volume three).

We learn a dog’s life expectancy and how their age compares to human lifespan. In the very first (sorrowful) story of volume one, Yuzu recognizes her mother’s downplaying her own illness is the same as an elderly dog bravely hiding his own illness from his human child owner. Animal shelter adoption events are discussed. “Approximately 80,000 dogs and cats are euthanized every year in Japan [volume 4 chapters 1-2].” Yuzu provides the typical adoption rules (e.g., home suitable, enough annual income to cover food and veterinary expense, responsible for pet training, and keep them for the rest of their lives).

Specific veterinary medicine issues, which are mentioned (some with more details than others),  include: dilated cardiomyopathy (unhealthy heart pumping blood); Cushing’s Disease from pituitary gland tumor; a cat eating a small battery which could cause poisoning or its acid causing internal destruction; dementia; pet faking illness to get attention; struvite bladder stones causing urinary tract blockage treated with diet and possibly surgery to remove the stones; rabbit’s sore hock (aka ulcerative pododermatitis) causing painful paw typically; feline calicivirus (FCV) a flu; how to brush a cat’s teeth; chemotherapy for liver cancer vs. comfort care in a cat; pros and cons and meaning of spay or neutering a pet; emergency C-section on a cat; and a parakeet breaking her leg due to calcium deficiency (birds like humans need vitamin D3 or from sunlight to absorb calcium and birds’ bones are hallow to fly more easily). One story (last one in volume four) has “Ted, the ball-Loving Dog,” disabled from sudden acquired retinal degeneration (SARD), which is incurable resulting in sudden blindness with unknown cause. Dogs naturally have worse eyesight than humans, and can’t see color, but their hearing & smell is much better than humans. This story shows how both Ted’s shy owner, Kokomi with a controlling mother, and Ted can grow closer; learn to assert themselves to teach Mom about their independence, and thrive because of this disability.

The series’ English version is left in standard (right to left) manga format. The original untranslated and translated sound effects are maintained because their onomatopoeia hand-lettering is part of the artistry. As a symbol of wide-eyed innocence, Yuzu and the pets have “big eyes,” which are often on display in manga children and cute pets. To overemphasize “cute” a chihuahua, named Sora (means “sky” from translator notes), has a heart on her cheek. And when adults act cute the manga convention is to draw them as children; or perhaps a child’s head inside their word balloon. Sora can turn angry and bite when Yuzu acts unknowingly rough. Anger is shown with empty or darkened eyes.

Often there are small background pictures and dialogue—called Easter eggs—that are fun to find and pay attention to.  Sometimes there are marginal messages from Mingo Ito, Yuzu’s creator—or perhaps from a critter—as if talking directly to the reader. The illustrations, showing humans and pets aging, are excellent; each character/pet has their own personality/petality. At the end of each volume there are translator notes, behind-the-scenes chapter summaries, special thanks, and an art gallery of pets.

I found a few shortcomings with this series, but I doubt children—the most likely readers—will agree with me. The table of contents provides page numbers for the start of each chapter—four per volume—but the rest of the book has almost no page numbers, so any quotes herein aren’t paginated. Yuzu misses her best friend, Emi, from her life before she moved to the AH. They reconnect at the end of one tearful story (patient three volume one), but Emi is never seen or mentioned again. For myself, I prefer direct explanations, even to children, about life events. To ease the death of a pet Yuzu tells a younger child the pet has gone to Heaven, whereas I would’ve preferred that Yuzu had explained the pet, Leon, is no longer present, but our love, grieving, memory, and what we learned from Leon will live on in each of us—including the reader—touched by Leon. Yuzu is unpaid though she puts in lots of hours at the AH, including on the weekend. Learning about money should start at a young age. Though the Uncle appears overworked, there are no other people working at the AH, besides Yuzu and her Uncle. The amount of cuteness becomes cloying at times. We don’t learn why Yuzu’s mother has to remain hospitalized even though months pass. It would have been helpful to get background about Yuzu’s Uncle’s veterinary education. I’d like to see stories about more exotic pets beyond the one bird and one rabbit tale. And finally, probably because of the series’ expected youthful audience, the veterinary treatments are not very detailed or technical. Of course, some of these issues might be resolved in the not yet translated remaining (at least) five volumes.

There are many life lessons provided in Yuzu, like “Accepting a new cat into your heart … doesn’t mean that you’re betraying your old cat [patient three volume one].” One can apply the same idea to making new human friends. We see pet vs. human stubbornness; the need for patience; and for pets and humans to find common ground. Pets are great listeners. And with pet ownership comes great responsibility!

I dedicate this review to my cats: 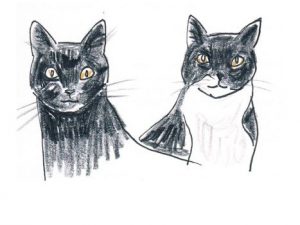