We are very excited to announce that our very own MK Czerwiec, a.k.a. Comic Nurse, will be a keynote speaker at our Brighton conference in July. Most people reading this post will be aware of MK’s stella contribution to the field of Graphic Medicine over the last 10 years, and it is fitting that she will give one of the two keynote addresses to the 10th international Graphic Medicine conference. 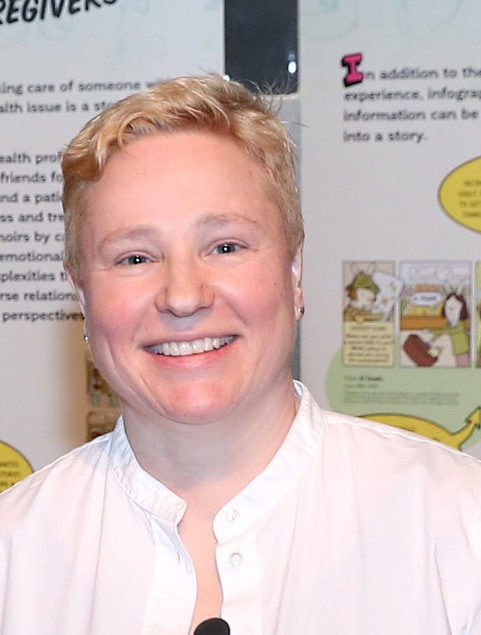 MK is a Senior Fellow of the George Washington School of Nursing Center for Health Policy and Media Engagement (Washington, DC) and the Artist-in- Residence at Northwestern Feinberg School of Medicine (Chicago, IL). Her clinical nursing experience is in HIV/AIDS care and hospice care. MK has been making comics under the pseudonym Comic Nurse since 2000. She has an MA in Medical Humanities and Bioethics from Northwestern University, where she teaches a course she designed called “Drawing Medicine” to first and second year medical students. She also co-teaches a cross-curriculum course on Graphic Medicine at the University of Chicago. She has a BSN from Rush University in Chicago and a BA in English from Loyola University Chicago.

She is the creator of Taking Turns: Stories from HIV/AIDS Care Unit 371 (Penn State University Press, 2017) which was chosen as one of JAMA’s “Best of Graphic Medicine 2017″ and nominated for a 2018 Excellence in Graphic Literature award. MK is a co-author of the Eisner-nominated Graphic Medicine Manifesto (PSU Press, 2014). She is a co-manager of GraphicMedicine.org and host of the Graphic Medicine podcast. MK travels widely to teach about about Graphic Medicine, with specific focus on comics and end of life. Her next book will be the edited anthology Menopause: A Comic Treatment. She is also contemplating a follow-up graphic memoir, which will be about medical decision making, the history of medicine, and her mother.