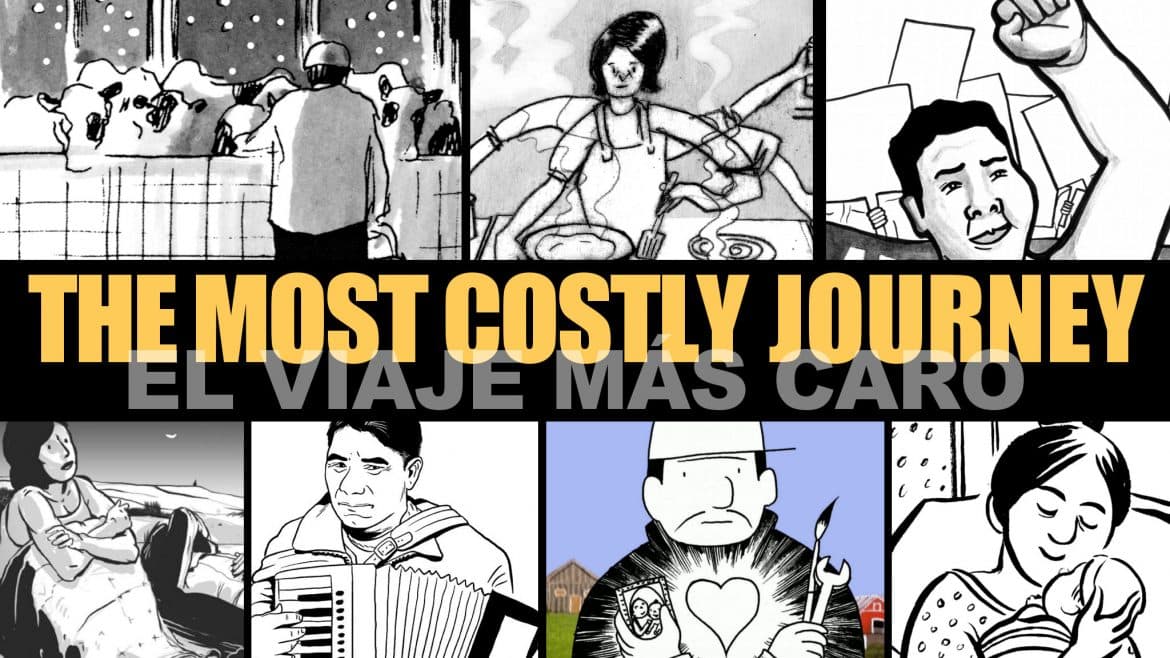 “The Most Costly Journey (El viaje más caro)” is an ethnographic cartooning project that employs collaborative storytelling as a tool to mitigate loneliness, isolation, and despair among Latin American migrant workers on Vermont dairy farms. The collected comics are now available for pre-order in an English language edition via the group’s Kickstarter (through 9 November 2020).

The following is excerpted from the book’s preface by Julia Doucet (RN, Open Door Clinic), which describes the project’s genesis in her patients’ undiagnosed symptoms…

I first met José Luis in 2017 when he came for an appointment at the Open Door Clinic in Middlebury, Vermont. As a free health clinic that serves uninsured adults, it is not uncommon to have Spanish speaking immigrant farmworkers as patients. In fact, half of all the patients we see are Latinx agricultural workers who come from the southern states of Mexico or northern Central America to work in local dairies.

Before he came to Vermont, José Luis had never left his small village in the mountains in Chiapas, Mexico. As time went on he found it increasingly difficult to feed his four children and pay for their books and uniforms at school. Eventually, he decided to migrate to the United States to find work.

The initial decision to come to the United States is often no decision at all, but rather a necessity forced upon able-bodied men trying to survive where there are very few opportunities to do so. The southern states of Mexico from which these men come are generally rural and impoverished. Faced with limited economic mobility or opportunities, many boys abandon education after primary school to work on subsistence plots of land with their fathers, uncles, and cousins. School both costs money and leads to loss of income due to fewer bodies working in the fields. The lure of stable employment and good wages in the US is tempting, despite the tremendous risk involved in the journey.

By the time José Luis reached our clinic, he had a host of physical complaints including many months of nonspecific abdominal pain, stomach cramping, and occasional bloating. His head hurt. His bones hurt. He was tired but unable to sleep. He had little appetite and had lost weight. After many appointments, diagnostic imaging and lab tests, everything came back normal. We could find no medical explanation for his symptoms.

José Luis was not alone. He was one of many of our farmworker patients who presented with physical symptoms that could not be diagnosed as somatic illnesses or injuries. Ultimately, not one of these patients was diagnosed with a medical disorder. We concluded that their physical symptoms were manifestations of chronic stress and anxiety. They all suffered from psychosomatic illnesses stemming from their separation from family, patria, language, and culture. Stripped of all things familiar and comforting, and thrust into the cold, dark, rural countryside of Vermont, they were overwhelmed with a suffering they could not name or confront.

As a registered nurse working directly with these men, I was at a loss as to how to help. Mental health clinicians in our state are overburdened and have long wait lists. They are generally not bilingual or bicultural, and care is expensive. For these patients who are most often from rural, impoverished areas in southern Mexico, mental health counseling is not culturally familiar or recognized. The care they might seek at home, the treatment from curanderos (traditional healers) and priests, herbalists or hueseros (bone setters), is not available here.

As Middlebury College Counseling Director Ximena Mejia, told me, “There is a lot of power in sharing one’s story.” That struck me. Could simply bearing witness to someone’s truth and experience be the key that allowed us as clinicians to help? Would sharing and hearing other workers’ stories help our patients feel less alone?

Thirty-eight percent of the Latin American migrant workers in Vermont have less than an eighth-grade level of education, and even those with more education are often uncomfortable reading blocks of text. Almost ten percent of the population are indigenous language speakers whose second language is Spanish. How could we collect stories from everyone who needed support? How might we share them with others? The challenges were daunting.

Later that week I serendipitously heard a piece on our local public radio station about the Center for Cartoon Studies (CCS), a school dedicated to teaching cartooning, located right here in Vermont! I realized that using graphic art to illustrate the workers’ words was a perfect solution. Comics are a culturally familiar medium in Mexico that historically has been used to communicate information to low-literacy people, and to address everything from entertainment to politics.

Maya Angelou once said, “There is no greater agony than bearing an untold story inside of you.” This project provides an outlet for workers to begin processing their experience, understand their emotions, and ultimately to gain acceptance. Being able to bear witness to someone’s story is both a humbling and deeply touching experience. It is incredibly powerful to accompany someone on their path to catharsis and healing… These stories (and the resulting collaborative comics) share individual voices about individual experiences, but they speak to the broader experience of what it means to be an immigrant, feel like an outsider, and overcome adversity.

EL VIAJE’s creative collaboration between migrant workers & cartoonists has so far resulted in 19 different booklets that have been distributed in VT migrant communities for years. For more about the upcoming English edition the comics, see the group’s Kickstarter campaign: www.kickstarter.com/projects/elviajemascaro/the-most-costly-journey-graphic-novel