UPDATE: FRAMES HAS BEEN POSTPONED DUE TO THE COVID 19 PANDEMIC.

Organisers say they will reschedule both FRAMES and TRANSITIONS for the autumn. 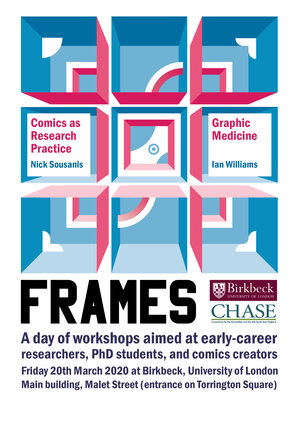 With support from CHASE the annual TRANSITIONS symposium has been extended with FRAMES, a day of workshops for CHASE researchers. The workshops are Graphic Medicine with Ian Williams and Comics as Research Practice with Nick Sousanis.

The workshops are focussed on comics and arts as part of the research process, but are open to all research students affiliated with CHASE institutions.

There has been an increased interest in medical humanities and ‘graphic medicine’ in recent years. Patient narratives and autobiographical comics, or ‘autographic fiction’ are areas of research interest to those in medical humanities and among researcher-practitioners. Dr Ian Williams, who coined the term and the founder of the Graphic Medicine International Collective, will outline the evolution of the movement discuss his own, semi-autobiographical work, and examine some of the applications of the field with regards to research and practice.

Dr. Ian Williams is a comics artist, writer and physician. His graphic novel, The Bad Doctor, was published in 2014 and the follow up, The Lady Doctor, in 2019. He studied Fine Art after medical school and then became involved in the Medical Humanities movement. He named the area of study called Graphic Medicine, founding the eponymous website in 2007, which he currently co-edits. He is co-author of the Eisner-nominated Graphic Medicine Manifesto. He has been the recipient of several grants and has contributed to numerous medical, humanities, and comics publications. Between May 2015 and January 2017 he drew a weekly comic strip, Sick Notes, for The Guardian.

Join Nick Sousanis for a a look into his process of making comics as research method and explore how we gets students making comics in his classes. This will segue into an interactive workshop taking participants through exercises demonstrating how anyone can make comics as a way of expanding their modes of inquiry and discover ways to incorporate comics as vital teaching tools for critical thinking in the classroom. (No drawing experience required.)

Dr. Nick Sousanis is an Eisner-winning comics author and an assistant professor in Humanities & Liberal Studies at San Francisco State University, where he is starting an interdisciplinary Comics Studies program. He is the author of Unflattening, originally his doctoral thesis, which he wrote and drew entirely in comics form. Published by Harvard University Press in 2015, Unflattening received the 2016 American Publishers Association Humanities award for Scholarly Excellence and the 2016 Lynd Ward prize for Best Graphic Novel. Sousanis’s comics have appeared in Nature, The Boston Globe, and Columbia Magazine. More at http://www.spinweaveandcut.com or on Twitter @nsousanis

Please email Dr Hallvard Haug at h.haug@bbk.ac.uk confirming your CHASE affiliation to secure a place. Please indicate if you are attending both workshops.

Bursaries are available to all CHASE students for travel and accommodation to attend the events. Participants are also encouraged to attend TRANSITIONS on the following day.

The Transitions: New directions in comics studies symposium has been held at Birkbeck since 2010. Transitions is a forum for new research  in  comics and graphic narrative,  and especially welcomes research students  and  early  career  researchers. For more information on Transitions, see http://www.ccl.bbk.ac.uk/events/transitions-symposia/