Home / Latest / George McBean – Where to Draw the Line.

George McBean has been producing work for UNICEF for over 36 years, using his skill in the popularising of scientifically proven health information to produce graphic art to be used in the prevention of disease. He has spoken widely about the use of comics and graphics in health education.

It is clear that George was involved in the work that we have, latterly, called Graphic Medicine, for many years, way before this website was launched and it was marvellous to hear from him when he got in touch after reading the recent BBC article. George was kind enough to write the following article  and show us the work from some of his many projects. His website is well worth a visit, and includes information specifically relating to comic books: from the development of the first ‘Asuivre’ style monthly comic book in Nepal called Nova Drishya to the story of Sam and the Sex patch created for the HIV/AiDS awareness program in the Caribbean in the 1990’s.

During the 1980’s I was part of a team of artists and colleagues in UNICEF who helped to put a line through ‘diarrhoea related deaths’ as the most common killer of children under five in Nepal. A substantial list of other child-killing conditions remained but the success of this programme, in combating child deaths from diarrhoea. prompted UNICEF and WHO to highlight in their later publications (such as All for Health and Facts for Life) how important the illustrative arts are in communicating essential health messages.

From global goals to instruction delivered in homes. 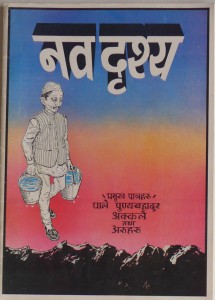 The United Nation’s Security Council responds to political emergencies almost on a daily basis. And among the hoopla of publicity that surrounds the Security Council’s actions (or non-action) many people forget the ongoing work of the UN’s humanitarian organisations and their global goals, which can take years to achieve.

These global goals, (such as universal education; healthcare, and clean water supply etc) can, of course, be badly affected by political turmoil and corruption in countries, but, by and large, the majority of civil servants around the word are working quietly to achieve these aims.  When it comes to having the most impact on health and education of people in the poorest countries, it is the efforts and budgets of this collective body of local people (working for national health and education ministries) that, in scale, far exceed the efforts of any aid organisation or charity.

For example, it is the scale of influence that differentiates the work of Save the Children and UNICEF. In Nepal in the 1980’s Save the Children UK set superb standards for clinics in several districts across the country.  Anyone visiting these clinics as a patient (or as a celebrity helping to raise money) could not fail to be impressed by their standard of health care. Visiting the district next door, however, was a different story. Children were dying in large numbers as a result of dehydration due to diarrhoea. Nationally, diarrhoea-related deaths took the lives of an estimated 45,000 children every year and in a population of 16 million it was the single largest killer of children under five.  The government health network struggled to extend even basic health services to all 75 districts. It was part of UNICEF’s mandate at the time to help the government provide better Save-the-Children-type standards, to the whole country.

At that time there were only 600 doctors in Nepal, mostly based in Kathmandu and a few other major cities, while research told us there were an estimated 400,000 faith healers (Dhami’s and Jankaris) who were found in virtually every community. During the rainy season, when the incidence of diarrhoea was highest, faith healers would make around 12 house calls a day, to help mothers save their dying child. However, in the majority of consultations the faith-healers were giving the wrong advice. They told families to withhold liquid from the child, their logic being that if no liquid goes in nothing will come out.  As a result children were dying of thirst.

It became clear to UNICEF that this largest single killer of children in Nepal, was not a medical problem but a communication problem.  How, then, could these deaths be prevented?

The training of doctors was an ongoing process for the government but the long term cost of staffing every health post to the standard of a Save the Children clinic was phenomenal, and a far off goal. It took up to six years to train a doctor and even then, when sent into the hills, they had little time to practice the medicine they’d learned because their clinics were full of mothers with children suffering from diarrhoea.

It was clear that part of the communication challenge was to spread awareness among families of a life saving drink, containing salt and sugar mixed in water (called Nun Chini Pani in Nepal). This oral rehydration solution (ORS) was successful in Bangladesh and India in drastically reducing the number of diarrhoea-related deaths. Yet in Nepal at that time only 12% of the population knew anything about it.

Next we had to reach as many faith healers as possible and help them understand they needed a new (science based) message to save children’s lives. With only about 20 % of mothers able to read and very few faith healers being literate, the next step in the communication challenge was to design the sort of communication products that would carry the message of ORS far and wide and would seize the attention of a non-literate audience.

UNICEF assembled a team of local artists, including comedians Madan Krishna and Hari Bunsha and an innovative series of communication efforts were created including travelling puppet shows (featuring faith healers) and comic radio routines. Local artists were trained by UNICEF in film-animation and a quarterly comic book called Nova Drysha was produced featuring faith healers in the ongoing story of Pale Punya, the lowest paid worker in a remote health post.

Once the message of Nun Chini Pani ORS was prepared in a series of creative ways the challenge then was to try and reach out to the remote hills of Nepal, to positively influence the faith healers and make sure that, in every household that possessed salt and sugar, parents could correctly mix ORS.

In Nepal at that time there was virtually no mass media: no TV, no phone service and poor postal coverage. Most ‘messages’ were hand carried by people who walked up to two weeks between village and larger trading towns at a road-head.  Radio was the most widespread form of communication but still limited mostly to towns. Radio was useful to encourage use of ORS but not good at demonstrating its preparation. Also there was no ‘pope’ of the faith healers. no leader who could influence all the profession as a whole, so UNICEF recruited a volunteer ‘army’ of retiring Gurkha soldiers to seek out the village faith healers and teach them how to mix Nun Chini Pani.

To aid them in their task UNICEF designed a memory card for faith healers showing how the ORS was mixed properly. These playing-card size instructions were printed and distributed and to this day they can be found in remote villages tucked in the hat of faith-healers, why, because on the other side of the card we printed their favourite god Durga.

In the space of three years, from 1985-88 UNICEF’s project in Nepal took awareness of ORS from 12% to 96% of the population. Figures for a reduction in diarrhoea related infant mortality took years to emerge but some ten years afterwards the National Health Survey showed a reduction in diarrhoea related deaths of 52%.  Not all of this can be accredited to comics in the Nun Chini Pani effort, since many other programs included the supply of clean water and latrine construction,  but as an artist working for seven years on this UNICEF programme in Nepal is has to be one of the most rewarding lines I have drawn: to help score off diarrhoea related deaths from the top of the ‘single most killer’ list for Nepal’s children. The next step of course is to score this preventable ailment off the list around the world. It is only then through eradication of these preventable deaths that the UN counts it a success and we can really tick the box and pat ourselves on the back.

Here is a talk George gave in Denmark which links illustrative graphics to film animation.