The theme of this year’s annual meeting of the American Society of Bioethics and Humanities was “Tradition, Innovation, and Moral Courage.” The meeting was held October 24-27 in Atlanta, GA. (Photos by Michael Green.)

From the abstract for the panel “Graphic Medicine @ Work: Outcomes When the Intervention is a Comic” :

The last several years have seen a rise in graphic novels depicting medical experiences and graphic stories used for patient education purposes. A handful of preliminary studies suggest that the use of illustrations on health instructions increase patient engagement with and recollection of the information presented. Three studies further investigating the impact of graphic information on patient research participation across the lifespan will be presented on this panel.

The first presentation described a study using comics for health education in a pediatric population. This comic, Iggy & The Inhalers, turns ordinary asthma medications into brave super-heroes and common allergens into monstrous villains. Using comics, animation, and trading cards, this project helps kids understand how to take control of their asthma. The series is entirely created, drawn, and produced through the collaboration of a physician/cartoonist and a health communication specialist. A grant-funded pilot study is underway to evaluate the effectiveness of this multimedia project in newly diagnosed asthmatic children at 3 locations: a private practice, an outpatient allergy clinic, and an inpatient hospital unit. The creators will share project background, audience testing results, and outcomes from the pilot study. 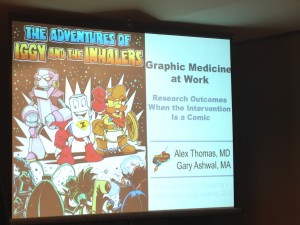 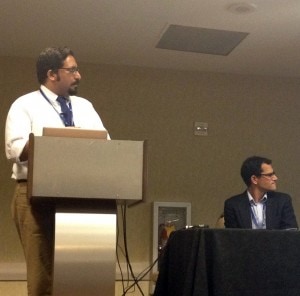 Gary Ashwal discusses his work on Iggy & The Inhalers

The second presentation detailed the experience of developing and testing a comic assent for children ages 12-18 enrolling in a research biobank. The effect of the format of the assent on participant preference and comprehension was described. Although there is not a lot of data about children’s understanding of assent, the few studies that have looked at comprehension suggest that children do not fully understand the information presented to them about research participation. Preliminary data shows that multimedia assent forms may improve children’s understanding. In order for the concept of assent to be meaningful, it is critical that minors are given enough information to understand the consequences of participating in research, and that their input is respected. The minor does not need to understand all the details about the project, or be able to evaluate all the potential risks and benefits, but the child must be given enough information to be able to make an affirmative decision to participate in research. Simply providing the pertinent information is not enough, though; it must be presented in a way that the child can understand.

Leah Eisenberg describes her work with Rose Anderson at Mayo Clinic’s Center for Innovation on a comic-form assent for biobanking, and its use with an adolescent population. 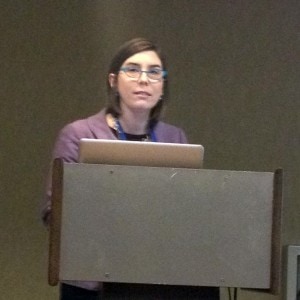 The third presentation described the addition of a comic as an educational tool for adults to an existing study. The comic “Mrs. B Changes Doctors” aims to improve clinic handoff between graduating medical students and the incoming clinic students. The comic is targeted to adult clinic patients in an attempt to engage patient attention, model the transition process patients will experience, and to empower patients to play an active role in the transition process. The decision to include the comic in the study, as well as patient reaction to the comic and other outcomes of the first use of the comic in this study was discussed in this final presentation of the panel.

An excerpt from the comic used as an intervention in the EPOCH study, “Ms. B Changes Dotors” 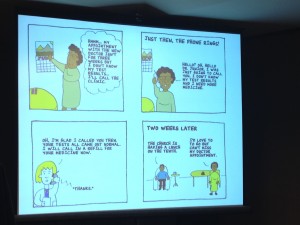 MK Czerwiec describes the process of creating the comic in collaboration with the EPOCH team.

The panel was very well received. One physician in the audience clearly had a conversion experience to Graphic Medicine. He stood up and said during the Q&A, “I sure wish this was an option when I was in medical school!”