In this first of what will be a long series of podcasts arising from the 2013 Comics & Medicine conference, we hear Paul Gravett‘s rundown of Graphic Medicine work that has come to his attention in the past year. His talk is titled, Frames of Mind: Reflections on Medicine in Comics: An Introductory overview of the past, present, and future. Most of the titles he discusses in his talk, and ones recommended by the conference audience, are linked in this earlier blog post.

The audio from Paul’s talk begins and ends a bit abruptly, but is intact otherwise. During his talk, he references two clips that he showed the audience from a comic adaptation of Paco Roca’s Arrugas. The sound of these clips has been edited out of the talk so you can instead watch them yourself. This is the first clip:

And here is the second. 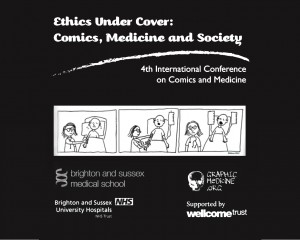